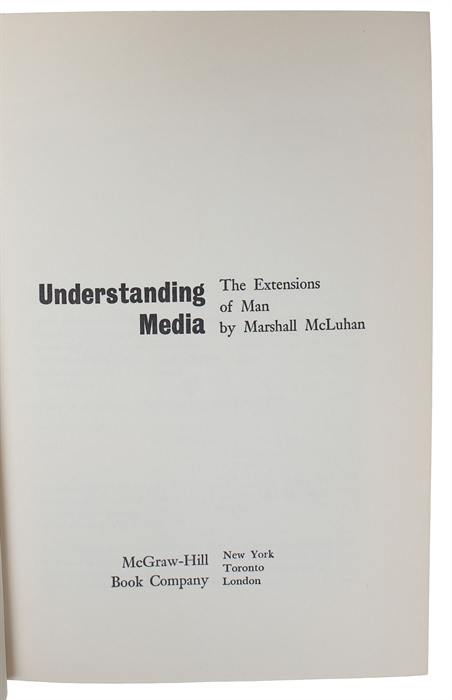 "THE MEDIUM IS THE MESSAGE"

Understanding Media: The Extensions of Man.

First edition, first printing, of this pioneering study in media theory, which completely revolutionized our understanding of the process of communication and the development of the mind of mankind, from the invention of movable type through to the electronic age; THIS WORK ACTUALLY PREDICTS THE WORLD WIDE WEB AND TODAY'S INFORMATION-DEPENDENT PLANET, making it "the most important book ever written on communication". It is in this groundbreaking work that McLuhan first coins the phrases "global village" and "the medium is the message", completely rethinking our society. Due to this marvel of a book, written twenty years before the PC revolution and thirty years before the rise of the Internet!, "Marshall McLuhan has become an "ism". McLuhanism is a new approach to the relations of man and his technologies, and a radically fresh concept of our electronic world... Marshall McLuhan is a philosopher for the age of electronics, and a humanist for the age of communications. Seeing all of our new technologies as extensions of our senses, he examines the implications they hold for the very nature of human society" (From the front flap of the 5th printing of the work).

Herbert Marshall McLuhan (1911 - 1980) was a Canadian philosopher of communication theory. His most famous and influential work is "Understanding Media", in which he coins his two most widely known and repeated phrases, but he has also written other highly important works in communication theory, and his work is viewed as one of the cornerstones of the study of media theory, as well as having practical applications in the advertising and television industries.
Although he was a fixture in media discourse in the late 1960s, his influence began to wane in the early 1970s. With the arrival of the internet, however, his works have experienced a great renaissance and he is now considered the most important media thinker of all times and his main work, "Understanding Media", the most important book on communication.

"When Marshall McLuhan first coined the phrases "global village" and "the medium is the message" in 1964, no-one could have predicted today's information-dependent planet. No-one, that is, except for a handful of science fiction writers and Marshall McLuhan. Understanding Media was written twenty years before the PC revolution and thirty years before the rise of the Internet. Yet McLuhan's insights into our engagement with a variety of media led to a complete rethinking of our entire society. He believed that the message of electronic media foretold the end of humanity as it was known. In 1964, this looked like the paranoid babblings of a madman. In our 21st century digital world, the madman looks quite sane. Understanding Media : the most important book ever written on communication. Ignore its message at your peril." (Official review of the 2001 Routledge Classics-edition).

The first printing is difficult to come by in general and is very rarely seen in a nice dust-jacket.