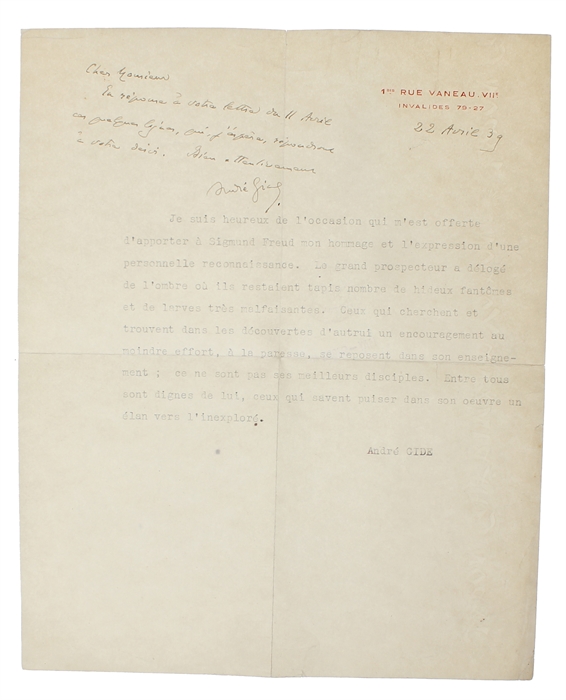 A SPLENDID COPY OF FREUD'S SECOND MAIN WORK, WITH AN INTERESTING NOTE FROM ANDRÉ GIDE

8vo. Original printed wrappers. Uncut and unopened. In perfect condition in- as well as ex-ternally. (2), 83 pp. Housed in a full burgundy cloth box with gilt leather title to spine. Inside of box with the book plate of Pierre Bergé. Laid in is a typed letter from André Gide with a four-line handwritten and signed ("André Gide") note dated "22 Avril 39".

Scarce first edition, in impeccable original condition and with an inlaid letter from André Gide, of one of Freud’s most significant works, his seminal Three Essays on the Theory of Sexuality.

It is this groundbreaking - and to this day highly controversial - work that lays the foundation for the concepts of penis envy, castration anxiety, and the Oedipus complex, apart from defining the entire theory of childhood sexuality.

Together with The Interpretation of Dreams, The Three Essays on the Theory of Sexuality (also sometimes translated as Three Contributions to the Theory of Sex) constitutes the most significant of Freud’s works. It is here that the founder of psychoanalysis advances his theory of sexuality, in particular its relation to childhood, a theory that came to permeate through all of his later writings and that came to define psychoanalysis for decades to come.

The book covered three main areas that remain at the heart of Freudian psychoanalysis: sexual perversions, childhood sexuality, and puberty.

Die Sexuelle Abirrungen ("The Sexual Aberrations"), the first essay, commences by distinguishing between the sexual object and the sexual aim and tries to define what is “normal” within sexuality – an endeavor that in itself has been the cause of much controversy.

Freud’s descriptions of infantile sexuality were considered outright scandalous and it would be another decade before they were reconized as essential to the understanding of human behavior and development.

Freud's discovery of infantile sexuality radically altered the perception of the child from one of idealized innocence to one of a person struggling to achieve control of his or her biological needs and make them acceptable to society through the influence of his or her caregivers (see Fonagay and Target 2003).

In Die Ungestaltungen der Pubertät (The Transformations of Puberty), the third essay, Freud formalised the distinction between the “fore-pleasures” of infantile sexuality and the “end-pleasure” of sexual intercourse. He also demonstrated how the adolescent years consolidate sexual identity under the dominance of the genitals.

Freud himself considered his “Three Essays” the epitome of his work, in which he linked his theory of the unconscious as put forward in The Interpretation of Dreams and his studies of hysteria by positing sexuality as the driving force of both neuroses (through repression) and perversion.

Laid-in is a machine-written letter from André Gide, with a four-line handwritten note to top, signed in full by André Gide and dated 22 of April 1939, five months before Freud dies. The letter is an hommage to Freud, excpressing gratitude and admiration for "the great prospector, [who] freed himself from the shadows where many hideous ghosts and malevolent larvae lurked" (translation from French). We do not know who the recipient of the letter was, and though it seems to have been meant for publication, perhaps in a celebratory volume for Freud, it never was.

It comes from the collection of Philippe Helaers and was displayed at the 2007 UNESCO exhibition "Are you a doctor, sir?", in the honour of Freund.

"We learned of this beautiful letter from André Gide during the preparations for the exhibition, currently presented at Unesco: “Are you a doctor, sir? », organized in tribute to Sigmund Freud under the aegis of the School of the Freudian Cause.
… Its owner, Mr Philippe Helaers, acquired it a few years ago in London, without the envelope which could have enlightened us as to its recipient. Was it James Strachey? Leonard Woolf? These are the most plausible hypotheses. The collection of tributes, in which it was to be published, never saw the light of day. Why ? We do not know. Did Freud read it? We don't know that either. In the quest to solve these conundrums, the Journal of André Gide is unfortunately of no help to us. The author of Terrestrial Foods – the only work by Gide listed in Freud’s library – always considered that he had practiced Freudianism without knowing it, in particular in his Corydon. In any case, the awe expressed in this letter clashes with the famous page of his diary, where he describes Freud as “an imbecile of genius”. That was, it is true, the day after his brief experience of psychoanalysis with Eugenia Sokolnicka. In Les Faux Monnayeurs, she is mentioned under the transparent pseudonym of Madame Sophroniska. The allusion to the unequal disciples of the master at the end of the 1939 letter is undoubtedly in allusion to this encounter." (Translated from French from Dans la cause freudienne 2007).

André Gide (1869-1951) was a highly important French author, recipient of the Nobel Prize in Literature, considered "France's greatest contemporary man of letters" and "judged the greatest French writer of this century by the literary cognoscenti" (The New York Times).

Gide's work centres around the reconciliation of freedom and empowerment with moralistic and puritan constraints. He continuously strives to towards intellectual honesty, and his self-exploratory texts are groundbreaking in their search of how to be fully oneself, including owning one's sexual nature, without at the same time betraying one's values. As a self-professed pederast, Freud's seminal "Three Essays on the Theory of Sexuality" played a dominant role in his quest to understanding and owning his sexual nature.

G&M: 4983 ("Freud opened up a new territoryfor exploration - the unconscious mind. His studies of the sexual instinct explained the reasons for, and suggested the treatment of, various perversions and neurotic conditions").