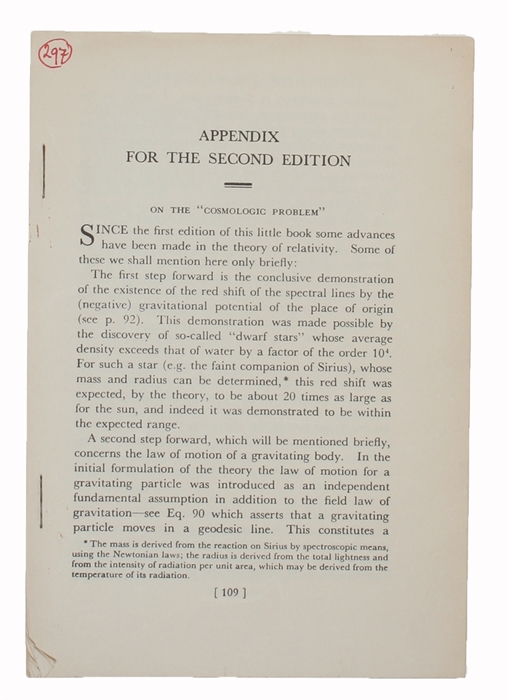 APPENDIX FOR THE SECOND EDITION [of The Meaning of Relativity] + APPENDIX II. GENERALIZED THEORY OF GRAVITATION.

[1950]. 8vo. Original proof-copy (of the latest stage, presumably final proof, in the same format as the printed version and with no corrections), printed on rectos and versos. Stapled twice in left margin. A few marginal creases. A (proof-) number to upper left corner in red ink (297). Pp. 109-148 + tipped-in errata slip at p. 147.

Very rare original proof-copy of the two highly important appendices for Einstein's "The Meaning of Relativity", third edition, 1950, the second appendix being one of the most important pieces Einstein ever wrote, namely the appendix "in which he described his most recent work on unification" (Pais), and the work which was hailed by The New York Times under the heading "New Einstein theory gives a master key to the universe". The first appendix, which appeared for the second edition of the work, remained unchanged throughout the history of "the Meaning of Relativity" and was written because "Since the first edition of this little book some advances have been made in the theory of relativity. [...] The first step forward is the conclusive demonstration of the existence of the red shift of the spectral lines by the (negative) gravitational potential of the place of origin" [...] A second step forward, which will be mentioned briefly, concerns the law of motion of a gravitating body." [...] A third step forward, concerning the so-called "cosmologic problem," wiil be considered here in detail..." (pp. 109-10).

The present 40 pages constitute the final proof-copy of the entire appendices I and II to the Generalized Theory of Gravitation, exactly as they appeared in the third edition (Princeton in 1950).

Einstein's "The Meaning of Relativity" was originally published in 1922, on the basis of his "Vier Vorlesungen ueber Relativitetstheorie" given at Princeton in 1921. A second edition, with an appendix (appendix I) appeared in 1945 (several issues and editions of this appeared also), and in 1949 the third edition, with the seminal Appendix II printed for the first time, appears (also appeared in 1950, in Princeton). In 1950 a revised edition of the third edition appears, having Appendix II slightly revised, and in 1953 the heavily revised fourth edition appears. THIS IS THE PROOF-COPY OF APPENDICES I AND II FOR THE "THIRD EDITION, INCLUDING THE GENERALIZED THEORY OF GRAVITATION" (PRINCETON, 1950).

The main focus of the work throughout all these editions of the work since 1949 is Appendix II, which deals with Einstein's main interest, the generalization of the Gravitation Theory, which was to unite the general theory of relativity with electromagnetism, recovering an approximation for quantum theory, and presenting us with a theory to explain the universe as a unified entity, the ultimate goal for the greatest physicist that ever lived. "This was Einstein's ultimate response to the mechanical-electromagnetic crisis in physical theory he had first talked about in the opening of his 1905 light quantum-paper." (Nandor, in D.S.B., p. 330). It was indeed Einstein's aim to provide an explanation of the universe through his unified field theory, although he was well aware that his sort of field theory might not exist. However, even the establishing of the non-existence of it could bring us closer to an explanation than we had ever been before. There is no topic of greater importance to Einstein than his theory of unification.

"In 1949 Einstein wrote a new appendix for the third edition of his "The Meaning of Relativity" in which he described his most recent work on unification. It was none of his doing that a page of his manuscript appeared on the front page of "The New York Times" under the heading "New Einstein theory gives a master key to the universe". He refused to see reporters and asked Helen Dukas to relay this message to them: "Come back and see me in twenty years"." (Pais, p. 350).