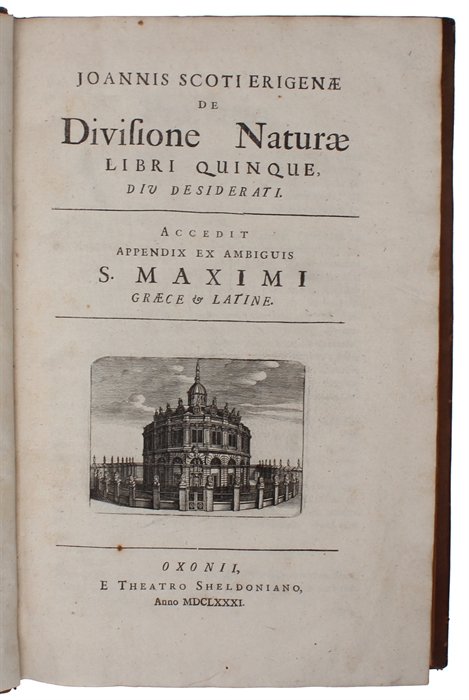 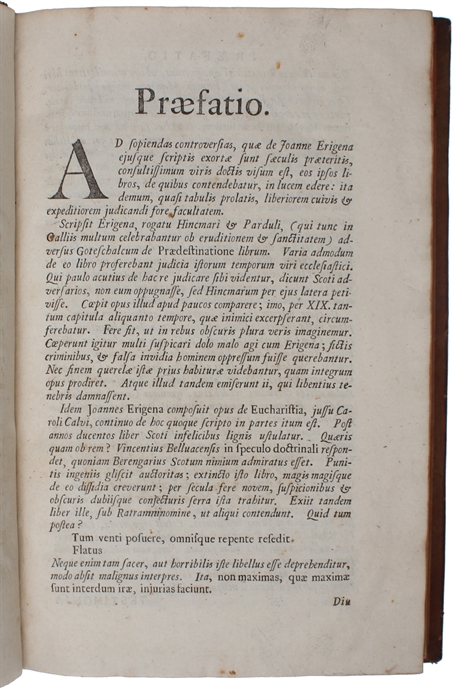 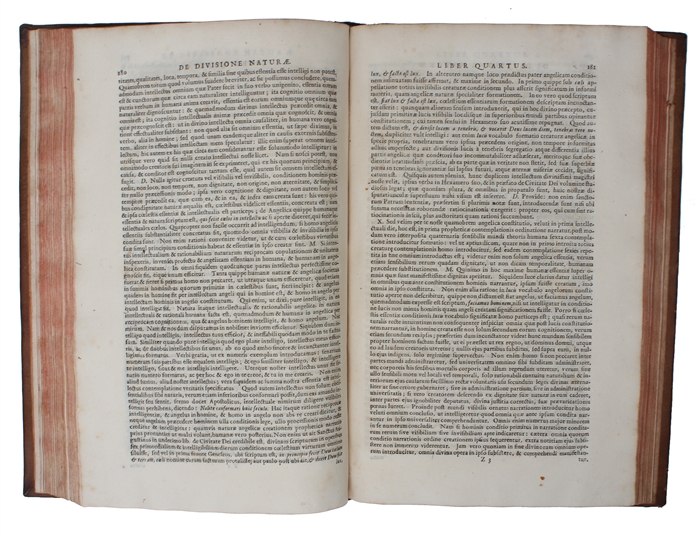 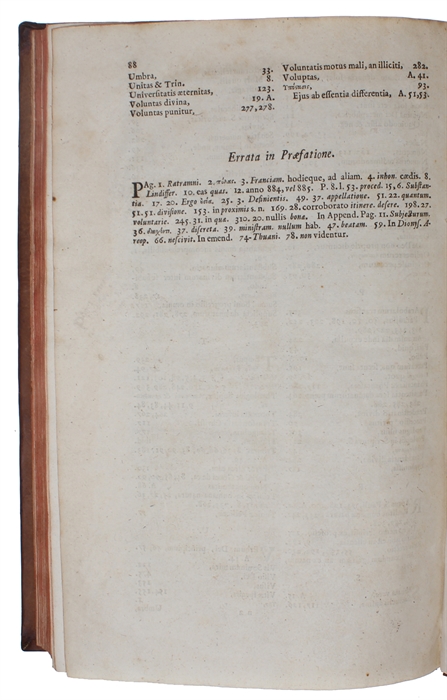 Folio. Nice contemporary full calf with five raised bands and single gilt line-decorations to spine. Gilt title-label and gilt lettering to spine. Double blindstamped borders to boards. All edges of boards gilt. A bit of wear to hinges and capitals, but overall very nice. Internally very clean and fresh with only minimal, light occasional browning. With the book-plate of Gaddesden Library to inside of front board. Engraved device to title-page. (14), 312; (4), 88 pp.

Rare first edition of the founding work of Western medieval philosophy, the main work by "the one important philosophical thinker to appear in Latin Christendom between Augustine... and Anselm." (Encycl. of Phil.). This magnum opus of medieval thought is considered the "final achievement" of ancient philosophy (Burch: Early Medieval Philosophy, 1951) and is one of the few true defining moments of medieval philosophy. It not only marks the beginning of Western medieval philosophy, it also anticipates German idealism. Kolakowski identifies "De divisione naturae" as the archetype of Hegel's Phenomenology of Mind (see "Main Currents of Marxism"), the Hegelians considered him the father of German idealism, and Hegel states that "Scholastic philosophy is considered to begin with John Scotus Erigena who flourished about the year 860, and who must not be confused with the Duns Scotus of a later date... With him true philosophy first begins, and his philosophy in the main coincides with the idealism of the Neo-Platonists." (From Hegel’s Lectures on the History of Philosophy: Part Two. Philosophy of the Middle Ages).  As the dialectical reasoning in the “De divisione naturae” prefigures Hegel, its theory of place and time as defining structures of the mind anticipates Kant.

As Gordon A. Leff also points out, Eriugena stands out as the one original thinker in the period from Boethius to Anselm. He is responsible for a revival of philosophical thought which had remained largely dormant in Western Europe after the death of Boethius and creates the only philosophical system to emerge in more than half a millenia. He is the forerunner to speculative idealism, considered a “Proclus of the West” (Hauréau, 1872) and the “Father of Speculative Philosophy” (Huber, 1861).

According to The Stanford Encyclopaedia of Philosophy, Eriugena is "the most significant Irish intellectual of the early monastic period. He is generally recognized to be both the outstanding philosopher (in terms of originality) of the Carolingian era and of the whole period of Latin philosophy stretching from Boethius to Anselm"; Gersh praises his notion of structure, which places him amongst modern writers rather than medieval ones, stating also that "(i)n some respects, Western medieval philosophy can be viewed as beginning with the brilliant and controversial ninth-century thinker JohnScotus Eriugena." (Gersh, p. 125). His magnum opus "synthesizes the philosophical accomplishments of fifteen centuries and appears as the final achievement of ancient philosophy" (Burch).

Eriugena became extremely influential throughout the later Middle Ages and directly influenced Bernard of Clairvaux, Hildegard van Bingen, and Nicolas of Cusa. He also anticipates Thomas Aquinas in saying that one cannot know and believe a thing at the same time, and exercised a direct influence on modern philosophy. After the rediscovery of his magnum opus, which was printed for the first time in 1681 (the present work), his astonishingly modern train of thought and his immensely important philosophical system came to directly influence some of the most important thinkers of the modern era, most significantly probably Hegel.

Eriugena is often referred to as “the Hegel of the 9th century”, and he thus also became a primary influence upon Marx’ dialectical form. Schopenhauer stresses the importance of the rediscovery of Eriugena with the present publication and says in Parerga and Paralopomena (vol. I) “ After Scotus Erigena had been lost and forgotten for many centuries, he was again discovered at Oxford and in 1681, thus four years after Spinoza's death, his work first saw the light in print. This seems to prove that the insight of individuals cannot make itself felt so long as the spirit of the age is not ripe to receive it.”

“In the later Middle Ages both Meister Eckhart of Hochheim (c.1260–c.1328) and Nicholas of Cusa (1401–64) were sympathetic to Eriugena and familiar with his “Periphyseon”. Cusanus owned a copy of the “Periphyseon”. Interest in Eriugena was revived by Thomas Gale’s first printed edition of 1687 (recte: 1681). However, soon afterwards, Thomas Gale’s first printed edition, the “Periphyseon”, was listed in the first edition of the “Index Librorum Prohibitorum”, and remained on it, until the Index itself was abolished in the 1960s. In the nineteenth century, Hegel and his followers, interested in the history of philosophy from a systematic point of view, read Eriugena rather uncritically as an absolute idealist and as the father of German idealism. The first critical editions of his major works were not produced until the twentieth century (Lutz, Jeauneau, Barbet)

Eriugena is an original philosopher who articulates the relation between God and creation in a manner which preserves both divine transcendence and omnipresence. His theory of human nature is rationalist and intellectualist but also apophatic. His theory of place and time as defining structures of the mind anticipates Kant, his dialectical reasoning prefigures Hegel. But above all, Eriugena is a mystic who emphasizes the ultimate unity of human nature and through it of the entire creation with God.” (SEP).

Eriugena - who Bertrand Russel also considered "the most astonishing person of the ninth century" - had been commissioned by Charles the Bald to translate the writings that were then thought to be by Dionysius (the learned pagan converted by St. Paul). Eriugena had taught himself Greek and succeeded in an excellent translation. "He went on to translate various other Greek Christian texts, by Gregory of Nyssa and the seventeenth-century Maximus the Confessor. All these influences along with his wide reading of the Latin fathers (especially Ambrose and Augustine) and his enthusiasm for logic.. are combined in his masterpiece "Periphyseon ("About Nature"; it is also sometimes known as "De divisione naturae", "On the division of nature"), written in the 860s. The "Periphyseon" has been seen by some as continuing a tradition of Greek Neoplatonic thought, and by some as anticipating nineteenth-century German Idealist philosophy". (Stephen Gersh, Johannes Scotus Eriugena and Anselm of Canterbury, p. 121. In: Marenbon, Medieval Philosophy, 2004).

Although the beautiful Oxford-imprints from the second half of the seventeenth century are usually not rare in themselves, the present work is very scarce indeed. A reason for this might be that the book was placed on the “Index Librorum Prohibitorum” right after publication and remained on it, until the Index itself was abolished in the 1960s.

This editio princeps of Eriugena’s main work also contains Eriugena’s translation of one of the works that influenced him the most, namely the “Scholia Maximi in Gregorium Theologium”, which also appears here in print for the first time.

Johannes (c.800–c.877), who signed himself as “Eriugena” in one manuscript, and who was referred to by his contemporaries as “the Irishman” (scottus—in the ninth century Ireland was referred to as “Scotia Maior” and its inhabitants as “scotti”) is the most significant Irish intellectual of the early monastic period. He is generally recognized to be both the most outstanding philosopher (in terms of originality) of the Carolingian era and of the whole period of Latin philosophy stretching from Boethius to Anselm…

Eriugena’s uniqueness lies in the fact that, quite remarkably for a scholar in Western Europe in the Carolingian era, he had considerable familiarity with the Greek language, affording him access to the Greek Christian theological tradition, from the Cappadocians to Gregory of Nyssa, hitherto almost entirely unknown in the Latin West…

Eriugena’s thought is best understood as a sustained attempt to create a consistent, systematic, Christian Neoplatonism from diverse but primarily Christian sources. Eriugena had a unique gift for identifying the underlying intellectual framework, broadly Neoplatonic but also deeply Christian, assumed by the writers of the Christian East…

Overall, Eriugena develops a Neoplatonic cosmology according to which the infinite, transcendent, and “unknown” God, who is beyond being and non-being, through a process of self-articulation, procession, or “self-creation”, proceeds from his divine “darkness” or “non-being” into the light of being, speaking the Word who is understood as Christ, and at the same timeless moment bringing forth the Primary Causes of all creation. These causes in turn proceed into their Created Effects and as such are creatures entirely dependent on, and will ultimately return to, their sources, which are the Causes or Ideas in God. These Causes, considered as diverse and infinite in themselves, are actually one single principle in the divine One. The whole of reality or nature, is involved in a dynamic process of outgoing (exitus) from and return (reditus) to the One. God is the One or the Good or the highest principle, which transcends all, and which therefore may be said to be “the non-being that transcends being”. In an original departure from traditional Neoplatonism, in his dialogue Periphyseon, this first and highest cosmic principle is called “nature” (natura) and is said to include both God and creation.

Nature is defined as universitas rerum, the “totality of all things”, and includes both the things which are (ea quae sunt) as well as those which are not (ea quae non sunt). This divine nature may be divided into a set of four “species” or “divisions” (divisiones) which nevertheless retain their unity with their source. These four divisions of nature taken together are to be understood as God, presented as the “Beginning, Middle, and End of all things”.” (SEP).