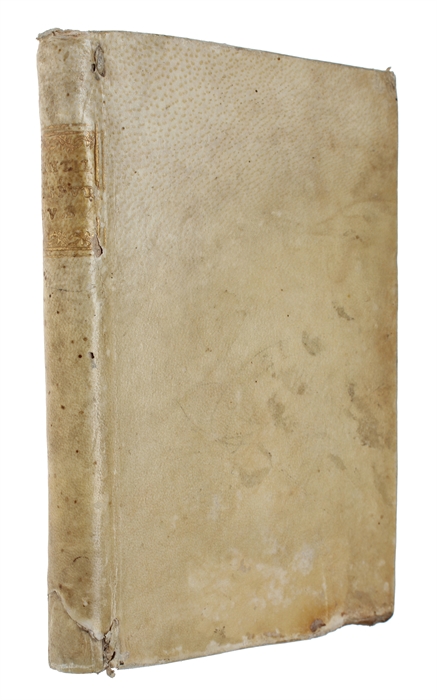 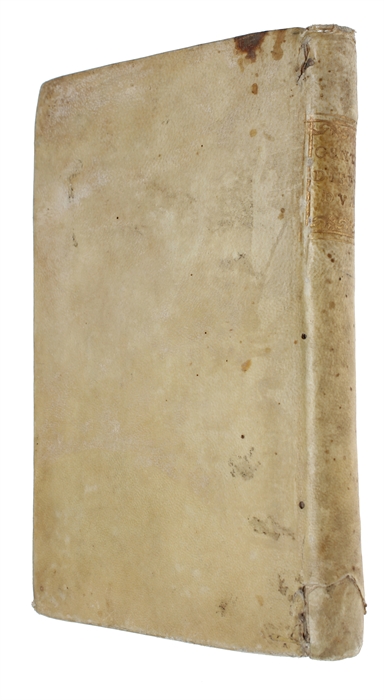 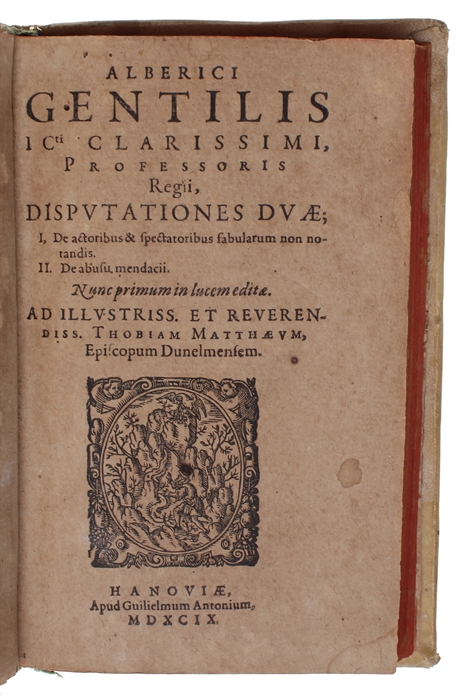 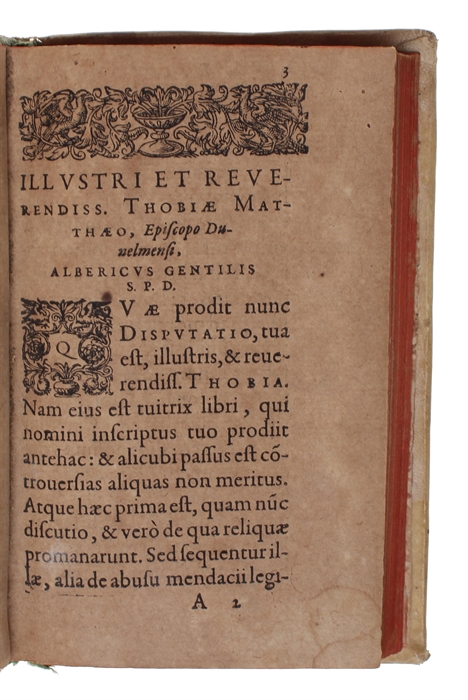 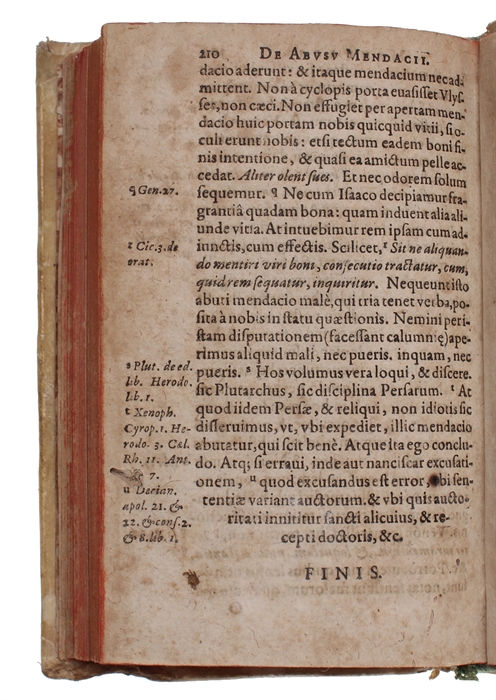 "LET THE SAFETY OF THE PEOPLE BE THE SUPREME LAW"

Extremely scarce first edition of Genitili's highly important "Two Disputations", including the first printing of his seminal treatise "On Lying", which is of fundamental importance to Gentili's legal system that was based on practice and experience and became extremely influential.

"In his disputation on lying, published in 1599, he defended the use of the "officious lie" in cases of "great necessity", and insisted that the law should be considered in the light of its ultimate aim, citing the maxim, "Salus populi suprema lex esto" (Let the safety of the people be the supreme law)." (Note: Gentili, Disputationum Duae… 1599). (Kingsbury & Straumann, The Roman Foundations of the Law of Nations. Alberico Gentili and the Justice of Empire, p. 142).

Alberico Gentili, the "Father of international law" (1552 -1608), was an Italian jurist, tutor of Queen Elizabeth I, and a standing advocate to the Spanish Embassy in London, who served as the Regius professor of civil law at the University of Oxford for 21 years. He was the earliest writer on public international law, and in 1587, he became the first non-English person to be a Regius Professor.
Gentili's books are recognized to be among the most essential for international legal doctrines.

"A prominent early modern Italian legal theorist and practicing lawyer, Alberico Gentili is regarded, along with Francisco de Vitoria and Hugo Grotius, as one of the founders of the science of the modern law of nations (ius gentium) and a major figure in the development of international relations. He designed a solid and autonomous framework for the law of nations based on three pillars: the Greco-Roman idea of natural law, the Justinian compilation of Roman law, and the-then novel Bodinian notion of sovereignty as supreme, perpetual, and indivisible power.
Gentili freed the law of nations from excessive scholastic influences and theological importations, avoiding metaphysical developments and overly subtle dialectics. He tried to build a system based on practice and experience. His legal construction is more inductive from events, episodes, customs, and facts, than deductive from unchanged premises. Providing some new arguments, he removed religion as a valid reason for conflict and war, he advocated for the legitimacy of non-Christian regimes, especially the Ottomans, and he tried to fix the tenuous lines of separation between jurisprudence and theology and between the internal forum and external forum of canon law. Neither the pope nor the Roman Catholic Church has a place in Gentili's systematic account. His world-famous saying - silete theologi in munere alieno! - commands the theologian not to be involved in other people's business and was claimed centuries later by the jurisprudence of European public law to argue in favor of the secularization of the law, beyond the limits Gentili himself intended." (Domingo & Minucci, Alberigo Gentili and the Secularization of the Law of Nations, p. 1).

Alberico Gentili was a transitional, erudite, legal thinker and practicing lawyer fully involved in the events of his lifetime and attentive to continuous and profound political and social changes. Educated in the Bartolist method, he gradually evolved to a more integrated jurisprudence, in accordance with the humanist approach. He elaborated a new framework for the law of nations as a part of the law of nature to be applied between and among sovereign states and governed by Justinian Roman law. He also offered a systematic account of two of the most relevant institutions of international relations: diplomacy and war. Gentili's severe critique of religious intolerance; his drawing of a demarcation between the spiritual and the temporal, the internal and the external forum of conscience; his separation of functions between theologians and jurists; his continuous interpretative effort to find principles of natural law-all of these ideas and attitudes, among others, contributed to the establishment of the theoretical basis of the European modern state and to the building up of an international society of sovereign nations. (Domingo & Minucci, Alberigo Gentili and the Secularization of the Law of Nations, p. 17).

First editions by Gentili are exceedingly rare on the market.