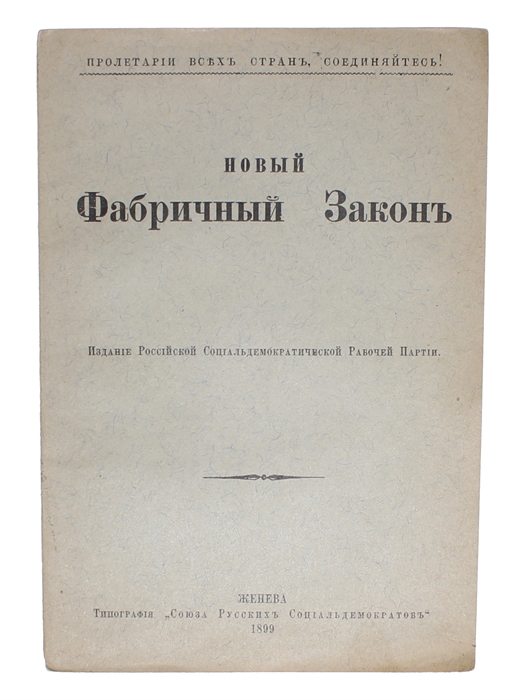 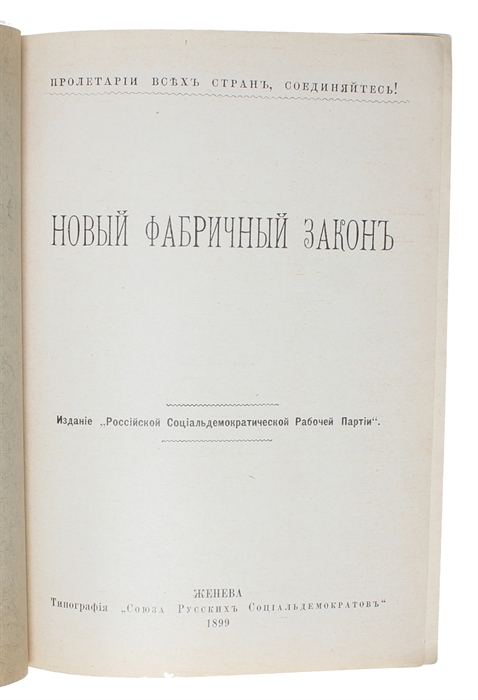 THE TURNING POINT FOR THE MARXIST MOVEMENT IN RUSSIA

Small8vo. In the original printed wrappers. A very fine and clean copy. (1)-52 pp.

Scarce first appearance of Lenin's important and influential analysis and commentary on the New Factory law of June 2nd 1897. Written by Lenin in Exile in 1897 and published two years later in Geneva, the present pamphlet marks the turning point for the Marxist movement in Russia: "The Marxist underground had won a remarkable moral victory [In lowering the working hours to eleven and half hour per day]. What had hitherto appeared as a harmless, even anachronistic doctrine in such a backward country as Russia, was now seen as a threat of intimidating dimensions." (Akimov, on the Dilemmas of Russian Marxism 1895-1903).

"Despite continuous repression, which landed many experienced revolutionaries in exile, the movement helped provoke and organize massive strikes in St. Petersburg in 1896 and 1897, leading many manufacturers unilaterally to shorten the regular workday in their factories to eleven and a-half hour. The government extended this concession to the whole country in a law of 2 june 1897. Henceforth, however, the government would deal with strike instigators largely by administrative means, not in the regular courts. The Police Department would also pay far more attention to the labor movement" (Lieven, The Cambridge History of Russia, Vol. 2).

The fact that the autocracy had been seen to capitulate to the demands of a section of the Russian people was something almost unique in Russian history. This lesson was not lost upon Lenin and in the present work Lenin pointed out repeatedly that it was only due to the determined initiative of the St. Peterburg workers that legal concession for all workers was secured: "It was only by struggle, by a conscious and staunch struggle, that the workers secured passage of this law. Only by struggle will they be able to secure the actual enforcement of the law and its enforcement in the interests of the workers. Without a stubborn struggle, without a staunch resistance of the united workers to every claim the employers make, the new law will remain a scrap of paper" (From the present publication).

A major theme of Lenin's writings prior to 1905 was concerned with factory legislation, the present publication by far being the most important.