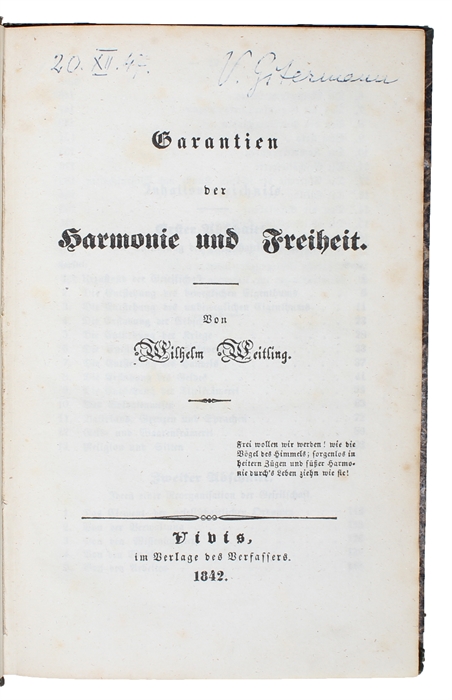 THE FIRST REAL BIBLE OF COMMUNISM

Rare first edition of one of the greatest works of communism, Weitling's extremely influential main work, which came to be known as "the debut of the German workers" (Marx). Published a full six years before "The Communist Manifesto", Weitling's "Guarantees of Harmony and Freedom" arguably constitutes the foundational work of Communism, and it is not by chance that Engels names Weitling "The founder of German Communism" (Engels 1975 [1843], p. 402) and Marx characterizes this work as the "brilliant debut of the German workers" and the "gigantic first steps of the proletariat".

Considered the first real Communist, Weitling was a communist before both Marx and Engels. He was the founder of the League of the Just (Bund der Gerechten - really the first international communist organisation with branches in Germany, France, Switzerland, Hungary and Scandinavia) that Marx and Engels joined and turned into the Communist League and signatory to early statements by the executive of the First International.
Having been so admired by Marx and Engels after the publication of the present magnum opus, he later fell out with them after a struggle in 1846-47, over the party programme for the League of the Just, which he had co-founded. Marx, of course, won the struggle, and the Communist Manifesto as written - not a party programme dictating direct and violent overthrow of the state and the immediate establishment of communism.

Other members of the League of the Just fled to Switzerland, the most influential among them being Wilhelm Weitling (1809-1864). A tailor by trade, one of the first German revolutionists from among the artisan proletariat, Weitling, like many other German artisans of the time, peregrinated from town to town. In 1835 he found himself in Paris, but it was in 1837 that he settled there for long. In Paris he became a member of the League of the Just and familiarized himself with the teachings of Hugues Lamennais, the protagonist of Christian socialism, of Saint-Simon and Fourier. There he also met Blanqui and his followers...

In Switzerland Weitling and some friends, after an unsuccessful attempt to propagandise the Swiss, began to organise circles among the German workers and the emigrants. In 1842 he published his chief work, "Guarantees of Harmony and Freedom"...

Influenced by Blanqui, Weitling's ideas differed from those of other contemporary utopians, in that he did not believe in a peaceful transition into communism. The new society, a very detailed plan of which was worked out by him, could only be realised through the use of force. The sooner existing society is abolished, the sooner will the people be freed. The best method is to bring the existing social disorder to the last extreme. The worse, the better! The most trustworthy revolutionary element which could be relied upon to wreck present society was, according to Weitling, the lowest grade proletariat, the "lumpenproletariat", including even the robbers.

It was in Switzerland, too, that Michael Bakunin (1811-1876) met Weitling and absorbed some of his ideas. Owing to the arrest and the judicial prosecution started against Weitling and his followers, Bakunin was compromised and forever became an exile from his own country.

After a term in prison, Weitling was extradited to Germany in 1841. Following a period of wandering, he finally landed in London where his arrival was joyously celebrated.

A large mass meeting was arranged in his honour. English socialists and Chartists as well as German and French emigrants participated. This was the first great international meeting in London. It suggested to Schapper the idea of organising, in October, 1844, an international society, The Society of Democratic Friends of all Nations. The aim was the rapprochement of the revolutionists of all nationalities, the strengthening of a feeling of brotherhood among peoples, and the conquest of social and political rights At the head of this enterprise were Schapper and his friends.

Weitling stayed in London for about a year and a half. In the labour circles, where all kinds of topics dealing with current events were being passionately discussed, Weitling had at first exerted a great influence. But he soon came upon strong opposition. His old comrades, Schapper, Heinrich Bauer and Joseph Moll (1811-1819), had during their much longer stay in London, learned all about the English labour movement and the teachings of Owen.
According to Weitling the proletariat was not a separate class with distinct class interests; the proletariat was only a portion of the indigent oppressed section of the population. Among these poor, the "Iumpenproletariat" was the most revolutionary element. He was still trumpeting his idea that robbers and bandits were the most reliable elements in the war against the existing order. He did not attach much weight to propaganda. He visualised the future in the form of a communist society directed by a small group of wise men. To attract the masses, he deemed it indispensable to resort to the aid of religion. He made Christ the forerunner of communism, picturing communism as Christianity minus its later accretions.
...
In 1844 Weitling was one of the most popular and renowned men, not only among German workers but also among the German intelligentsia...

To him [i.e. Marx] Weitling was a very gifted expression of the aspirations of that very proletariat, the historic mission of which he himself was then formulating. Here is what he wrote of Weitling before he met him:

"Where can the bourgeoisie, its philosophers and literati included, boast of work dealing with the political emancipation, comparable with Weitling's "Guarantees of Harmony and Freedom"? If one compares the dry and timid mediocrity of German political literature with this fiery and brilliant debut of the German workers, if one compares these halting but gigantic first steps of the proletariat with the mincing gait of the full-grown German bourgeoisie, one cannot help predicting that the proletarian Cinderella will develop into a prodigy of strength."

It was quite natural that Marx and Engels should seek to make the acquaintance of Weitling. We know that the two friends during their short sojourn in London in 1845, became acquainted with the English Chartists and with the German emigrants. Though Weitling was still in London at that time, we are not certain that Marx and Engels met him. They entered into close relations in 1846, when Weitling came to Brussels where Marx, too, had settled in 1845 after he had been driven out of France.

As Weitling kept arguing for a direct and violent overthrow of the state and the immediate establishment of communism based on the model of the first Christians in the New Testament, Marx came to directly disagree with him, arguing that what was needed first was the full development of capitalism and bourgeois democracy, before communism could take root. By June of 1847, the newly named Communist League endorsed Marx's programme, not Weitling's revolutionary ideas, and a year later, "The Manifesto of the Communist Party". By that, time Weitling had immigrated to the USA.