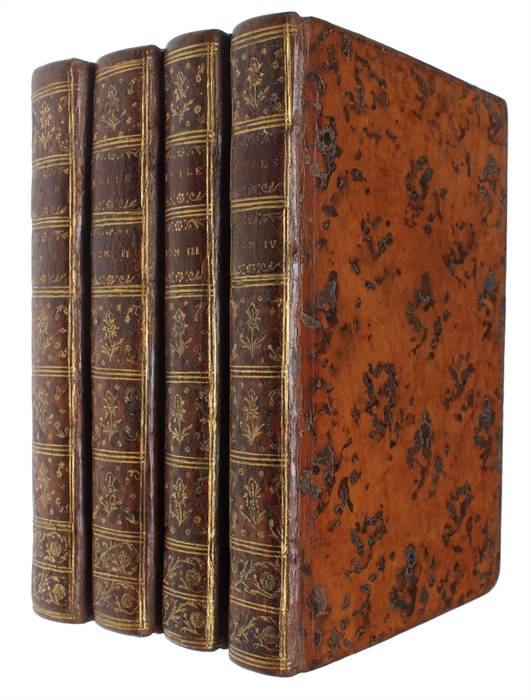 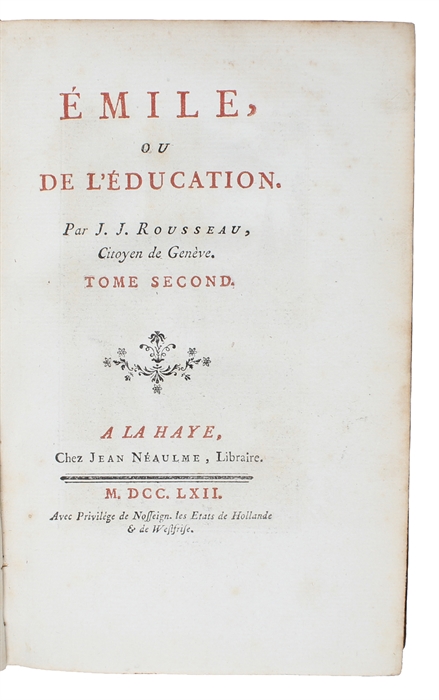 THE EDUCATION OF MAN

The very scarce actual first edition, being the rarer, more sought-after, nicer 8vo-edition (as opposed to the much more common 12mo edition, which was printed about simultaneously, but which seems to have appeared later), the 8vo format also being the one preferred by Rousseau himself and the format in which he wanted his great work to appear.

This magnificent work constitutes the climax of Rousseau's genius as well as the most important work on education since Plato. In Émile, Rousseau poses an entirely new approach to education and the upbringing of children. His thoughts were exceedingly controversial, the work was burnt by the executioner immediately after its first appearance and Rousseau had to flee the country due to a warrant for his arrest.

The printing history of "Émile" is extremely complicated and has been a matter of intense dispute for many decades. Until Maceachern's bibliography from 1989, the edition that has now been established as the "Second Paris octavo" (MacEachern 4A) was generally considered the first printing of the work, but there is no longer any dispute about the fact that the present edition is in fact the actual first (1A). The first edition appeared in both 8vo(1A) and 12mo(1B), and it seems to be generally accepted that the 8vo-edition was distributed first, but that parts of the 12mo-edition may have been in printing a bit earlier. Rousseau himself seems to have preferred the 8vo-edition and wished for his great work to appear as this form first ("The question of the format gave rise to some dissension, for while Rousseau felt that the work was more suited to the octavo format, Duchesne preferred to print a duodecimo and only a limited number of the more expensive octavo. Rousseau finally agreed to Duchesne's plan with reluctance, declaring that in his opinion Duchesne was committing an error of judgment and that the octavo would certainly be the more sought after of the two formats." - MacEachern, pp. 18-19).

Rousseau himself was more involved in the coming-to-be of "Émile" than perhaps any other author has been in any other book. Throughout the entire process there were a large number of misunderstandings between himself and Duchene which more than once endangered the printing and publishing of this seminal work, and which has contributed greatly to the extremely complicated bibliographical data of it. In fact, up until very late in the process, Rousseau did not believe that the work was actually going to be finished and it took several instances of mediation between the two to keep the work on tracks. Finally, however, the work was a reality, and with it one of the greatest works of Western culture had been born.

Rousseau's "Émile" constitutes the most significant modern treatise on the education of man, surpassed only by Plato's "Republic". The comparison with Plato is all the more apt, seeing that both works grow out of and are meant to remedy lacunae in the political philosophy of their authors.

The conclusion to Rousseau's work on the social contract, also written during Rousseau's stay in Montmorency, had pointed to a predicament of political thought: that only if man were himself naturally inclined to freedom, could he make use of political freedom. "Émile" is the analysis of the conditions, under which a child can develop into a free human being. As such, it presents the conclusion to Rousseau's earlier works on inequality, political freedom and servitude.

The paradox of Émile is that, while the development of human nature must be natural, if the child is to develop into a free human being, steering that development in the right - that is, free - direction requires constant intervention which, moreover, must be hidden from the child. Rousseau details this intervention in his analysis of the five stages in the education of the child, covering the period from birth to the age of 25.

Being one of the most influential thinkers of the 18th century, Rousseau is considered one of the indirect causes of the French Revolution. In Rousseau one certainly finds one of the most influential spokesmen for 18th century thought, and it is primarily the thoughts of him and Voltaire that are put into action with the Revolution."The first and last of these (i.e. Héloise and Émile), with their sentimental expression of deism, gave much offence, and Rousseau, like Voltaire, was forced to flee to Prussia. Restless and locally unpopular, he fled again to England, where he had a great welcome. Hume, who had offered him asylum, looked after him patiently..." (PMM 207, Printing and the Mind of Man).

The totalitarian tendency of Rousseau's philosophy of education has been noted by a number of philosophers, in recent times most famously, Karl Popper.