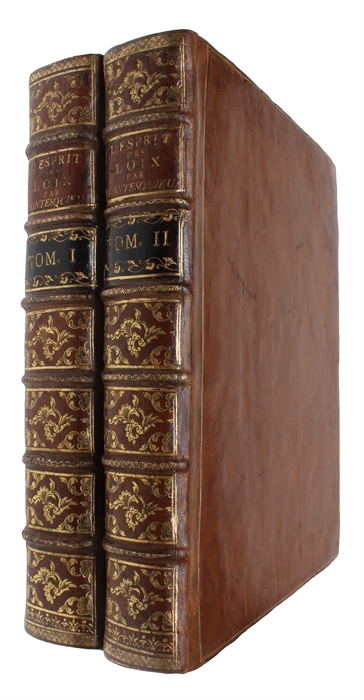 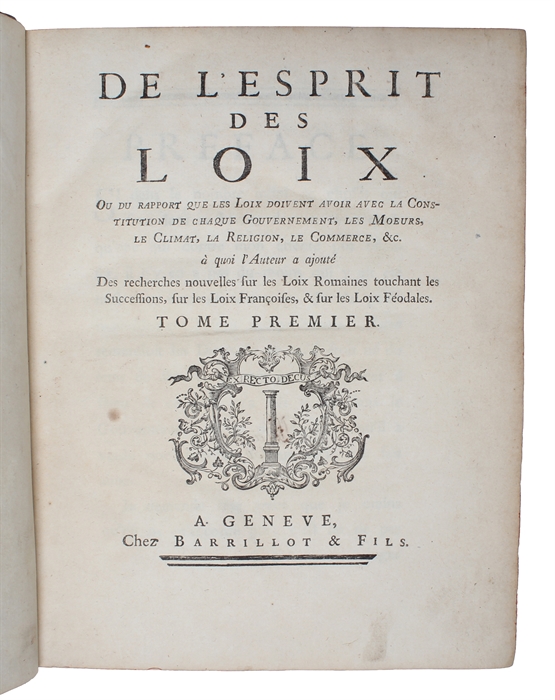 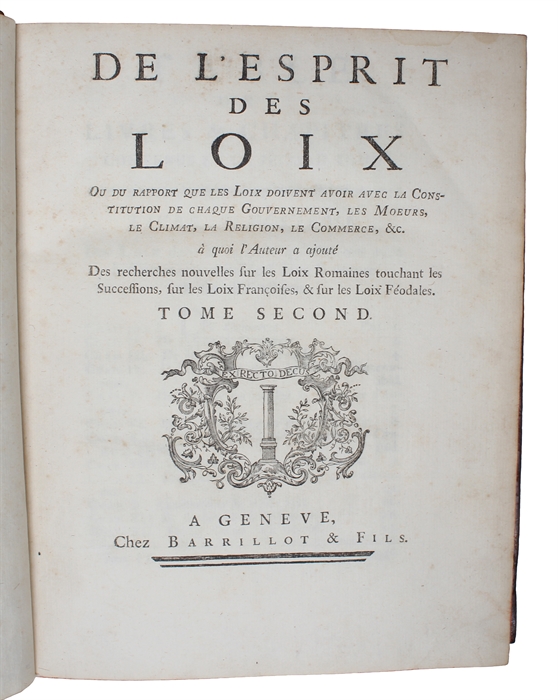 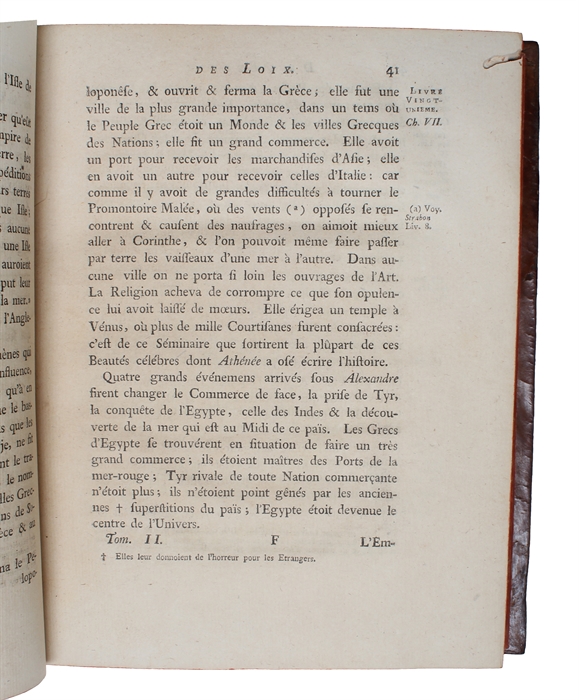 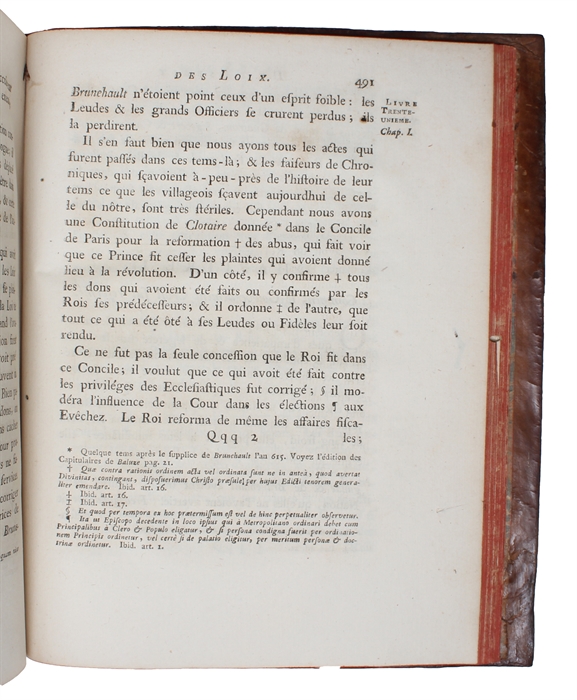 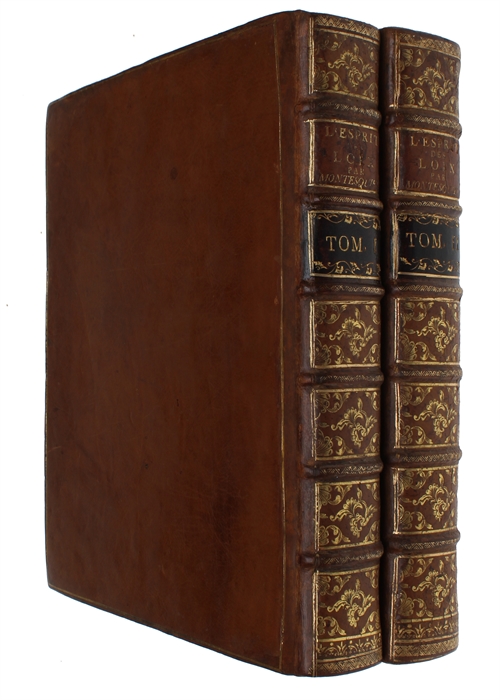 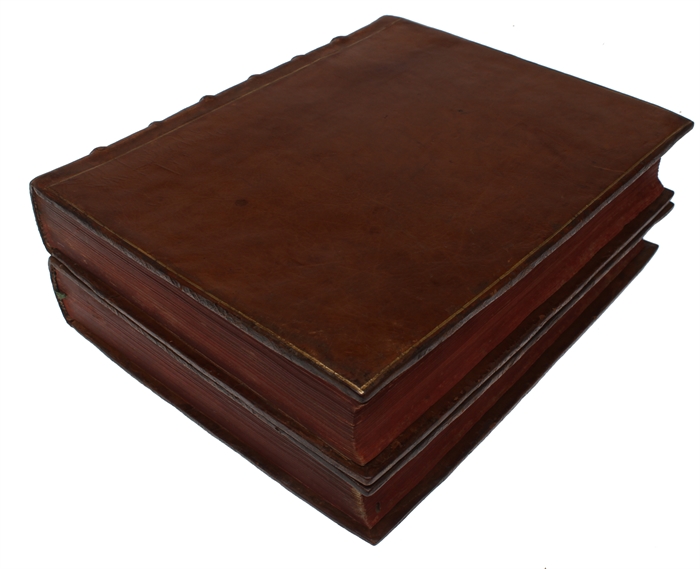 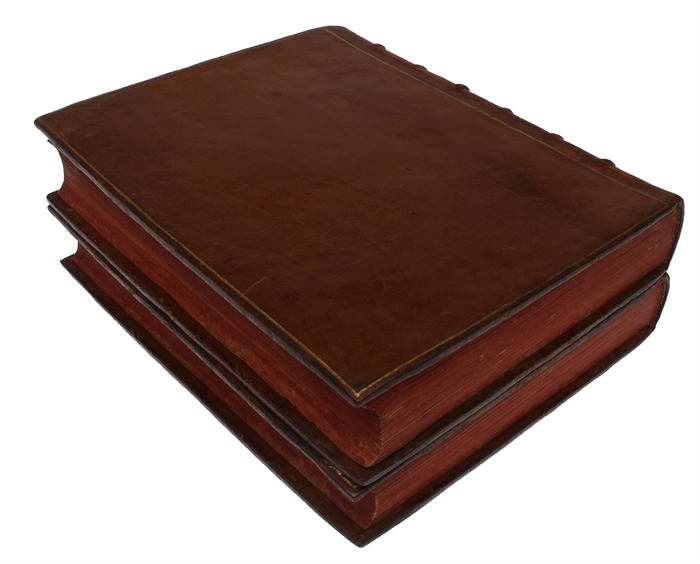 4to. Two lovely contemporary uniform full calf bindings with richly gilt spines, gilt title- and tome-labels and single gilt line-borders to boards. Edges of boards blindtooled. Very neatly restored at hinges and corners, barely noticeable. 19th century book-plate ("FAMA") to inside if front boards. Old handwritten notes in ink to front free end-papers. Some leaves evenly browned, as usual. Vol. I with contemporary owner's inscription "B. Heiman/ 1756/ S. st." to verso of title-page. Light inkspotting to half-title and occasional light brownspotting. Vol. II with very small owner's name to verso of front free end-paper: "Mr. Gustavo Horta" and with a worm tract. The worm tract is mostly very small and only in the very top corner of the upper blank margin or as a tiny hole in the inner blank margin towards the hinge. From pp. 493 to 544, the worm tract is larger, but still situated in the blank margin (outer) and far from affecting text at any point. With both half-titles, preface (vol. 1), and tables of contents. No errata at the end of volume one, and no folded map. Woodcut printer's devices to title-pages. (8), XXIV, 522; (4), XVI, 564 pp.

The very rare first edition, first issue of Montesquieu's seminal main work, "[i]n many ways one of the most remarkable works of the eighteenth century" (PMM 197), in which the author presents his theory of constitutional monarchy, advocating constitutionalism and the separation of powers, and explains human laws and social institutions.

The very first printing, i.e. the first edition, first issue, of the present work is of the utmost scarcity. Numerous editions and issues of the work were printed in the months following the first appearance. The present copy has the first issue pointers (the two "r"s in "Barrillot" on the title-page, no errata). It does not have a folding map, as mentioned by Brunet, but whether this is actually supposed to be present or not in the first printing, has not been established - some bibliographers say that it should not be there.

Montesquieu began writing this his magnum opus in 1743, by the end of which year he had almost finished the first draft of it. The same year he began the first of two great revisions of it, which he finished in 1746. In 1747 he finished his second revision, adding several new chapters, and chose J. Barrillot from Geneva to publish the work, which finally appeared for the first time in November 1748, in two quarto volumes, with no mention of author or year. Numerous editions and issues appeared the following months and years, and by 1751 22 editions of the work had appeared. Already in 1750 the work was published in English, the English editions amounting to 10 by 1773, and by 1801 the work had appeared in both German (1789), Dutch, Danish, Polish, Italian, and Russian (1801). The work exercised the greatest of influence, both negative and positive, and numerous anti-Montesquieu-pamphlets and articles appeared during the last half of the 18th century. Because of the work, Montesquieu was also attacked by the Sorbonne, as well as in the general assembly of the French clergy, and in Rome. In 1751 the work was placed on the Index.

As the number of editions, translations etc. bears witness to, the work provided the greatest of impact on 18th century political thought as well as actual politics and law. In fact, few other works can be claimed to possess the same power of influence as this one, directly affecting the likes of Tocqueville and Catherine the Great. Although Montesquieu had to defend himself against great thinkers like Voltaire, "his theories underlay the thinking which led up to the American and French revolutions, and the United States Constitution in particular is a lasting tribute to the principles he advocated." (PMM 197).

"Montesquieu was one of the great political philosophers of the Enlightenment. Insatiably curious and mordantly funny, he constructed a naturalistic account of the various forms of government, and of the causes that made them what they were and that advanced or constrained their development. He used this account to explain how governments might be preserved from corruption. He saw despotism, in particular, as a standing danger for any government not already despotic, and argued that it could best be prevented by a system in which different bodies exercised legislative, executive, and judicial power, and in which all those bodies were bound by the rule of law. This theory of the separation of powers had an enormous impact on liberal political theory, and on the framers of the constitution of the United States of America." (SEP).