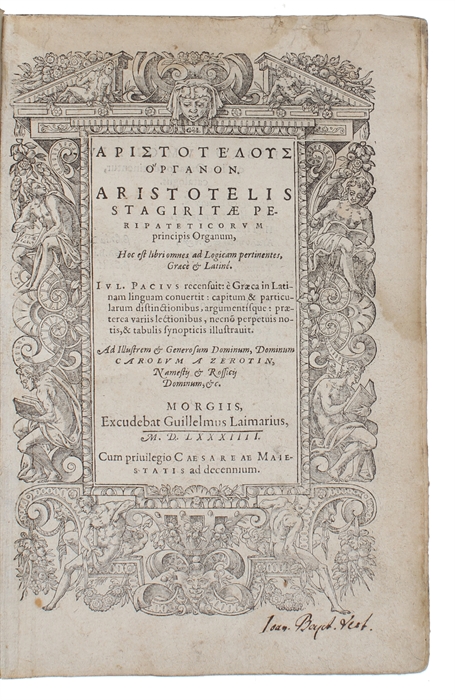 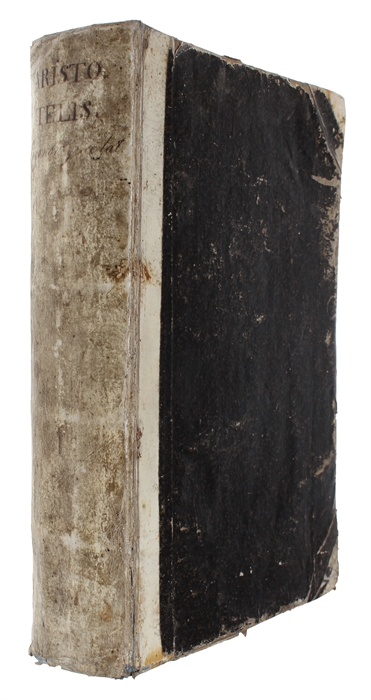 THE STANDARD INTERPRETATION OF ARISTOTLE'S "ORGANON"

Small folio. 18th century half vellum, somewhat soiled and worn. Corners and edges bumped and worn. Handwritten title to spine. Fore-edge with 2-line title in neat (contemporary?) hand and with the "Societas Jesu" (i.e. the Jesuit Society) symbol in white to the otherwise red fore-edge. Internally a very ni8ce copy, with the occasional browning and spotting. A faint damp stain to top marging of some leaves. A small hole to top of title-page, far from affecting print. Last leaves with neat strenthening of blank upper corners, far from affecting text. Old (presumably 18th century) owner's name to title page: "Ioan. Bey A. Vest." Front free end-papers heavily annotated (presumably by this same owner, in Latin, Greek, and German. The annotations include and elaborate handwritten index, information about the edition, and references to the Greek sentences. Verso of last leaf and back end-papers also with notes. A few underlinings here and there. Woodcut ornamental title-border, woodcut vignettes, woodcut initials, numerous woodcut illustrations and diagrams in the text. Greek-Latin parallel-text. (8), 831, (1) pp.

The very rare first edition of Julius Pace's seminal "Organon"-edition, which was the standard-edition of the logical texts of Aristotle throughout more than a century, running through at least 11 editions before 1624. Pace's version of the text, in Greek-Latin parallels, and with Pace's inspired commentaries and interpretations, profoundly influenced Renaissance thought, determining the course of the Organon-interpretation throughout this period and inspiring much original philosophical thought. Pace's interpretation of Aristotle's logical works - arguably the most influential collection of works in the history of Western thought - not only changed the face of Renaissance thought, it has remained the authoritative reading of Aristotle's "Organon" to this day and is still considered the most important and authoritative reading of the texts. As Ross puts it in the Preface to his translation of the logical works (the standard Oxford-edition): "My chief authority in matters of interpretation has been Pacius". ("The Works of Aristotle Translated into English Under the Editorship of W.D. Ross. Volume I". Oxford University Press). To this day, a proper study of Aristotle's "Organon" - and Porphyrios' "Isagoge" - is still unthinkable without references to Pace, his rendering of the text, and his interpretations of it. The famous "Porphyrian Tree" or "arbor porphyriana", which has gone down in history as a standard presentation of the basis of Aristotle's thought, was presented by Porphyrios in his "Isagoge", which since Antiquity has accompanied Aristotle's "Ornanon" as an introduction thereof. The standard presentation of this tree is that of Pace in the present edition, on p. 9. It is that rendering of it, with occasional slight alterations, which has remained standard ever since 1584.

That which we ever since Antiquity have called the "Organon" comprises the logical works of Aristotle: 1. Categories, 2. On Interpretation, 3. Prior Analytics, 4. Posterior Analytics, 5. Topics, 6. On Sophistical Refutations - which ever since late Antiquity/early Middle Ages have been accompanied by Porphyrios' (233/34-ca.310) "Isagoge", his introduction to Aristotle's "Categories". During the Renaissance, all editions of Aristotle's "Organon" also comprised Porphyrios' "Isagoge", which was seen as necessary for the understanding of Aristotle's logic.

From Antiquity, the earlier middle ages had inherited Boethius' translation of the two first treatises of Aristotle's "Organon", along with Porphyrios' "Isagoge". These works formed the basis for logical study and teaching until the end of the 11th century. Only during the 12th and 13th centuries, were Aristotle's writings - along with those of the Arabic and some of the Greek commentators - translated into Latin. When the medieval universities reached their full development during the thirteenth century, Aristotle's works were adapted as the standard textbooks for all philosophical disciplines - thus modern terms for many philosophical and scientific disciplines correspond to the titles of Aristotle's works (e.g. Ethics, Physics, Metaphysics). Through Aristotle's works, the West thus acquired, not only the specific problems and ideas that were being dealt with at the universities, but also the terminology used to describe and discuss them and the systematic framework within which all relevant problems should and could be treated. But come the Renaissance, we see a clear change in the use of Aristotle's works. We here witness something other than a mere continuation of the late medieval Aristotelianism. The Humanists began supplying new translations of Aristotle's works and translated all the Greek commentators of Aristotle, many of them for the first time. And thus, a tendency to emphasize the original Greek Aristotle developed, a tendency that became pivotal for the development of modern thought - the development of modern science and modern philosophy is inextricably linked with the Renaissance Humanist editions of Aristotle's works in Greek (with Latin parallel-text). The "Organon", Aristotle's seminal logical writings, occupies a central position within the Aristotelian body of writing and thus within the development of Western thought. Certain Humanist versions of the Greek text and the Latin translations, as well as the interpretations of them, thus came to play a seminal role in the trajectory of Renaissance and modern though, Pace's "Organon"-edition presumably being THE most important and influential edition ever to have appeared.

"The medieval traditions of logical writing survived well into the sixteenth century particularly at Paris and at the Spanish universities, though with considerable internal changes. Treatises on sophisms and on proofs of terms ceased to be written; whereas there was a sudden flurry of activity concerned with the various divisions of terms and with the opposition of propositions, i.e. the logical relations between different kinds of categorical proposition. These internal changes were not, however, sufficient to keep the tradition alive, and after about 1530 not only did new writing on the specifically medieval contributions to logic cease, but the publication of medieval logicians virtually ceased. The main exceptions were the logical commentaries by (or attributed to) such authors as Thomas Aquinas and John Duns Scotus, which found a place in their "Opera Omnia", and which benefited from a revived interest in the great medieval metaphysicians.
The main changes in the teaching and writing of logic during the sixteenth century were due to the impact of humanism. First, commentaries on Aristotle came to display a totally new style of writing. One reason for this was the influence of new translations of Aristotle, and new attitudes to the Greek text. Another reason was the publication of the Greek commentators on Aristotle's logic, Alexander, Themistius, Ammonius, Philoponus and Simplicius. A third reason was the new emphasis on Averroes, which expressed itself in the great Aristotle-Averroes edition of 1550-1552. The effects of these new factors can be seen in the commentaries on individual works of the "Organon" by such Italians as Agostino Nifo (1473-1546) and Jacopo Zabarella (1533-1589), the latter of whom offered a particularly influential account of scientific method. They can also be seen in the "Organon" edition of Giulio Pace (1550-1635), which was first published in 1584 and contained the Greek text side-by-side with a new translation which was designed not only to read well but also to capture the philosophical significance of Aristotle's words." (Raul Corazzon, "History of Renaissance and Modern Logic from 1400 to Stuart Mill").

"No editor better understood the nature of this Treatise of Aristotle than Julius Pacius, who was the preceptor of Casaubon, and profoundedly skilled in all the arcane of the Peripatetic philosophy, in both the Greek and Latin tongues." (Dibdin I: 318)

Giulio Pace of Beriga (or Julius Pace/Pacius) (1550 - 1635) was a famous Italian Aristotelian scholar and jurist. He was born in Vicenza and studied law and philosophy in Padua. He was inspired by the Reformation and put on trial by the Inquisition. Therefore he had to flee Italy and escaped, first to Geneva, thereafter to Germany. While in Heidelberg, he converted to Protestantism. He was highly respected as an academic and was widely known for his deep knowledge and understanding of Aristotle, whom he became famous for translating. He was elected public professor in Geneva, where he taught for ten years (1575-1585). The next ten years he spent teaching law at the University of Heidelberg (where he got into different conflicts, especially with the philosophical faculty for giving private tuition in the controversial Ramist logic). After Heidelberg, he taught at different universities throughout Europe, where he was especially well known for his 1584-edition of Aristotle's "Organon", which played a definitive role in Aristotle-scholarship and philosophy in general throughout all of Europe.