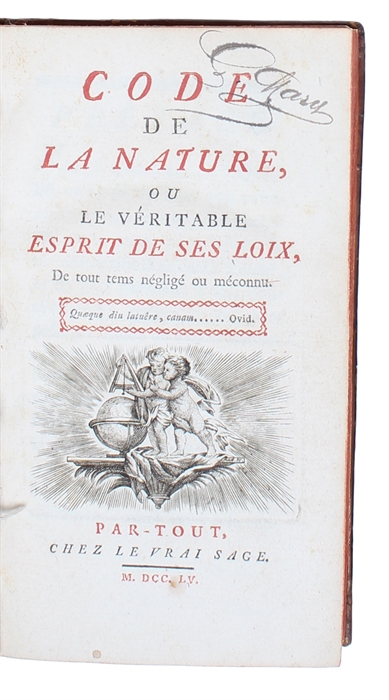 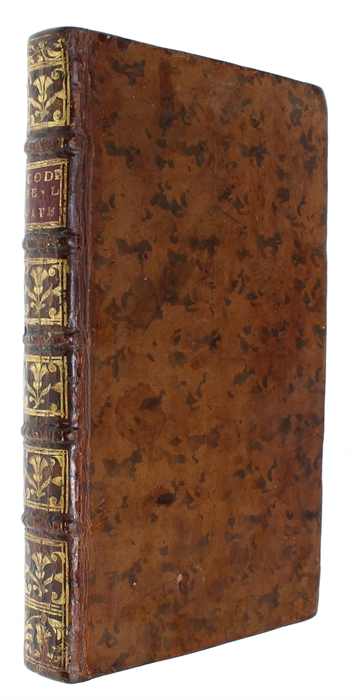 A FORERUNNER OF MARX & ENGELS

First edition of this canonical work of revolutionary utopianism, Morelly's main work, which greatly influenced later socialist and communist thought and which constitutes a forerunner of the works of Marx and Engels.

The work was published anonymously and the author Étienne-Gabriel Morelly (1717 - 1778) remains a bit of a mystery about whom very little is known. At first, "The Code of Nature" was attributed to Denis Diderot, but other great authors of the day have also been proposed.

"The Code of Nature" constitutes an early example of utopian socialist thought, providing a detailed plan for the establishment of a perfect state. It severely criticized the society of the time and proposed a constitution intended to lead to an egalitarian society without property, marriage, church or police. Based upon the principle that man is by nature good and the view that all social and moral ills were consequences of private property, it argues for an egalitarian society in which almost all private property - and thereby all of its pernicious consequences - is eliminated. Due to these radical views, Morelly is considered a significant forerunner of later socialist and communist thinkers, including Marx, Engels, Fourier, Proudhon, Babeuf, etc.

"The Code of Nature" had in immense impact on contemporary and later thought because it not only constitutes a theoretical utopia, but rather a sound analytical treatise with utopian elements. It reflects a realistic approach to society and includes a legislative program to return the State to a government in accordance with the natural solidarity and affection of humanity in which Morelly believed so strongly.

"The Code of Nature" not only influenced later socialist and communist thinkers, it was also avidly discussed by contemporary Enlightenment thinkers such as Lessing, Wieland, Baumgarten, etc., and the work appeared in numerous editions throughout the 18th century.