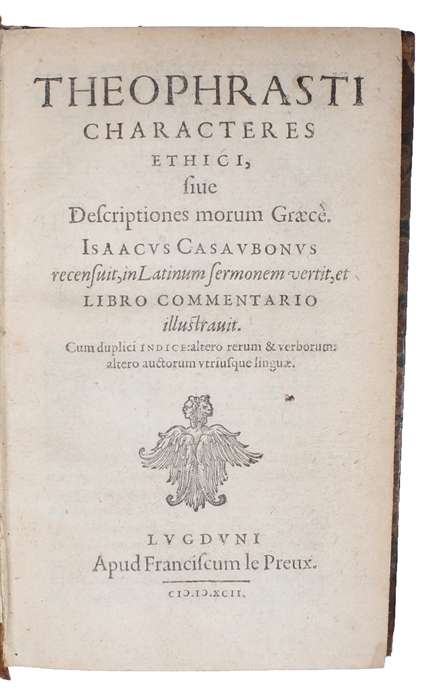 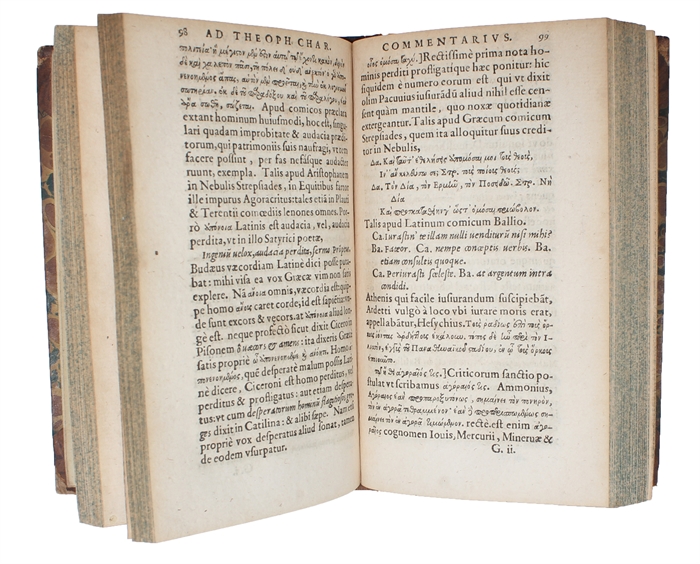 Lyon, Franciscus le Preux, 1592. Small 8o. Early 19th century half calf with gilt title-label to spine. A bit of wear to hinges and corners, but fine and tight. Internally exceptionally nice and clean. P. Rubow's owner's signature to front free end-paper. Woodcut vignettes to title-pages and woodcut initials at beginning of both parts. (8), 88; 270 pp, 1 blank leaf, (16 ff. of indexes and errata at end).

Scarce first edition thus, being the editio princeps of Casaubon's milestone-edition of the seminal work that is Theophrastus' "Characters", containing, apart from the original Greek text and Casaubon's translation of it into Latin, also Casaubon's highly important commentary of the text.

"This edition, which was frequently reprinted (1598-1612-1617-1638, &c.), is in every respect worthy of the high reputation of Casaubon. Both the text and the notes have served almost every subsequent editor. The Commentary is a rich mine of Grecian literature. The editor availed himself of the use of four MSS. in the Palatine library". (Dibdin).

Theophrastus (ca. 371- ca. 287 BC), Aristotle's successor at the Lyceum, and probably the most famous Aristotelian of all times, successfully presided over the Peripatetic School for 36 years and here wrote a number of works. The most famous of them is arguably his great moral opus "The Characters", which continues to amaze readers to this day. It introduced the "character sketch", which became the core of the Character as a genre, and as such influenced the entire literary tradition of the Western world.

The fabulous, very witty, astute, harsh, and insightful characteristics of type characters of the human race have been formative for our understanding of moral virtues and vices and for how man expresses them, for our understanding of human nature in general. It is no wonder that the work became so popular and widely read during the Renaissance, the era of man as the centre of the universe.

The French-English classical scholar and philologist Isaac Casaubon (1559 - 1614) was regarded by many of his time as the most learned man in Europe. He is famous for his magnificent commentaries and deep understanding of the texts that he edited, translated, and commented. His edition of Theophrastus's Characters is considered a work of breakthrough, as it constitutes the first example of his peculiar style of illustrative commentary, at once apposite and profuse. This work is generally considered to exhibit his most characteristic excellences as a commentator.

The present edition came to exercise a profound influence upon the interpretation of Theophrastus' great work. Casaubon's commentary served as the standard commentary for centuries, and his translation remains a standard translation of the text. The present work thus remains a primary reference and a primary source when reading the work today.
The commentary provided much commentary on Athenian society, and the translation popularized the text, making it available to modern (Renaissance) readers. Due to the excellent manner of translation into Latin, the first English and French translations of this foundational text were enabled.

The work was reprinted numerous times and kept appearing for centuries.