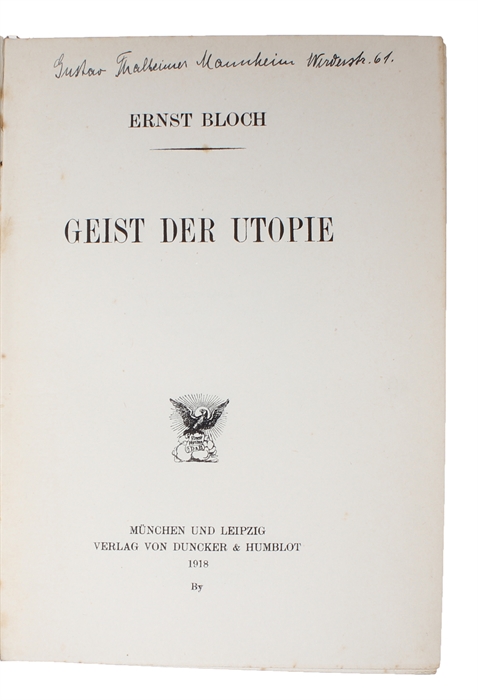 THE MAIN WORK OF GERMAN EXPRESSIONISM

The rare first edition of Bloch's first major work, "The Spirit of Utopia", an expressionalist main work, which attempts to unite Marxism with Jewish-Christian messianism.

The hugely influential German philosopher Ernst Bloch (1885-1977) was born as the son of Jewish parents in Ludwigshafen. He studied philosophy, physics, German and music in Munich and Würzburg and later became a main figure in Neomarxism. His first book, "Geist der Utopie" was written while Bloch was in exile in Switzerland during the First World War, and in this seminal work we find the cornerstones of his later so influential philosophy.

In the "Spirit of Utopia", Bloch unites Marxism Jewish-Christian messianism by the common utopian element of both views: Hope, and faith in the fact that the world will and can become a better place. Bloch here set out to defend the attempts of humankind throughout history to create a humane world order, against the determinist socialism that viewed socialism as the inevitable result of history. With Marx and with the love and morality of religion, Bloch places man (that thinks of the common good) at the centre of his thinking as well as the metaphysical ideas of that which is not yet, but which can become. And thus he creates the spirit of utopia, due to which man can make the world a better place.

This massive work of art begins with the powerful words: "What now? It is enough. Now we have to begin. Life has been put in our hands. In itself it has already become empty long ago. It staggers senselessly around, but we stand firm, and thus we want to be its Faustus and its ends." ("Wie nun? Es ist genug. Nun haben wir zu beginnen. In unsere Hände ist das Leben gegeben. Für sich selber ist es längst schon leer geworden. Es taumelt sinnlos hin und her, aber wir stehen fest, und so wollen wir ihm seine Faust und seine Ziele werden.") (P.9).

The work was viewed as attacking the traditional Marxism of the time, and thus it was very controversial but also became hugely influential in the development of social liberation. Bloch is now considered one of the most undogmatic Marxists of the past century, and he influenced later political and philosophical thinkers enormously. Adorno himself cited this text of Bloch as having been transformative for his intellectual life, and as stated on the wrapper of the English translation, "When this work was first published, it had a profound effect on major thinkers and artists in Weimar Germany. A poetical philosophical treatise with unusual insights into culture and political commentary, Bloch' s book laid the groundwork for thinkers like Adorno and Benjamin." (Jack Zipes, University of Minnesota).

This rare highly expressionist work consists of 445 pages of non-dogmatic strongly expressionistic and very influential recipes on and analyses of how man does and should behave in the humane world. "But in return, we paint like savages again, in the best sense, in the sense of the primordial, the restless, unconcerned, concerned. For this is more or less how the dancing-mask was carved. This is more or less how primitive man shaped his fetishes, if only the simple need to express oneself should again be the same" ("Aber dafür malen wir auch wieder wie die Wilden, im besten Sinn des Frühen, Unruhigen und Barbarischen genommen. So ungefähr wurde auch die Tanzmaske geschnitzt, so ungefähr baute sich der primitive Mensch seinen Fetisch zurecht, sollte auch nichts als die Not des Aussprechenmüssens wieder dieselbe geworden sein."). (P. 19).

The work was much re-written, and the first editions differs from all later editions.