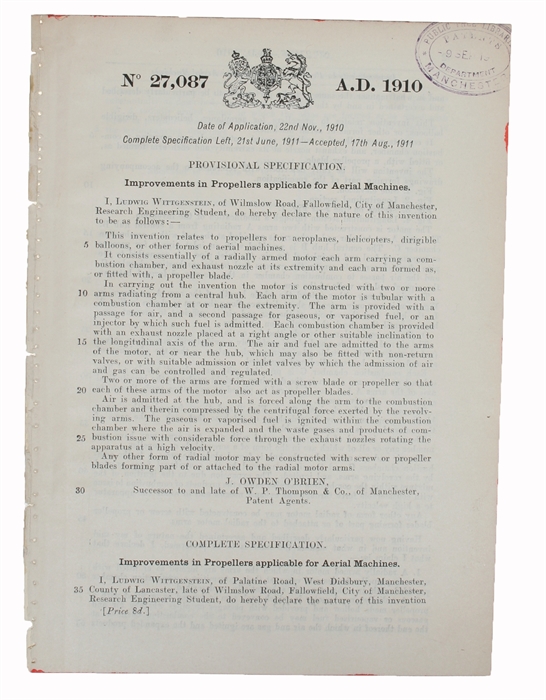 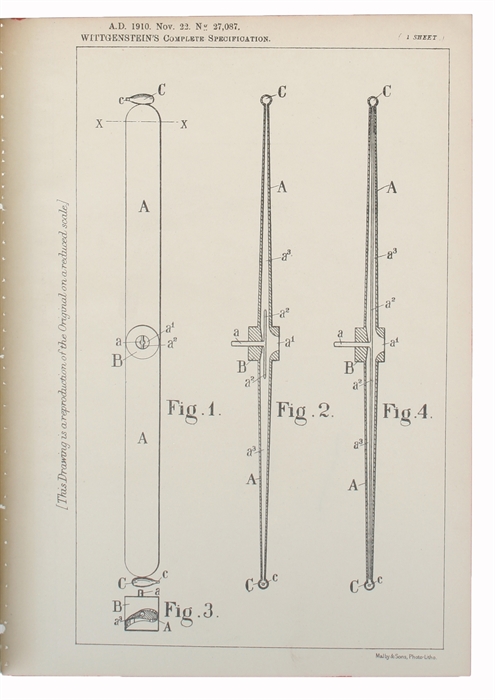 The extremely rare propeller patent that constitutes Wittgenstein's first publication, and without doubt the scarcest. It is his work on the propeller presented here and the mathematical problems associated with the development of it that leads Wittgenstein to consider the foundations of mathematics, considerations that directly lead him to philosophy and logic and to an immediate change of career, without which the entire tradition of modern philosophy and logic would have looked completely different. The present publication, published at the mere age of 21, is arguably responsible for catapulting Wittgenstein into his philosophical career. After taking out the patent, Wittgenstein quit his aeronautical career and stopped working on his jet-engine. Not until recently has the great importance of the invention to early aviation been recognized - Wittgenstein's scheme anticipated by three decades developments in which blade-tip jets were used to drive the rotors of hybrid helicopters. Wittgenstein's patent had within it the seeds of the centrifugal-flow gas turbine engine, later to be developed in the 1930'ies by Frank Whittle, the father of jet-propulsion and the inventor of the torbojet engine. About 30 years after Wittgenstein's invention, the engine was reinvented, by Friedrich Doblhoff, this time leading to a completely new concept for a helicopter, which was successfully tested for the first time in 1943. The patent was unknown to all Wittgenstein biographers and scholars, confirming the extreme scarcity of it. Only von Wright mentions Wiggtenstein's work, and only indirectly, probably not knowing about the patent. Wittgenstein apparently told him "the problem on which he worked at Manchester has since become very urgent". Von Wright's assumption was that he was referring to the emergence of reaction engines in modern aircraft.