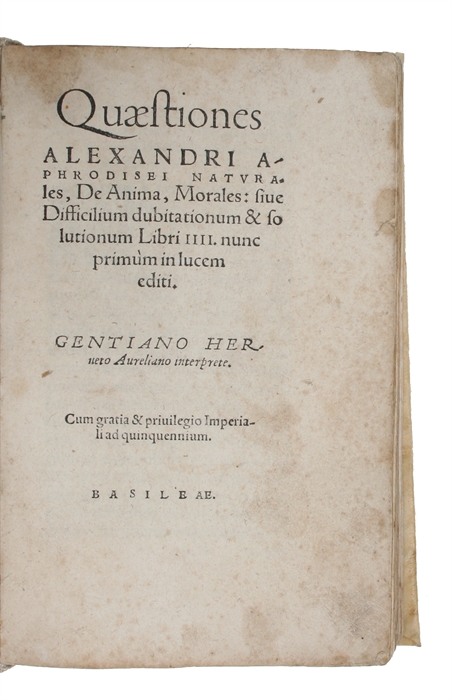 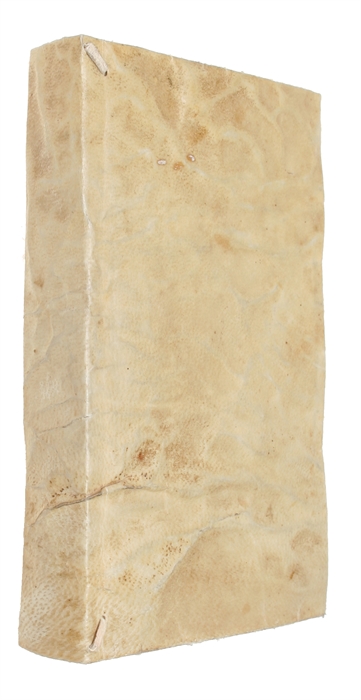 THE HERVET-EDITION OF ALEXANDER'S "QUAESTIONES"

Basel, (Iohnnes Oporinus, 1548 - on colophon). 8vo. Contemporary full limp vellum. A bit of soiling and light brownspotting to title-page, otherwise very nice and clean. The printer's name has been removed from the colophon, causing two small holes, which have been neatly repaired from verso. Two small holes corresonding to these to the second-last leaf, causing loss of a couple of letters. All in all a very nice copy. Woodcut initials. (16), 297, (6 - Life of Aristotle) pp.

The scarce first edition of leading French Humanist Catholic Gentian Hervet's important translation of Alexander's hugely influential "Quaestiones", presumably with this fourth part (which is not the "De Fato" as in other Renaissance editions) for the first time in print.

Hervet's edition of Alexander's "Questiones" came to have a profound influence on the development of Renaissance Aristotelianism. The "Questiones" had appeared earlier, e.g. in 1541, and were by no means unknown to Renaissance thinkers at the time, but Hervet was an authority of a certain character, which meant that his edition was both read in a certain light and preferred by a great deal of thinkers. Furthermore, it seems that the 4th part, being 30 answers to the traditional 69 questions, here appears for the first time in print, making this a very important edition. In addition to the first three parts, it became customary to add a fourth part to Alexander's "Questiones", but that traditional fourth part was his "De Fato", and not as here the 30 solutions. It is worth noting that Hervet had in fact already translated Alexander's "De Fato", which he published in 1544.

Alexander's, also known as simply as "The Commentator", impact upon the development of philosophy can hardly be overestimated, and his various "Problems and Questions", all aimed at establishing the views of Aristotle, came to influence all reading of Aristotle in the Renaissance. "He was read in the classroom of Plotinus, who probably drew on him to a greater extent than we will ever be able to tell; and when later Platonists show themselves critical of Aristotle's arguments, they can often be shown to attack Alexander's interpretation of Aristotle rather than Aristotle himself. The physician Galen, whose logic, epistemology and physics bear a distinctive Peripatetic stamp, chose to disagree with Alexander on, for instance, issues of dynamics and psychology." (p. 244).

Although his "Questions" were aimed at understanding the views of Aristotle, he established the views of the Stagirite in a version updated to take account of Stoic and other alternatives, as the best and most defensible current (i.e. 2nd-3rd cent.) ideas on their subjects. "For Alexander, the inspired genius of Aristotle's writings was a sufficient basis, if they were properly interpreted, explicated, and fleshed out, to resolve with complete satisfaction all the questions debated among philosophers of varying schools in his own time." (Cambr. Comp.). In his seminal "Questiones", he quarrelled with both Platonism and Stoicism in his attempts to develop Peripatetic answers to questions Aristotle had not dealt with in any detail.

It is a curious but generally accepted conception that with the rise of the Renaissance came the fall of Aristotle. Weather this is actually true can be disputed, but it is a fact that with the recovery of many lost works of ancient literature, the widening of the range of classical studies and the renewed interest in Plato, Aristotle was no longer the sole authority on a huge number of fields. That this should mean a total ignorance of the teachings of Aristotle must be considered somewhat of a myth (though a very frequently repeated one), and in fact with the grand humanists of the late 15th and early 16th century, the study of Aristotle fits perfectly with the broader comprehension of scholarship. The great humanists like Ficino, Pico and Pomponazzi had not forgotten about Aristotle, and the revival of learning did not mean the neglect of the prince of philosophers. On the contrary, with the appreciation of the knowledge of Greek and the invention of the printing, works were being translated and printed like never before, which meant that the greatest of the humanists, many of whom did not themselves know Greek, could be acquainted with the Greek texts of Aristotle and the Greek commentaries of "The Commentator", Alexander of Aphrodisias, in Latin translation.

"Equally important for the continued growth of the Peripatetic synthesis was the recovery and diffusion of the Greek commentaries on Aristotle. These treatises, about ten times longer than the works they discuss, were written by pagans and Christians, Platonists and Peripatetics in late antiquity, between the second and seventh centuries in the Greek world of the Eastern Mediterranean, and then again in twelfth-century Byzantium. The most important of the two dozen commentators were Alexander of Aphrodisias, Ammonius, Simplicius, Themistius and John Philoponus. Of these five, only Alexander and Themistius were Aristotelians..." (Copenhaver & Schmitt, p. 68).

One of the most important of these Renaissance Humanists, who with his translations helped spread the knowledge and understanding of Aristotle and his commentators, was Gentian Hervet, who came to play a dominant role in the course of 16th century thought.

"Gentian Hervet (d. 1584) was a committed churchman, who after studies in the universities of Orleans and Paris lived in the household of Reginald Pole, later to become Archbishop of Canterbury and Cardinal, at first in England then - as Pole had, because of the Reformation, to leave England - in Padua, Venice and Rome. Hervet took part with Marcello Cervini (later Pope Marcellus II) in the first sessions of the Council of Trent. He returned to France in 1555 as vicar general to the bishop of Noyon and wrote pamphlets against the Huguenots. In 1561 he entered the service of the Cardinal of Lorraine, Charles de Guise, whom he accompanied to the third period of the Council of Trent (1562-3). In 1564 he took part as canon of the cathedral in the provincial council of Rheims, in which the cardinal published the decrees of the Council of Trent. About the time of his activity in the Council of Trent the focal point of Hervet's translations shifted. He translated not only the Greek Fathers of the Church, but in addition, under the influence of academic scepticism as represented also by Reginal Pole, Sextus Empiricus' "Adversus Mathematicos" (Paris, 1569). He had long been active as translator of works connected with the Aristotelian philosophy. During an earlier sojurn in Rome, he published a number of philosophical texts which concerned the controversies surrounding Pietro Pomponazzi. In 1544 he translated into Latin Aristotle's "De anima", together with the commentary of Johannes Philoponus. There followed translations of Alexander of Aphrodisias's "De fato" (1544) and "Quaestiones naturales et morales" (1548) and of Zacharias Scholasticus's "Ammonius: Dialogus quod mundus non sit Deo coaeternus" (1546). In these works Hervet described those who denied the immortality of the soul as atheists and as opponents of Aristotle and his commentators." (Lohr, p. 36).

"Since the Renaissance had to discover or rediscover the tools of philology and history needed for such detective work, the pioneering labours of obscure humanist scholars - Gentian Hervet, who translated sextus, or William Canter, who first published a Greek text of the "Eclogae" of Stobaeus - certainly deserve our memory and admiration. It was they who first edited, organized, translated, printed, and disseminated the philosophical remains of antiquity that succeeding centuries have come to take for granted. If Thales and his successors were the fathers of Western philosophy, the humanist scholars of the Renaissance were the midwives of its rebirth in a classical form." (Copenhaver & Schmitt, p. 18).