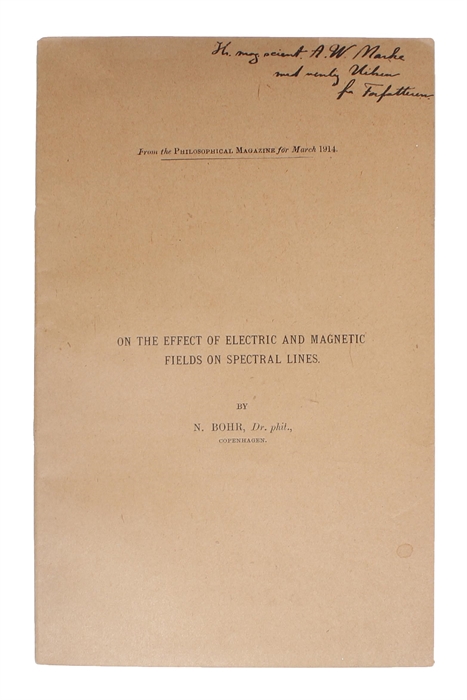 On the Effect of Electric and Magnetic Fields on Spectral Lines. [Off-print From the Philosophical Magazine (Vol. 27) for March 1914].

Scarce first edition, off-print issue with presentation-inscription, of Bohr's first paper on the Stark-effect, being the seminal paper in which Bohr for the first time applies his theory to electric effect and expresses his widening interest in quantum theory.

Axel Waldbuhm Marke (1883 - 1942) was professor of Physics in Copenhagen. His scientific works were originally centred around magnetic investigations, for which he was trained by P. Weiss in Zürich, in 1914. Due to WWI, he had to return, however, and during the difficult journey back, he lost all of his records. In 1916 he published an important work on the thermomagnetic qualities of water, and he has written a number of highly praised text books on physics, optics, meteorology, and climatology. He was renowned for his great skills in popularizing difficult scientific results and was famous for his lectures.

The Stark-effect (the shifting and splitting of spectral lines of atoms and molecules due to presence of an external static electric field) is named after Johannes Stark, who discovered it in 1913. Although Stark shortly after having discovered it became and ally of Nazi Germany and rejected the developments of modern physics, his discovery became of the utmost importance to the development of quantum theory.

"Once again we must go back to November 1913. On the 20th of that month Stark announced to the Prussian Academy of Sciences an important new discovery: when atomic hydrogen is exposed to a static electric field its spectral lines split, the amount of splitting being proportional to the field strength. (the linear Stak effect). After Rutherford read this news in "Nature", he at once wrote Bohr: "I think it is rather up to you at the present to write something on... electric effects."
We now encounter for the first time the widening interest in quantum theory [...] Even before Bohr sat down to work on the Stark effect, Warburg from Berlin published an article in which the Bohr theory is applied to this new phenomenon. Bohr's own paper [i.e. the present] on the subject appeared in March 1914. The next year he returned to the same topic." (Pais, Niels Bohr's Times, p. 182).