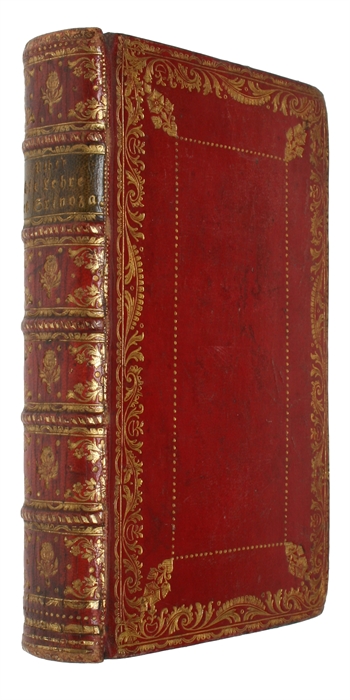 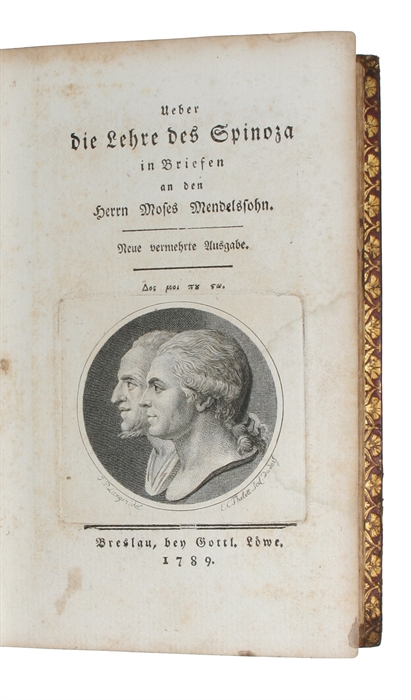 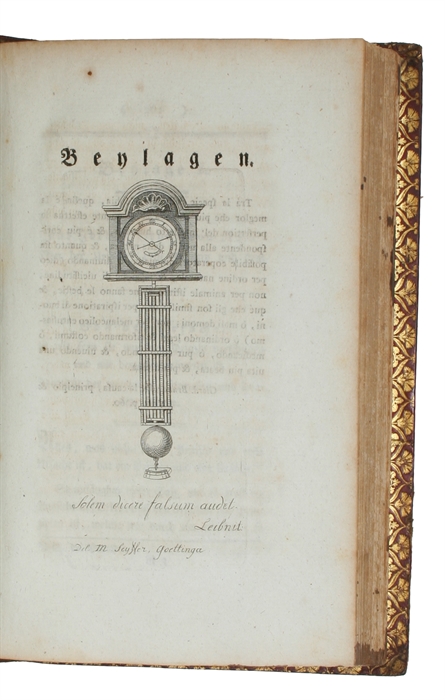 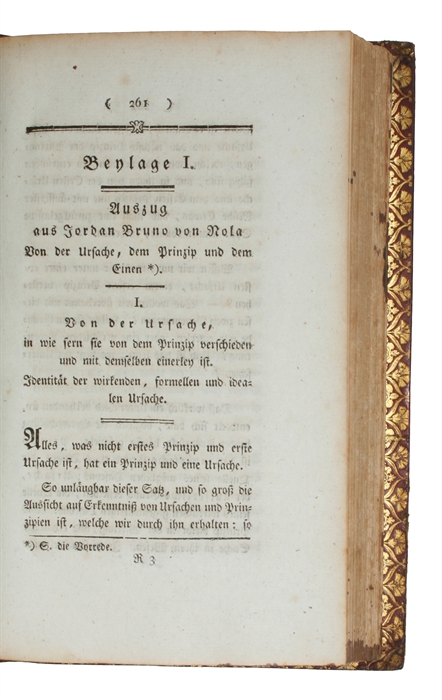 THE FIRST EVER TRANSLATION OF BRUNO'S "DE UNO ET CAUSA"...

First edition thus, being the seminal second edition, the "neue vermehrte Auflage" (new and expanded edition), which has the hugely important 180 pp. of "Beylage" for the first time, which include the first translation into any language of any part of Giordano Bruno's "de Uno et Causa..." (pp. 261-306) as well as several other pieces of great importance to the "Pantheismusstreit" and to the interpretation of the philosophy of Spinoza and Leibniz, here for the first time in print.

The present translation of Bruno seems to be the earliest translation of any of Bruno's works into German, and one of the earliest translations of Bruno at all - as far as we can establish, the second, only preceded by an 18th century translation into English of "Spaccio della bestia trionfante". It is with the present edition of Jacobi's work that the interest in Bruno is founded and with which Bruno is properly introduced to the modern world. Jacobi not only provides what is supposedly the second earliest translation of any of Bruno's works ever to appear, he also establishes the great influence that Bruno had on two of our greatest thinkers, Spinoza and Leibnitz. It is now generally accepted that Spinoza founds his ethical thought upon Bruno and that Lebnitz has taken his concept of the "Monads" from him. It is Jacobi who, with the second edition of his "Letters on Spinoza...", for the first time ever puts Bruno where he belongs and establishes his position as one of the key figures of modern philosophy and thought.

Bruno's works, the first editions of which are all of the utmost scarcity, were not reprinted in their time, and new editions of them did not begin appearing until the 19th century. For three centuries his works had been hidden away in libraries, where only few people had access to them. Thus, as important as his teachings were, thinkers of the ages to come were largely reliant on more or less reliable renderings and reproductions of his thoughts. As Jacobi states in the preface to the second edition of his "Letters on Spinoza...", "There appears in this new edition, under the title of Appendices ("Beylage"), different essays, of which I will here first give an account. The first Appendix is an excerpt from the extremely rare book "De la causa, principio, et Uno", by Jordan Bruno. This strange man was born, one knows not in which year, in Nola, in the Kingdom of Naples; and died on February 17th 1600 in Rome on the stake. With great diligence Brucker has been gathering information on him, but in spite of that has only been able to deliver fragments [not in translation]. For a long time his works were, partly neglected due to their obscurity, partly not respected due to the prejudice against the new opinions and thoughts expressed in them, and partly loathed and suppressed due to the dangerous teachings they could contain. On these grounds, the current scarcity of his works is easily understood. Brucker could only get to see the work "De Minimo", La Croce only had the book "De Immenso et Innumerabilibus" in front of him, or at least he only provides excerpts from this [also not in translation], as Heumann does only from the "Physical Theorems" [also small fragments, not in translation]; also Bayle had, of Bruno's metaphysical works, himself also merely read this work, of which I here provide an excerpt." (Vorrede, pp. (VII)-VIII - own translation from the German).

Jacobi continues by stating that although everyone complains about the obscurity of Bruno's teachings and thoughts, some of the greatest thinkers, such as Gassendi, Descartes, "and our own Leibnitz" (p. IX) have taken important parts of their theorems and teachings from him. "I will not discuss this further, and will merely state as to the great obscurity ("grossen Dunkelheit") of which people accuse Bruno, that I have found this in neither his book "de la Causa" nor in "De l'Infinito Universo et Mondi", of which I will speak implicitly on another occasion. As to the first book, my readers will be able to judge for themselves from the sample ("Probe") that I here present. My excerpt can have become a bit more comprehensible due to the fact that I have only presented the System of Bruno himself, the "Philosophia Nolana" which he himself calls it, in its continuity... My main purpose with this excerpt is, by uniting Bruno with Spinoza, at the same time to show and explain the "Summa of Philosophy" ("Summa der Philosophie") of "En kai Pan" [in Greek characters - meaning "One and All"]. ... It is very difficult to outline "Pantheism" in its broader sense more purely and more beautifully than Bruno has done." (Vorrede pp. IX-XI - own translation from the German).

So not only does Jacobi here provide this groundbreaking piece of Bruno's philosophy in the first translation ever, and not only does he provide one of the most important interpretations of Spinoza's philosophy and establishes the importance of Bruno to much of modern thought, he also presents Bruno as the primary exponent of "pantheism", thereby using Bruno to change the trajectory of modern thought and influencing all philosophy of the decades to come. After the second edition of Jacobi's "Ueber die Lehre des Spinoza", no self-respecting thinker could neglect the teachings of Bruno; he could no longer be written off as having "obscure" and insignificant teachings, and one could no longer read Spinoza nor Leibnitz without thinking of Bruno. It is with this edition that the world rediscovers Bruno, never to forget him again.

WITH THE FIRST EDITION OF "UEBER DIE LEHRE DES SPINOZA" (1785), JACOBI BEGINS THE FAMOUS "PATHEISMUSSTREIT", which focused attention on the apparent conflict between human freedom and any systematic, philosophical interpretation of reality.
In 1780, Jacobi (1743-1819), famous for coining the term nihilism, advocating "belief" and "revelation" instead of speculative reason, thereby anticipating much of present-day literature, and for his critique of the Sturm-und-Drang-era, had a conversation with Lessing, in which Lessing stated that the only true philosophy was Spinozism. This led Jacobi to a protracted and serious study of Spinoza's works. After Lessing's death, in 1783 Jacobi began a lengthy letter-correspondende with Mendelssohn, a close friend of Lessing, on the philosophy of Spinoza. These letters, with commentaries by Jacobi, are what constitute the first edition of "Ueber die lehre des Spinoza", as well as the first part of the second edition. The second edition is of much greater importance, however, due to greatly influential Appendices. The work caused great furor and the enmity of the Enlightenment thinkers. Jacobi was ridiculed by his contemporaries for attempting to reintroduce into philosophy belief instead of reason, was seen as an enemy of reason and Enlightenment, as a pietist, and as a Jesuit.

But the publication of the work not only caused great furor in wider philosophical circles, there was also a personal side to the scandal which has made it one of the most debated books of the period:
"Mendelssohn enjoyed, as noted at the outset, a lifelong friendship with G. E. Lessing... Along with Mendelssohn, Lessing embraced the idea of a purely rational religion and would endorse Mendelssohn's declaration: "My religion recognizes no obligation to resolve doubt other than through rational means; and it commands no mere faith in eternal truths" (Gesammelte Schriften, Volume 3/2, p. 205). To pietists of the day, such declarations were scandalous subterfuges of an Enlightenment project of assimilating religion to natural reason... While Mendelssohn skillfully avoided that confrontation, he found himself reluctantly unable to remain silent when, after Lessing's death, F. H. Jacobi contended that Lessing embraced Spinoza's pantheism and thus exemplified the Enlightenment's supposedly inevitable descent into irreligion.
Following private correspondence with Jacobi on the issue and an extended period when Jacobi (in personal straits at the time) did not respond to his objections, Mendelssohn attempted to set the record straight about Lessing's Spinozism in "Morning Hours". Learning of Mendelssohn's plans incensed Jacobi who expected to be consulted first and who accordingly responded by publishing, without Mendelssohn's consent, their correspondence - "On the Teaching of Spinoza in Letters to Mr. Moses Mendelssohn" - a month before the publication of "Morning Hours". Distressed on personal as well as intellectual levels by the controversy over his departed friend's pantheism, Mendelssohn countered with a hastily composed piece, "To the Friends of Lessing: an Appendix to Mr. Jacobi's Correspondence on the Teaching of Spinoza". According to legend, so anxious was Mendelssohn to get the manuscript to the publisher that, forgetting his overcoat on a bitterly cold New Year's eve, he delivered the manuscript on foot to the publisher. That night he came down with a cold from which he died four days later, prompting his friends to charge Jacobi with responsibility for Mendelssohn's death.
The sensationalist character of the controversy should not obscure the substance and importance of Mendelssohn's debate with Jacobi. Jacobi had contended that Spinozism is the only consistent position for a metaphysics based upon reason alone and that the only solution to this metaphysics so detrimental to religion and morality is a leap of faith, that salto mortale that poor Lessing famously refused to make. Mendelssohn counters Jacobi's first contention by attempting to demonstrate the metaphysical inconsistency of Spinozism. He takes aim at Jacobi's second contention by demonstrating how the "purified Spinozism" or "refined pantheism" embraced by Lessing is, in the end, only nominally different from theism and thus a threat neither to religion nor to morality." (SEP).

The Beylagen, which are not included in the 1785 first edition and only appear with the 1789 second edition, include: I. Auszug aus Jordan Bruno von Nola. Von der Ursache, dem Princip und dem Einen (p. 261-306) II. Diokles an Diotime über den Atheismus (p. 307-327) translation of Lettre ... sur l'Athéisme by F. Hemsterhuis.