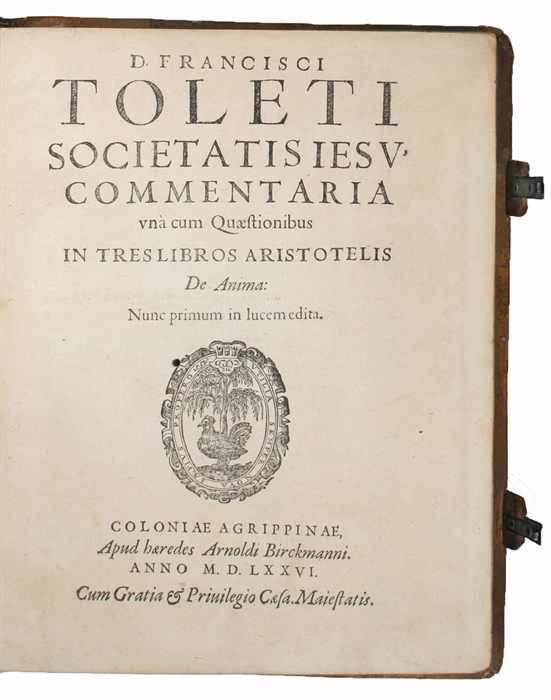 The extremely scarce second edition of Toletus' hugely important commentary, with the equally important questions, on Aristotle's "On the Soul", being one of the most important Renaissance commentaries on one of the most influential and commented on philosophical works of all times. The work was of great importance to late Renaissance thought and the theories presented here widely influenced seventeenth-century scholasticism.

This highly influential and extremely popular work originally appeared in 1575 and was reprinted twenty-two times by 1625. The 1570'ies editions of the work are of the utmost scarcity. No auction records have been noted within the last 40 years, the only one being the 1583-edition, which is also the most commonly found in library-holdings; only two copies of the first edition from 1575 are in libraries worldwide, and likewise merely two copies of this second edition. Apart from those four copies, the earliest edition listed by OCLC is that from 1580.

Franciscus Toletus (Francisco de Toledo Herrara) (1532-1596) was a highly important Spanish Jesuit theologian, Biblical exegete and the first Jesuit Cardinal. After receiving a master of arts at Valencia, he studied theology at Salamanca under the famous Domingo de Soto. He was ordained a priest in 1556 and was already teaching philosophy at Salamanca when he became a Jesuit in 1558. In the following year he was sent to Rome where he taught philosophy and then theology, bringing with him the Thomistic outlook emphasized at Salamanca by Francisco de Vitoria and his disciple, Soto. In 1593 he became the first Jesuit cardinal.

Toletus was an independent, clear thinker with a fundamentally Thomistic outlook. In philosophy his most important works were his commentaries on Aristotle's logic and treatise on the soul, which were widely read and discussed in his time. In these, he drew upon the whole previous scholastic tradition to raise and answer the most important philosophical questions of his time. His works are especially interesting, as he was neither a slavish follower of Aristotle nor limited to defend any medieval scholar of his own community, as were many other commentators of the period. Governed by reason, he respectfully and clearly analyzes the key text of the greatest philosopher of all times and draws out his own philosophical theories.

"Although Ignatius Loyola, the founder of the Society (the Jesuits), had established Aristotle as the basic philosophical authority and Thomas as the guide to philosophy as well as theology, the Thomism of the Jesuits turned out to be a rather moderate one, which neither closed the doors on differing positions, such as those of the Scotists and the nominalists in psychology, nor prevented its members from developing new positions of their own. An early example of this attitude was Franciscus Toletus. His commentary on "De anima", first published at Cologne in 1575, followed the traditional division of Averroes, but also gave the Greek division of the text into chapters and had the third book begin according to Greek tradition. The authors upon whom Toletus depended were the Latin commentators, especially Thomas, as well as the Greeks and Arabs, with special attention given to Averroes. However rich his commentary, the major philosophical discussion is found in the more than seventy "quaestiones", which resemble a systematic treatise." (Schmitt, Skinner, Kessler, "The Cambridge History of Renaissance Philosophy", p. 511).

If one question is to be pointed out as the main philosophical one of the Renaissance, it is that of the soul's relation to reason or intelligence. " "Anima" and "Intellectus" were then the watchwords of the schools: their relation, or the nature of "anima intellective", was the point round which discussion moved and on which was invoked the authority of Averroes, Alexander or St Thomas. When the audiences in the Italian class-rooms called out "Quid de anima?" this was the subject which they desired to hear treated." (Douglas, p. 74).

For Toletus, intellectual abstraction is simply a precision from accidents and a consideration of the substance of anything. In his great "De anima"-commentary, he allowed for a direct intellectual cognition of a singular material thing. And although he thinks it more probable that an agent intellect is necessary, he regards it as probable that there is no agent intellect or that the two intellects distinguished by Aristotle are one and the same. "Toletus followed a Thomistic line, but departed from Thomism in some details. He held that individuals are directly apprehended by the intellect and that the agent intellect is the same power as the possible intellect. He rejected the Thomistic doctrines of the real distinction between essence and existence and of individuation by designated matter; for Toletus individuation results from form." (Cambr. Dict. of Phil.).

"Having already stated that the basic psychological positions of the church were identical with those of true philosophy, Toletus was less anxious in philosophical argument itself to adhere to the faith and more open to strictly philosophical values. This applied particularly to the problem of immortality. Citing the volitional aspects of the human soul as well as the intellectual ones, he argued that immortality could be demonstrated by natural means, while admitting that Aristotle himself was unclear on the question…." (Schmitt, Skinner, Kessler, "The Cambridge History of Renaissance Philosophy", p. 511).

Toletus stands at the very centre of 16th century Spanish scholarship and counts as one of the most important Aristotle scholars of this tradition. His works formed the basis of Jesuit teaching in logic until the end of the 1600s.