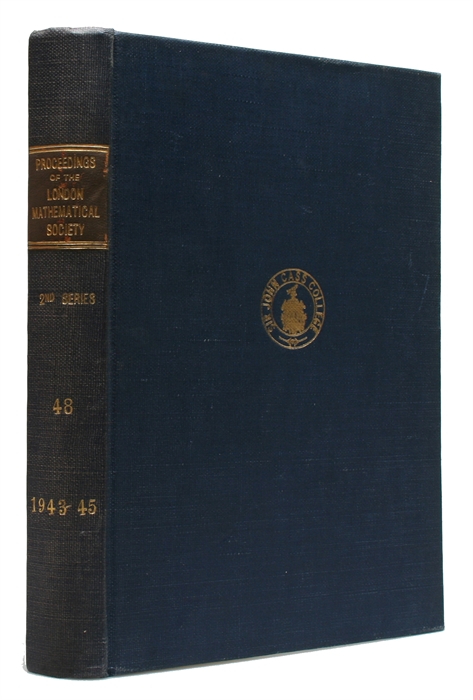 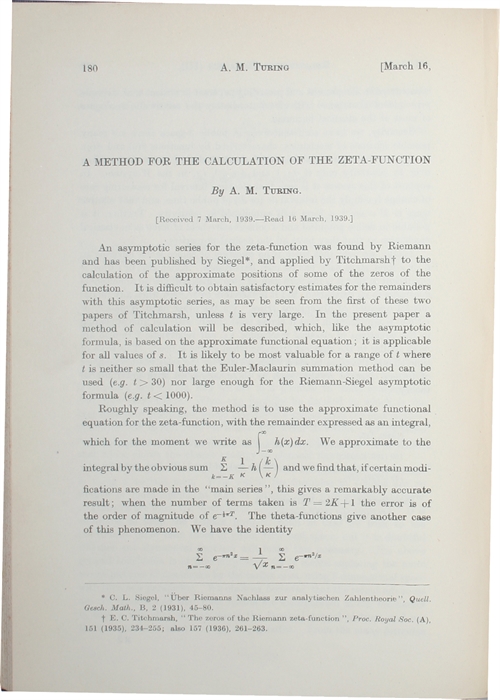 TURING'S FIRST WORK ON THE ZETA-FUNCTION

London, Hodgson & Son, 1945. Royal 8vo. Entire volume 48 of "Proceedings of the London Mathematical Society. Second Series" bound in a nice contemporary blue full cloth binding with gilt ex-libris ("Sir John Cass College") to front board and gilt title-label and year to spine. Very minor wear to extremities. Nicely re-enforced at inner hinges. A very nice, clean, and tight copy. Large library-book-plate to inside of front board (stating that the volume was presented by "Dr. A.E.R. Church"), with "withdrawn"-stamp. Also "withdrawn"-stamp to title-page and to final page, and a library-stamp to p. (1). Otherwise a nice and clean copy with no markings, etc. Pp. 180-197. [Entire volume: (4),477, (1) pp.

The very rare first printing of Turing's first published paper devoted to the Riemann-zeta function, the basis for his famous "Zeta-function Machine", a foundation for the digital computer.

While working on his Ph.D.-thesis, Turing was concerned with a few other subjects as well, one of them seemingly having nothing to do with logic, namely that of analytic number theory. The problem that Turing here took up was that of the famous Riemann Hypothesis, more precisely the aspect of it that concerns the distribution of prime numbers. This is the problem that Hilbert in 1900 listed as one of the most important unsolved problems of mathematics. Turing began investigating the zeros of the Rieman zeta-function and certain of its consequences. The initial work on this was never published, though, but nevertheless he continued his work. "Turing had ideas for the design of an "analogue" machine for calculating the zeros of the Riemann zeta-function, similar to the one used in Liverpool for calculating the tides." (Herken, The Universal Turing Machine: A Half-Century Survey, p. 110).

Having worked on the zeta-function since his Ph.D.-thesis but never having published anything directly on the topic, Turing began working as chief cryptanalyst during the Second World War and thus postponed this important work till after the war. Thus, it was not until 1945 that he was actually able to publish his first work on this most important subject, namely the work that he had presented already in 1939, the groundbreaking "A Method for the Calculation of the Zeta-Function", which constitutes his first printed contribution to the subject.

"After the publication of his paper "On computable Numbers," Turing had begun investigating the Riemann zeta-function calculation, an aspect of the Riemann hypothesis concerning the distribution of prime numbers... Turing's work on this problem was interrupted by World War II, but in 1950 he resumed his investigations with the aid of the Manchester University Mark I [one of the earliest general purpose digital computers]..." (Origins of Cyberspace p. 468).