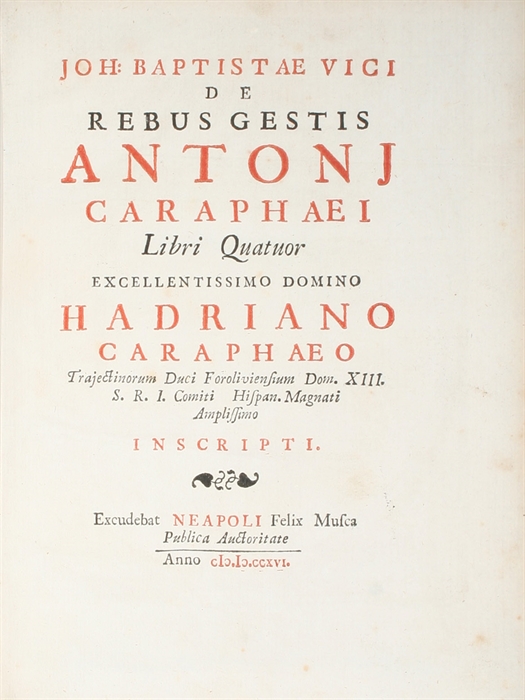 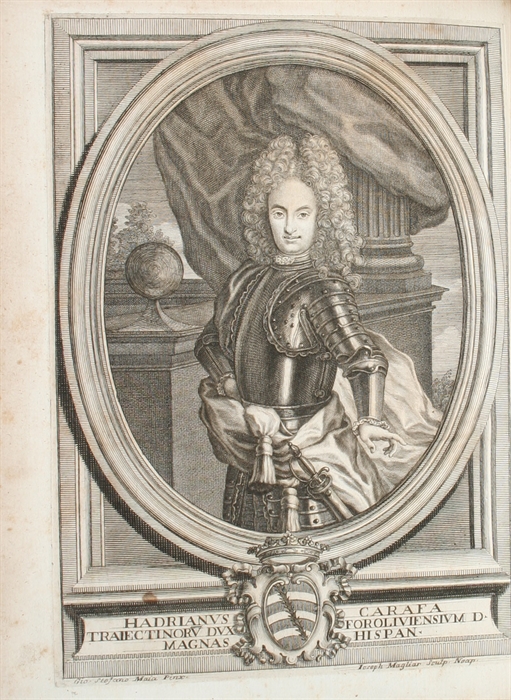 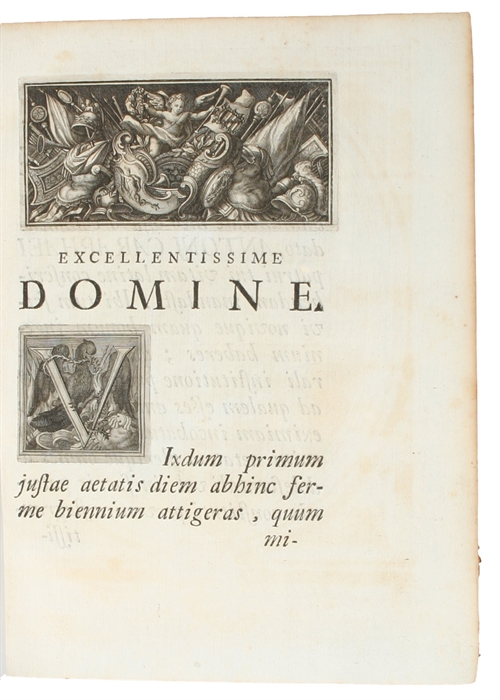 HISTORY AS POLITICS - POLITICS AS HISTORY

The very rare first edition of Vico's intriguing account of the deeds of Antonius Carafa, the historical biography which the highly influential Enlightenment philosopher, historian, and jurist was commissioned to write about the important seventeenth-century statesman. The work is more than a beautifully printed work by a highly influential thinker about an important Italian statesman, though; it is a rich and enlightened reconstruction of many major historical events and aspects of the contemporary history of Vico, mixed with numerous of Vico's personal opinions. As such, the work is of the greatest interest to historians, philosophers, jurists and political historians, as well as anyone interested in early modern European history; it furthermore gives us a unique insight into the thought of a thinker, whose ideas and opinions, both philosophical and political, have greatly influenced the likes of Marx, Hegel, Goethe, etc. The commission of the work is also that which caused Vico to become interested in the question of the law of nations, and that which led him to discover Grotius' "On the Law of War and Peace" (1625), which came to influence him greatly. The biography of Antonio Carafa is the next major work that Vico writes after his magnum opus, the "Scienza Nouva".

"The life of Carafa was a commissioned work, undertaken at the request of Don Adriano Carafa, the nephew of the subject and a former pupil of Vico, and for its composition access to the family archives was given him. It appeared in 1716, in magnificent format, as Vico says "in the Dutch style", and won for its author the praise of Pope Clement XI as well as the friendship of the Italian scholar Gianvincenzo Gravina"." (Camponigri, Time & Idea: The Theory of History in Giambattista Vico, p. 22). Vico later married one of Carafa's daughters, and he has himself said of the work that it was "tempered by honour towards the subject, reverence towards the princes and the just claims of truth." (The Autobiography).

Antonio Carafa (1646-1693) was a Neapolitan statesman and diplomat, who immigrated to Vienna in 1662 to serve the Holy Roman Emperor Leopold I of Habsburg, in whose service he stayed throughout most of his life. Carafa spent years at the Viennese court, familiarizing himself with the intrigues and learning the secrets of the state and the art of governing here. He became a favourite of the emperor and the Habsburg princes (Charles of Lorraine and Maximillian of Bavaria ) and came to serve as a statesman and diplomat of Leopold I in Vienna, Poland and Hungary. He kept rising through the ranks, as his military experience grew, and he was known for his courage, wisdom, strategic skills and political diplomacy. Eventually he rose to the highest rank in the Austrian military and was appointed Military Governor of, first, Upper Hungary, then Transylvania as well as General Commissary of all imperial armies on all fronts, namely the Rhine, Danube, and Po; he was integral in Leopold's wars against the Ottoman Empire. Towards the end of his career, he came to suffer from infamy, according to Vico due to the jealousy of his rivals, and he was dubbed the "butcher of Eperjes"; he was thus sent back to Vienna, where he died shortly after.

The present text by Giambattista Vico (1668-1744) is a historiographical work which sets out to delineate the biography of Antonio Carafa, a statesman much admired by Vico. The work touches on numerous events, in which the important statesman and diplomat was involved, and Vico thus describes in detail, from a contemporary point of view, many highly interesting historical events. These events include THE ALLIANCE'S WAR AGAINST THE TURKS BETWEEN 1683 AND 1694, THE SECOND ENGLISH REVOLUTION OF 1688-1689, THE WAR OF THE AUGSBURG LEAGUE, etc., etc. These events are also valuably commented upon by Vico, for whom they were contemporary and vivid.
For a modernist, the present work possesses a rare source of information on a number of important European events, presented in the most interesting manner, by one of modern Europe's great thinkers, and it is thus probably of greater interest to us today than it ever has been. "In his own time, Vico was relatively unknown, but from the nineteenth century onwards his views found a wider audience and today his influence is widespread in the humanities and social sciences." (SEP). In 2004 the first English translation of the work appeared, bearing witness to the renewed interest in this important and interesting work by one of the leading Enlightenment philosophers.

"Vico's next major work [after the "Scienza Nuova"], "The Life Of Antonio Carafa" (1716), although somewhat of a by-way in the development of his general thought, contains one relevant point. Whereas, in "On the Study Methods of our Time", he had emphasised the importance of wisdom, virtue and eloquence in training the intellectual to guide the masses, in his biography of Carafa he attributes Carafa's success to his natural, rather than acquired, shrewdness and suggests that formal culture is likely to hinder rather than to promote effective action. This was not a view that he was to maintain in its generalised form, but it is indicative of decreasing confidence in the capacity of the intellectual to bring about political well-being by the methods advocated earlier.
At this point it is necessary to turn to the importance of Grotius's influence on Vico, though this is a highly debated matter. Vico may have known something about Grotius's doctrines, probably through discussion, as early as 1708, but as part of his preparation for "The Life of Antonio Carafa", he had undertaken a thorough reading of "The Law of War and Peace"." (Introduction to Vico's "The First New Science" by Leon Pompa, p. XXIII).

First editions by Vico are generally of great scarcity, and the present work is no exception, as it is almost impossible to find.