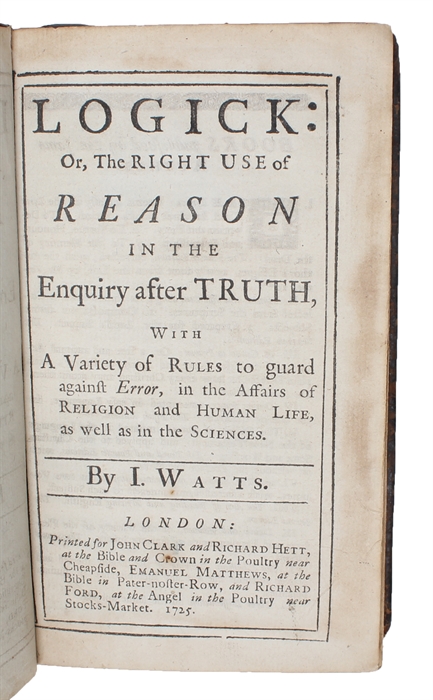 THE STANDARD TEXT BOOK ON LOGIC

Logick: Or, The Right Use of Reason in the Enquiry after Truth, with A Variety of Rules to guard against Error, in the Affairs of Religion and Human Life, as well as the Sciences.

First edition of Watt's standard text book of philosophical logic, which was used as the basic introduction to this field for more than 100 years at Oxford University, also occupying the place as the standard text on logic at Cambridge, Harvard and Yale throughout the 18th century and well into the 19th.

Isaac Watts (1674-1748) is considered the father of English hymnody and is considered one of the most important hymn-writerS ever in Great Britain. But Watts was not only a hymn-writer, he was also a renowned logician and theologian, and today he is primarily famous within these fields as the author of his text book in logic, "Logick..." from 1725, which became hugely popular and served as a standard introduction to the field for more than 100 years. The work went through twenty editions, bearing witness to its great popularity.

The work is arranged systematically and divided into four general parts: 1. Of Perceptions and Ideas, II. Of Judgment and Proposition, III. Of Reason and Syllogism, IV. Of Method. The work not merely served as a basic text book for beginners of logic, though, it also contains new ideas and new approaches to old problems. The influence of Watts' contemporary John Locke is especially noticeable with many references to his "Essay on Humane Understanding". But a thing that distinguishes Watts' Logic from others of the time, and perhaps the reason why it became so hugely popular, is his constant focus on the practicability of logic instead of the merely speculative approach to it, which again made his logic useful in connection with general problems of philosophy and science. Unusual for his time, Watts here distinguishes between the practical and the speculative part of logic and treats of both parts, anticipating later logicians such as Peirce. C.S. Peirce also described Watts' "Logick" as being "far superior to the treatises now used in colleges, being the production of a man distinguished for good sense" (see The Collected Papers of Charles Sanders Peirce, vol.II, 1933).