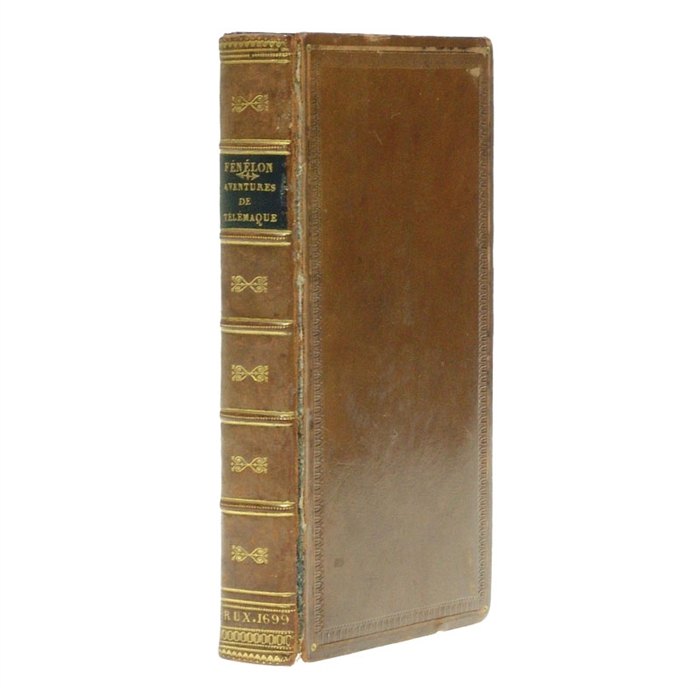 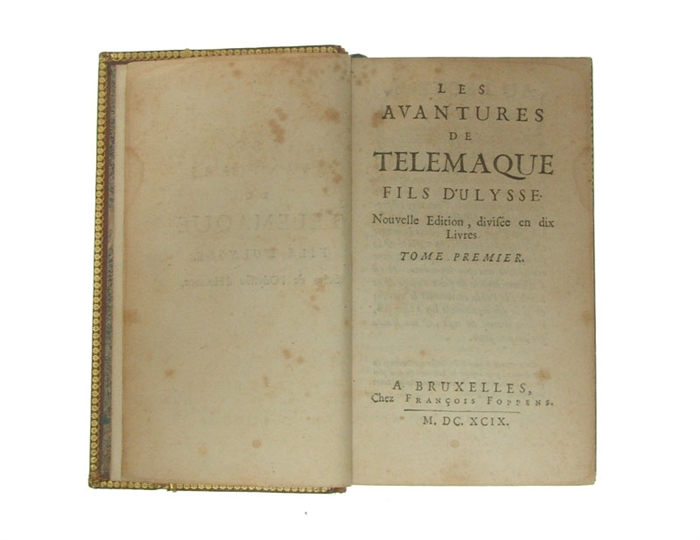 Small 8vo (12mo). Bound in a beautiful later full calf (ca. 1800) w. five raised bands on back. Gilt back and blindstamped ornamental borders on boards. All edges of boards gilt, and gilt borders on inside of boards. Hinges cracked and boards loosening, inner hinges crudely repaired. A bit of brownspotting, but internally a very nice copy.

The very rare Bruxelles-edition, published same year as the first edition (Paris, Barbin).
Fénelon's main work, written when he was a tutor to the Duke of Burgundy in order to hold up Ulysses as an example for the young prince. Fénelon was a leader of the Quetism heresy, and in 1699, the year Télemaque appeared, Pope Innocent XII condemned his writings.
The true first edition of Fénélon's Télemaque appeared in one volume in 1699 under the title "Suite du quatrième livre de l'Odyssée d'Homère, ou les Aventures de Télémaque, fils d'Ulysse", and containing only half of what we consider Télémaque today. According to Brunet, the first edition was suppressed, and Moetjens printed a pirate-edition (called the second edition) in Haag with the same year and date (June), and a bit later the same year, the second part appeared. Several editions appeared the same year, and Brunet mentions one without printer or Place (but Paris), and the Liége- and Bruxelles-editions. "Dans les différentes éditions que nous venons de décrire dans lesquelles il le soit sont celles de LIÉGE, 1699, et de BRUXELLES, FR. FOPPENS, même date, l'une et l'autre impr. en France, en 2 vol. in-12, et en dix livres." (Brunet II:1212). Foppens also printed an edition in Bruxelles 1700, but that is divided into 16 books. All early editions of this work are scarce, and the first edition is almost impossible to get a hold of. This main work of French literature has been printed numerous times after the author's death (1715), and editions printed before his death, are a great rarity. The later editions were corrected and divided into numerous books, not intended in the original manuscript.

"Une autre circonstance allait aggrever la situation de l'archevêque de Cambray. Peu de temps après sa condemnation, parut le livre qui l'a rendu le plus populaire et qui, après la "Bible" et l'"Imitation de Jésus-Christ", est un de ceux qui ont eu plus d'éditions: "Les Aventures de Télémaque". (N.B.G. 17:328). The controversial but highly popular work was, among other things, accused of satirically portraying Louis XIV, and thereby publicly humiliating him, -this was probably not the intention, but there is no doubt that the work was critical towards the reigning regime, and put forth many ideas not previously heard of. In true utopian political manner, Fénélon warns against overgrowth of the metropolis and preaches groundbreaking doctrines like free trade, international arbitration etc. He actually foresees the French Revolution as a result of the flourishing despotism so visible in France at the time. Lamartine (in his "Life of Fénélon") describes the saintly poet as the first Radical and the first communist of his century, though not to his own knowledge, and he directly traces the Utopias which produced the revolutions of 1793 and 1848 to his groundbreaking work, "The Adventures of Telemachus". Especially the part "Voyage en Salente" is considered very important for the study of utopian literature, but the entire work is characterized by the attempt to represent people as they might have behaved and might still be, were they governed by sages and saints and according to the laws of God. The work represents a religious ideal where God is always higher than man; it is greatly political, greatly influenced by the appreciation of ancient Greek life, and is designed to evoke the feeling of honour, responsibility and religion in the young prince.
See Brunet II: 1210-1212. Graesse 2:563-64 (Paris- and La Haye-editions).