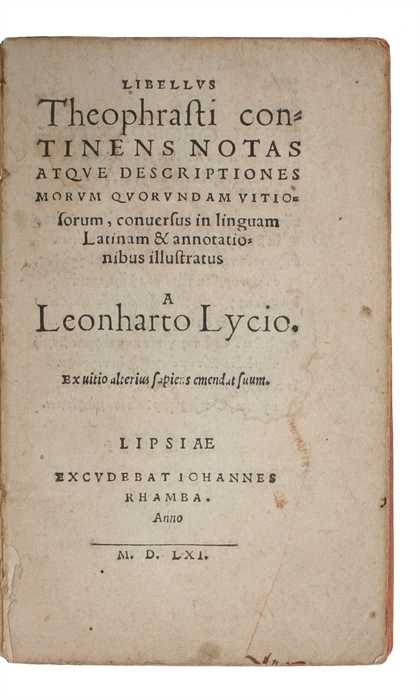 SKETCHING THE CHARACTER OF MAN

Extremely scarce first edition thus, containing all of Theophrastus' 23 characters in Greek and Latin, being the first edition of Auberius' excellent Latin translation and first edition with Lycio's interesting commentaries.

"This very rare edition, which presents us with the Greek text of H. Stephan (Stephanus), contains a new Latin version by Claudius Auberius, who was scarcely twenty years of age when he composed it. The notes are critical and historical; sometimes bold, but always erudite... This version and these notes were republished in Zuinger's edition of Aristotle's "Ethics" at Basil. fol. 1582." (Dibdin II:500).

This version of Theophrastus' milestone work, the first recorded attempt at systematic character writing, became hugely influential and is still referred to in modern editions of the text, as Auberius' translation is regarded as one of the best and most important interpretations of the text. Claude Aubery or Claudius Auberius (ca. 1540-1596) was a noted philosopher and medical doctor, professor of Philosophy in Lausanne. He translated several Greek texts into Latin, but is best remembered for his excellent version of Theophrastus' "Characters", which was highly influential throughout the Renaissance and which was incorporated into later Renaissance Aristotle-editions as the standard-version of Theophrastus' text.

Theophrastus (ca. 371- ca. 287 BC), Aristotle's successor at the Lyceum, and probably the most famous Aristotelian of all times, successfully presided over the Peripatetic School for 36 years and here wrote a number of works. The most famous of them is arguably his great moral opus "The Characters", which continues to amaze readers to this day. It introduced the "character sketch", which became the core of the Character as a genre, and as such it influenced the entire literay tradition of the Western world.

The fabulous, very witty, astute, harsh, and insightful characteristics of type characters of the human race have been formative for our understanding of moral virtues and vices and how they come to be expressed in man, for our understanding of human nature in general. It is no wonder that the work became so popular and widely read during the Renaissance, the era of man as the centre of the universe.