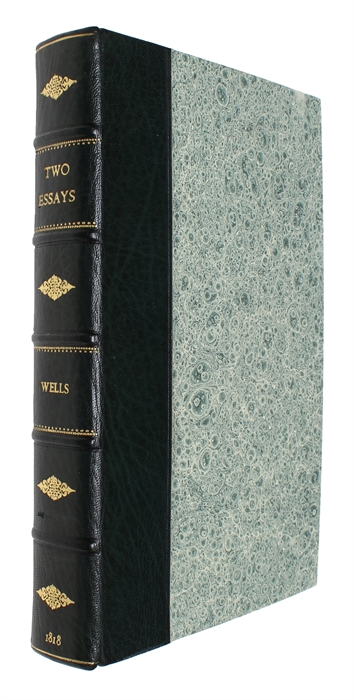 THE FIRST RECOGNIZABLE STATEMENT OF THE THEORY OF NATURAL SELECTION

First appearance of Well's important work, which constitutes the first clear pioneering statement about natural selection. He applied the idea to the origin of different skin colours in human races, but from the context it seems he thought it might be applied more widely. Charles Darwin said: "[Wells] distinctly recognises the principle of natural selection, and this is the first recognition which has been indicated". (Darwin, Charles 1866. The origin of species by means of natural selection. 4th and subsequent editions, in the preliminary 'Historical sketch')

In 1813, Wells read a paper to the Royal Society of London, occasioned by a white female patient with splotches of dark skin. In his paper, Wells speculated about the origin of skin color variations in humans. He suggested that long ago, there might have arisen in equatorial regions a variety of humans that were better able to resist diseases such as malaria, perhaps aided by darker skin, and they survived where other variations perished. Similarly, lighter-skinned humans might have been variations that were better able to survive in temperate and arctic regions.

"Wells' paper was not printed in the Philosophical Transactions, but after he died in 1817, two of his treatises, "On Single vision with Two Eyes," and "On Dew", were published posthumously, and Wells' brief "Account of a white female, part of whose skin resembles that of a negro" was added on at the very end. No one noticed, certainly not Charles Darwin, who was 9 years old at the time.
Time went by, Darwin discovered natural selection on his own in the late 1830s, and he sprang it on the world in On the Origin of Species in 1859. During the year after publication, various readers noticed that certain aspects of Darwinian evolution had been anticipated by such naturalists as Étienne Geoffroy St. Hilaire, Patrick Matthew, and the anonymous author of the Vestiges. So in 1861, for the third edition of the Origin, Darwin added an "Historical Sketch" in which he discussed his precursors and to what extent they anticipated his own work (third image). Geoffroy St. Hilaire, Matthew, and the Vestiges all merited a paragraph in the "Historical Sketch." But there was still no mention of William Wells.
Then, sometime before 1866, an American, Robert Rowley, drew the attention of an Englishman, Charles Loring Brace, to Wells' paper, and Rowley conveyed the information to Darwin. Darwin was apparently impressed. For the fifth edition of the Origin, he revised the "Historical Sketch", and he added a paragraph about Wells, in which he commented: "In this paper he [Wells] distinctly recognises the principle of natural selection, and this is the first recognition which has been indicated." Darwin also pointed out, quite correctly, that Wells used natural selection only to account for human races, not to explain the origin of species. But still, Wells was the only precursor of natural selection that Darwin took seriously."( William B. Ashworth, Linda Hall Library)