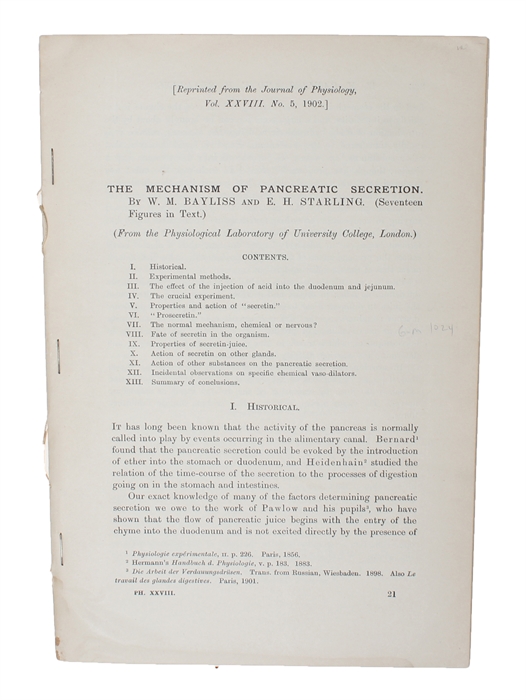 FOUNDING THE SCIENCE OF ENDOCRINOLOGY.

The Mechanism of Pancreatic Secretion. (Seventeen Figures in the Text).

First edition of the scarce offprint of the paper that fully described the discovery of the first hormone, a milestone in the history of physiology and medicine.

The discovery was announced in the Proccedings of the Royal Society in Janauary 1902, on 2 pages. The offered item constitutes the first printing of the paper in full, in which the authors described their milestone discovery, which introduced an entirely new field in physiology and medicine, namely the discovery of the FIRST HORMONE, which they named "Secretin". A few years later Sterling coined the word 'hormone' (1905) from the Greek 'hormon', meaning to exite or set into motion.

Up until Baylis' and Starlings' discovery, it was thought that the glands, here specifically the pancreas, were controlled by the nerves (e.g. Pavlov and others), but Bayliss and Sterling discovered that the intestine was in fact signaling the pancreas, thereby presenting a COMPLETELY NEW MECHANISM involving a new kind of body or substance functioning as a chemical messenger. "If nerves are the sprinters of biology, Bayliss & Starling had discovered the marathon runners. In doing so, they also founded the science of hormones, called endocrinology" (Alan Lightman "The Discoveries", p. 34 ff).

"With the discovery of hormones, Bayliss & Starling had found the internal command and control centers - and in this, their discovery was much larger than a new communication system. The mechanism of response and control was chemical: atoms and molecules. Now, with hormones, there was a mechanism for a living thing to regulate itself. Furthermore, with hormones, an organism could not only be studied, but also controlled from the outside... Never had the living body come closer to a machine, a self-regulating machine governed not only by physics, but also by chemistry. And not only a machine, but a machine that we humans could willfully control. At the start of the new century, we still have not come to terms with the implications of this idea." (Alan Lightman).