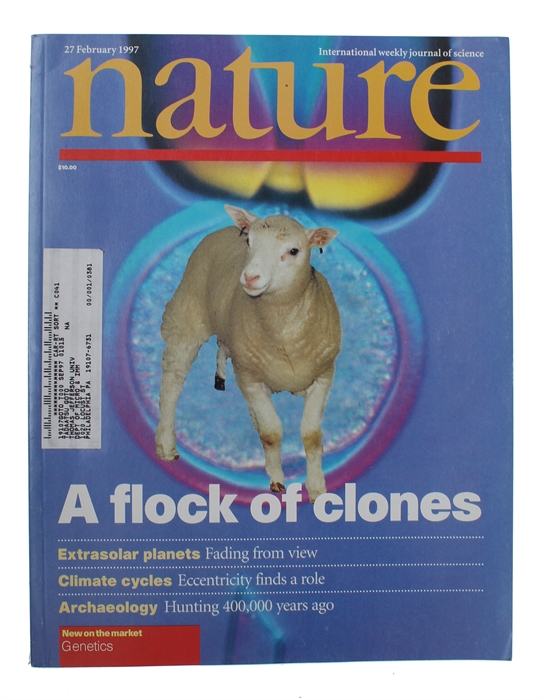 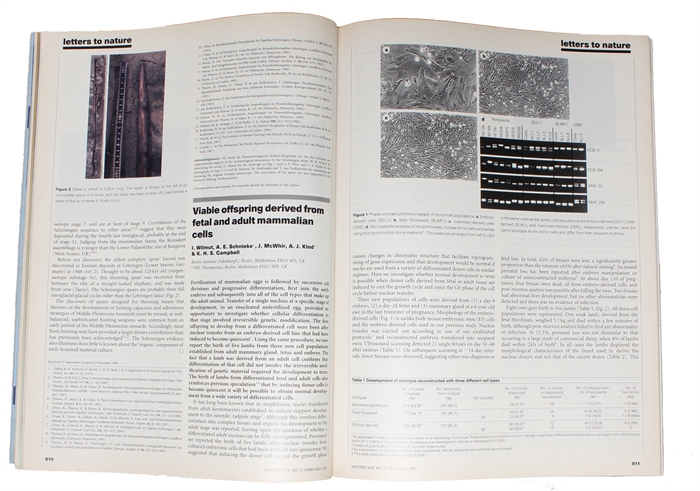 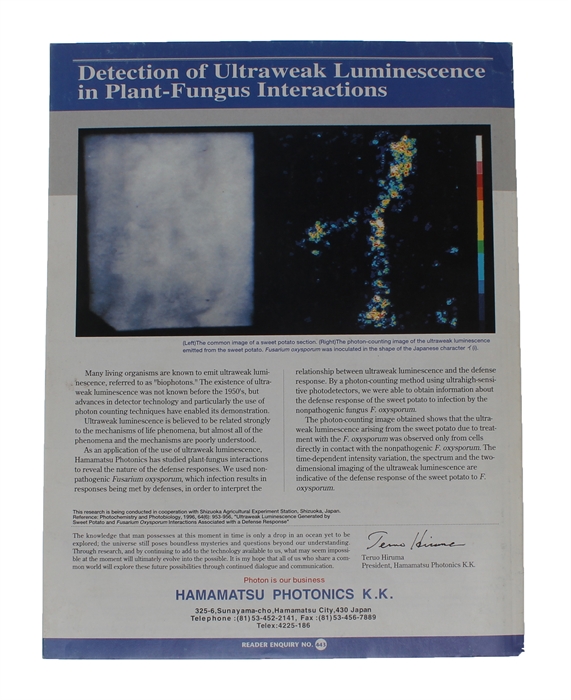 DOLLY, THE WORLD'S MOST FAMOUS CLONE

Small folio. Entire volume of no. 6619 of Nature, in the original illustrated wrappers, with the cloned sheep Dolly on the front wrapper. Very minor signs of wear to corners and capitals. Original label with address of original buyer to front wrapper. An excellent, clean and fresh copy. Pp. 810-13. [Entire volume: 753-844, 44 pp. (Classified) + 3 subscription-leaves]. Richly illustrated.

The scarce volume of Nature, in which the completey groundbreaking article on Dolly the sheep, the first mammal in history successfully cloned fron an adult body cell, appears for the first time. This seminal paper constitutes a milestone in the history of genetics, a spectacular scientific breakthrough, which not only provided the modern world with a wealth of new medical advances and sparked a revolution in our understanding of mammal reproduction, ageing, genetics in general, etc., but also raised a storm of ethical questions, pushing our boundaries of man's abilities to play God.

"Dolly was an important milestone, inspiring scientists to continue improving cloning technology as well as to pursue new concepts in stem cell research. The endgame was never meant to be armies of genetically identical livestock: Rather, researchers continue to refine the techniques and combine them with other methods to turbocharge traditional animal breeding methods as well as gain insights into aging and disease." (George Seidel, in The Conversation).

"[I]n February 1997, Ian (now Sir Ian) Wilmut and his research team at the Roslin Institute announced Dolly’s birth in the prestigious science journal "Nature". This provoked political and ethical debates that have never truly stopped... issues relating to cloning technology remain crucial to debates over biomedical research and its regulation.

The announcement - with a description of the method used to bring Dolly into existence - triggered a feverish worldwide response because of the possible implications for human cloning. It was immediately obvious that SCNT could, in principle, be used to create human babies. Across the world, many countries banned human cloning - often with significant punishments, such as lengthy jail terms, even for attempting such a thing." (Russell Blackford in The Coversation)

Dolly is now the symbol of modern medical technology, of our exitement with mankind's ability to create specific kinds of life as well as the symol of the fear of a "brave new world".

"It’s been 20 years since scientists in Scotland told the world about Dolly the sheep, the first mammal successfully cloned from an adult body cell. What was special about Dolly is that her "parents" were actually a single cell originating from mammary tissue of an adult ewe. Dolly was an exact genetic copy of that sheep - a clone." (George Seidel, in The Conversation).

"Before the decades of experiments that led to Dolly, it was thought that normal animals could be produced only by fertilization of an egg by a sperm. That's how things naturally work. These germ cells are the only ones in the body that have their genetic material all jumbled up and in half the quantity of every other kind of cell. That way when these so-called haploid cells come together at fertilization, they produce one cell with the full complement of DNA. Joined together, the cell is termed diploid, for twice, or double. Two halves make a whole.
...
In contrast, Dolly was produced by what's called somatic cell nuclear transfer. In this process, researchers remove the genetic material from an egg and replace it with the nucleus of some other body cell. The resulting egg becomes a factory to produce an embryo that develops into an offspring. No sperm is in the picture; instead of half the genetic material coming from a sperm and half from an egg, it all comes from a single cell. It's diploid from the start.
...
To date, the most valuable contribution of these somatic cell nuclear transplantation experiments has been the scientific information and insights gained. They’ve enhanced our understanding of normal and abnormal embryonic development, including aspects of aging, and more. This information is already helping reduce birth defects, improve methods of circumventing infertility, develop tools to fight certain cancers and even decrease some of the negative consequences of aging - in livestock and even in people. Two decades since Dolly, important applications are still evolving." (George Seidel, in The Conversation).