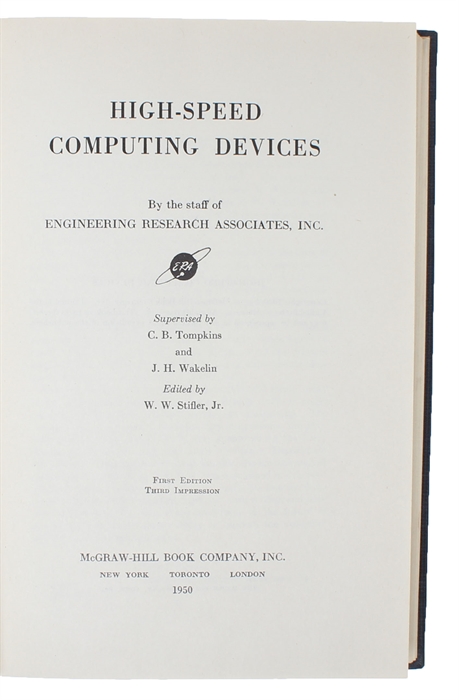 "THE FIRST GENUINE TEXTBOOK ON COMPUTING TECHNIQUES AND COMPUTER HARDWARE"

8vo. In the original full cloth with the original dust-jacket. Dust-jacket with light miscolouring to spine and and a tear to capitals. Small tear to upper part of the back to dust-jacket. A very fine and clean copy. XIII, (1), 451 pp.

First edition in the rare original dust-jacket of the first textbook on digital computers. It constitutes "the first genuine textbook on computing techniques and computer hardware, was a pioneering book that influenced both American and foreign computer developments." (Tomash-Erwin E14). "The first treatise on how to build an electronic digital computer" (OOC)

"High-Speed Computing Devices was written to satisfy a perceived need, following the end of World War II, for a compendium of technologies applicable to the emerging field of the electronic digital computer. Because published technical information was scarce in the US, there can be little question that the book was an important contribution to the computer literature of the 1950s. For today's student of computer history, whether a professional historian or a history buff, the book, with its state-of-the-art picture of the period 1947 through 1949, establishes a well-documented baseline for tracking and evaluating subsequent technological progress" (A.A. Cohen, "Introduction", Charles Babbage Institute Reprint Series Edition of the ERA Report, 1983).

"It provides the best picture of the state of the industry in its infancy. Ostensibly written as a report to the Office of Naval Research, the work was really undertaken on behalf of the Naval cryptographic establishment. Engineering Research Associates, ERA, was a group formed primarily from demobilized World War II naval cryptographers. It presents a discussion of the mechanical and electrical (both analog and digital) devices that could be usefully incorporated into computing machines. Although it does not survey the computer projects then underway, it does occasionally discuss individual machines in the context of integrating devices into complete systems. Engineering Research Associates (ERA) later became a division of Remington Rand and then of Sperry Rand." (Tomash-Erwin E14)