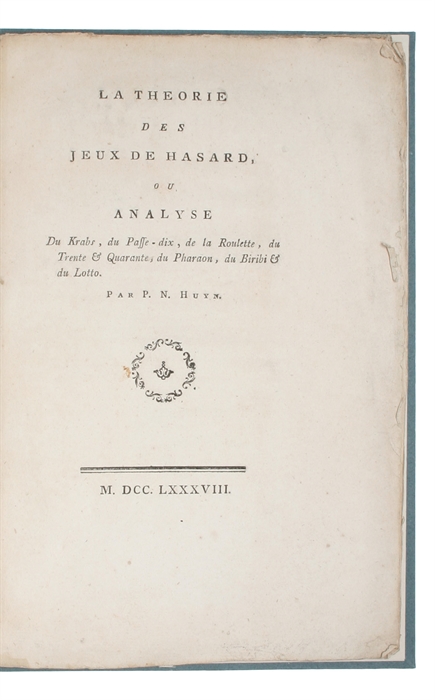 [No place], 1788. 8vo. Bound in a recent full blue paper binding w. paper title-label to front board. Uncut. A bit of minor soiling to title-page, otherwise nice and clean. 51 pp.

The scarce first edition of this interesting book on games of chance and the theory of probability connected thereto.

Huyn's profound study of the possible series and combinations within the mentioned games of cards, roulette, lotto, and various other chance- or hazard-games, is based on mathematical theories of statistics. Among other things Huyn, in the present work, shows that it is impossible to win in uneven games and that all attempts to speculate in these are wrong and prove to be false. As such, "La Théorie de hazard" provides us with an important early contribution to the analysis of chance games and a valuable work of very practical probability theory.

The present work stands at the midst of a new scientific approach to games of hazard, which also directly influenced the art and manners of trick-games and tricksters.
Apart from the mathematical approach to the subject, Huyn also thoroughly explains the rules of the games and even has observations on the moral aspect of them.

The work is very rare and is only found in few copies in libraries world-wide, e.g. only two copies on OCLC.

Another edition of the book appeared in 1803, printed in Amsterdam.