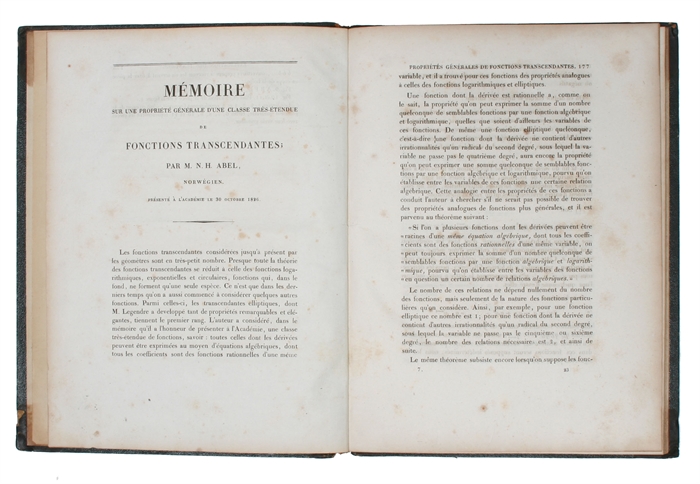 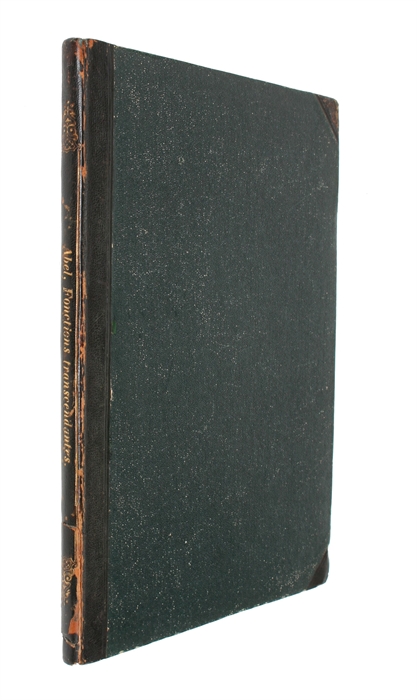 Very scarce first edition of Abel's main paper, in which he first presented his theorem for elliptic integrals - Abel's theorem. "After studying at Christiania and Copenhagen, Abel received a scholarship that permitted him to travel. In Paris he was presented to Legendre, Laplace, Cauchy, and Lacroix, but they ignored him. ... Abel knew the work of Euler, Lagrange, and Legendre on elliptic integrals and may have gotten suggestions for the work he undertook from remarks made by Gauss, especially in his 'Disquisitiones Arithmeticae'. He himself started to write papers in 1825. He presented his major paper on integrals to the Academy of Sciences in Paris on October 30, 1926, for publication in its journal. This paper, [the offered item], contained Abel's great theorem. Fourier, the secretary of the Academy at the time, read the introduction to the paper and then referred the paper to Legendre and Cauchy for evaluation, the latter being chiefly responsible. The paper was long and difficult, only because it contained many new ideas. Cauchy laid it aside to favor his own work. Legendre forgot about it. After Abel's death, when his fame was established, the Academy searched for the paper, found it, and published it in 1841. ... Because Abel's main paper of 1826 was not published until 1841, other authors, learning the more limited theorems published in between these dates, obtained independently many of Abel's 1826 results." (Kline: Mathematical Thought from Ancient to Modern Times, pp.644-55). Sotheran: Bibliotheca Chemico-Mathematics, Third Supplement, describes this paper as "very scarce".