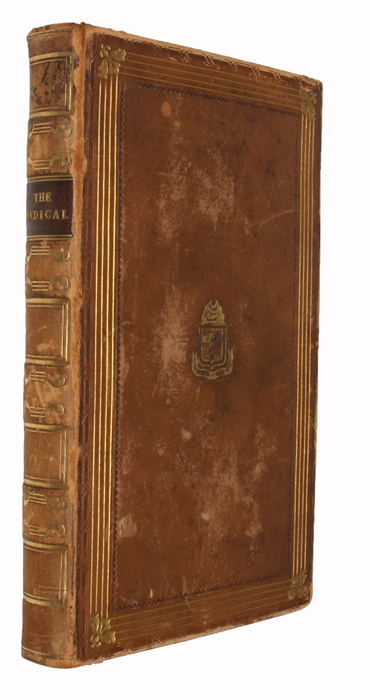 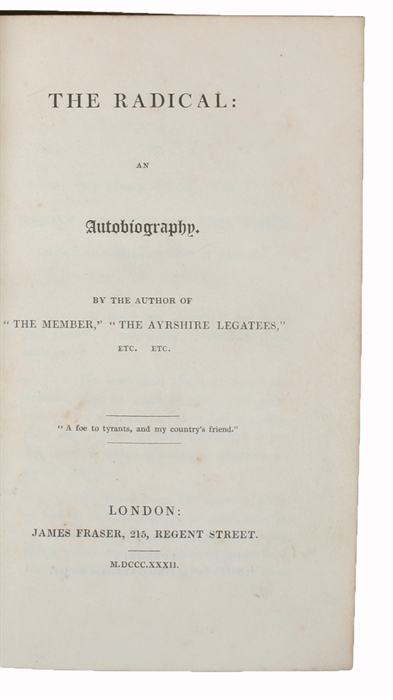 WHO IS JOHN GALT?

The Radical: An Autobiography. By the Author of "The Member, "The Ayrshire Legatees", etc. etc.

The scarce first edition of one of the main works of John Galt, the first political novelist in the English language.

Althought the name "Gohn Galt" is now primarily associated with the main character of Ayn Rand's modern political classic "Atlas Shrugged", the "real" John Galt (1779-1839) was one of the best known Scottish political and social novelists of the 19th century. Like Rand's John Galt, he too was an entrepeneur, greatly active in political and social issues. Because he was the first novelist to deal with issues of the industrial revolution, he has been called the first political novelist in the English language.

"The Radical" is a study of religion, politics and law in the local boroughs of Scotland during the transitional late eighteenth and early nineteenth centuries. As several of his other novels, it is concerned with the effects of change upon communities and upon the social institutions that shape those communities. The work is famous for its, prosaic studies, that are, however, far from dry, and Galt’s storytelling is known to be characterised by wit and humour.

Together "The Radical" and "The Member" (also 1832) make up what John Galt himself calls "the Reform", as he states in his autobiography, "they serve to illustrate, by the by, the sagicity of the trade, for they are thought to have too much a seeming of truth, and the sale of them has not been satisfactory. [...]
The Radical [...] is deduced from principles and feelings coeval with human nature. It seems to me that the Radicals of our time forget that we are living in society for the benefitsof which we have surrendered a portion of our natural rights. The work in consequence turns on supposing, that what our natural feelings prompt must therefore be what we are entitled to do and to enjoy, forgetting altogether how much the social ties restrain the exercise of natural rights.
But although some of my friends think the two works clever and philosophical, and although, on the Continent they have attracted more attantion than any other product of my pen, they have almost been still-born here. [...]." (John Galt, The Literary Life and Miscellanies of John Galt, 1834, pp. 318-19).

John Galt was born in Irvine as the son of a sea captain who traded with the West Indies. In 1789 the family moved to Greenock and much of Galt’s fiction draws from the localities of the west coast of Scotland where he spent his youth.
John Galt was possessed of a pragmatic as well as an imaginative turn of mind. He had a keen interest in business and politics and always maintained that he regarded writing as a secondary profession. From 1796 - 1804 Galt worked as a junior justice clerk in Greenock before setting off for London on a sudden impulse of restless ambition. Here he studied political economy and commercial history and practise but failed to really make his mark on the business world despite several promising ventures.
Around the age of twenty-four Galt began writing. He experimented in verse but was an inferior poet. Several of his essays, however, were published and this writing at this time demonstrates his early interest in politics and the colonies, particularly Canada which had long captured his imagination.
In 1809 Galt spent a period of time travelling on the Mediterranean and it was here that he made his acquaintance with Lord Byron who was to become the subject of his acclaimed biography The Life of Byron in 1830. In 1811 he returned to London, his commercial aspirations disappointed and turned to journalism as a means of making money. At 34, he married the daughter of his literary patron, Alexander Tilloch. It was at this time too that Galt gained his experience of the workings of Parliament as a lobbyist for the Edinburgh-Glasgow canal. These experiences were to be formative in Galt’s later political career in Canada and were also to inform his later political novels, The Radical and The Member.
Despite critical and commercial success, Galt had not abandoned his business aspirations. In 1824 Galt became actively involved in political campaigning on behalf of the Canadian colony and two years later left for Canada leaving the manuscript for The Last of the Lairds with his publisher. During the years 1827-29 Galt developed the virgin territories of the Canadian colony and founded the townships of Guelph and Goderich. For Galt, the Canadian project was the realisation of his most profound ambitions. But he was to fall foul of colonial bureaucracy and was eventually forced to return to Britain in 1829 under charges of debt and placed in prison.
Having returned to Britain, John Galt began writing again, and in 1832 he produced two of his most famous works, "The Radical" and "The Member", for which he is primarily remembered today.