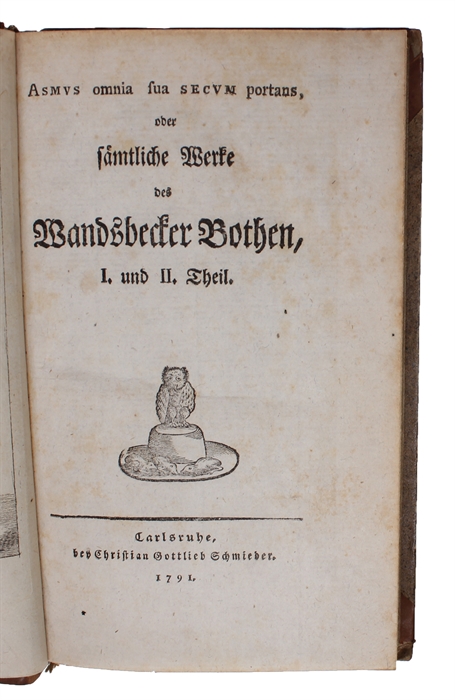 Matthias Claudius (1740-1815) was a German poet, who is now mostly known for his "Wandsbecker Bothe", the famous newspaper that between 1771 and 1775 appeared as the first popular periodical to also contain stories and articles presented for a wider audience belonging to different educational levels.

Claudius had studied theology and political science and later became the private secretary of Count Ulrich Adolph. The Count sent him to Copenhagen, where he stayed for a number of years and made the acquaintance of Friedrich Gottlieb Klopstock, who stimulated his literary longings. From 1768 he worked as an editor for Klopstock's brother in Hamburg, where he met Herder and Lessing, two of the most influential thinkers of the time.

In 1771 he went on to Wandsbek, where he came to edit the newspaper of commerce, "Der Wandsbecker Bothe", which had been initiated by Schimmelman. It is under the editorship of Claudius that the paper becomes famous all over Germany, and it is he, who turns it into the first popular newspaper of the country. The paper only ran from 1771 till 1775, and after that Claudius published his own writings under the name of "Der Wandsbecker Bote" and the pseudonym "Asmus".

This is a beautifully printed and illustrated work that contains many famous pieces.