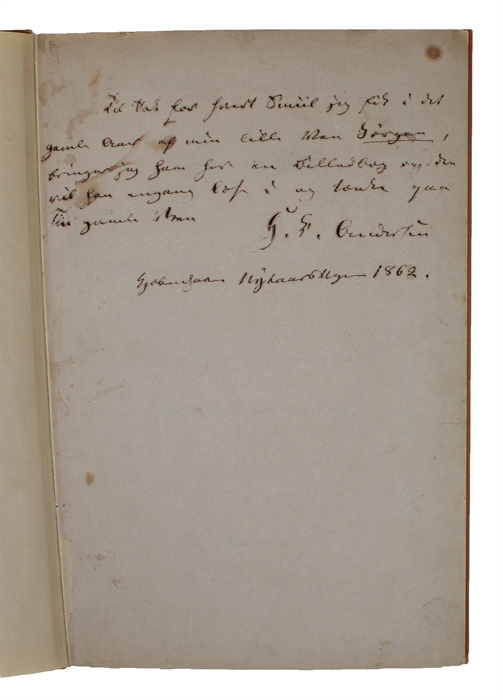 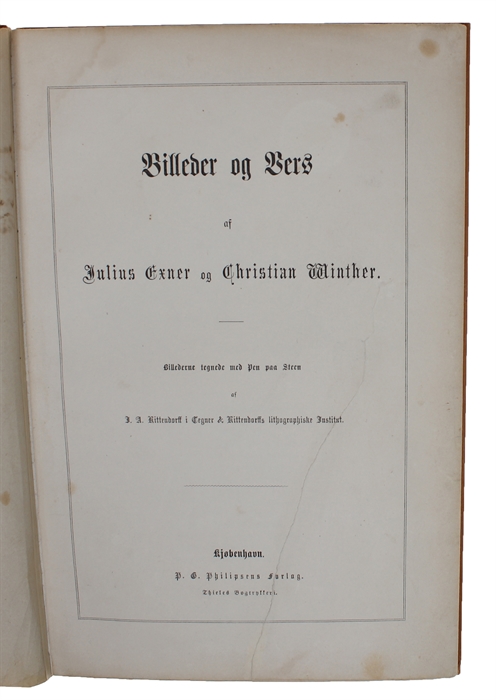 A beautiful copy of Julius Exner's and Christian Winther's "Billeder og Vers" with a charming dated gift inscription from H. C. Andersen to a young boy, Jørgen: "Til Tak for hvert Smiil jeg fik i det / gamle Aar af min lille Ven Jørgen, / bringer jeg ham her en Billedbog og den / vil han engang læse i og tænke paa / sin gamle Ven / H. C. Andersen / Kjøbenhavn Nytaars Ugen 1862." (Translation: As thank for every smile I recieved in the old year from my small friend Jørgen, I bring him here a picture-book and in this he will in due time read and think of his old friend H. C. Andersen. Copenhagen new-year week 1862).

Julius Exner (1825-1910) was a Danish painter known for his romantic paintings of the life of the peasants.

Christian Winther (1796-1876) was one of the greatest Danish poets of the 19th century. Winther is best known for his poem "Hjortens Flugt" which is considered to be one of the classics of Danish literature.

The inscription is written to Jørgen Hansen Koch (1861-1935). Jørgen, who was only 1 year old at the time the inscription was written, later became president of the Maritime and Commercial Court and Det Classenske Fideicommis. Jørgen and his family had a close relationship with H. C. Andersen and they are mentioned frequently in his diaries.

H. C. Andersen wrote in his diary that he visited the Koch family January 2 1862. It was presumably during that visit that he gave Jørgen this copy.

Works of other authors inscribed by H. C. Andersen are very rare.