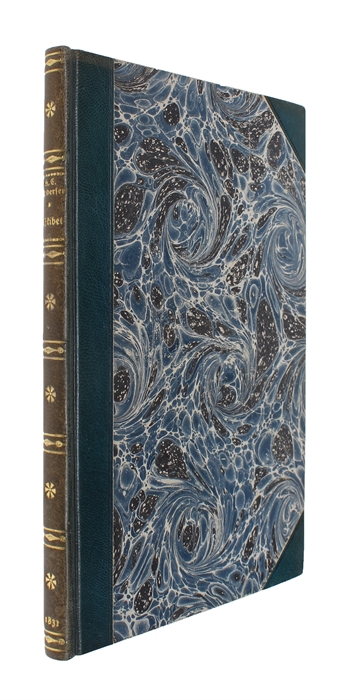 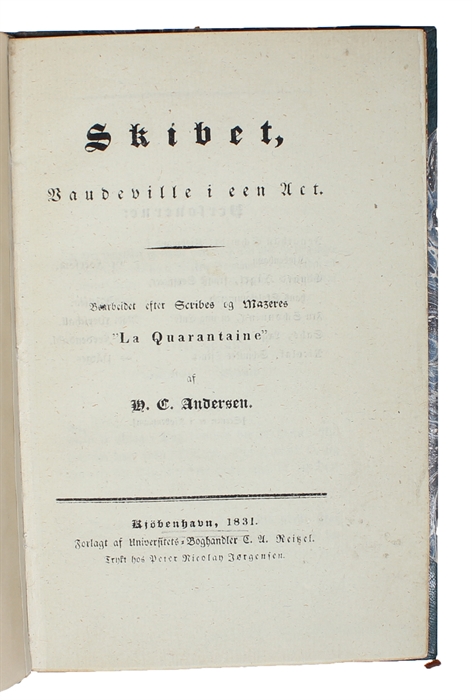 ONE OF THE SCARCEST ANDERSEN-TITLES

Exceedingly scarce first edition of Andersen's second theatre-performed piece. The work is extremely rare and almost never turns up in the trade. Apart from his debut book, "Ungdoms-Forsøg"/"Palnatokes Grav", this is presumably the scarcest Andersen-title.

Hans Christian Andersen inaugurated his dramatical production with "Kjærlighed paa Nicolai Taarn" in 1829, a genre that came to mean a lot to him, and for which he continued producing plays for forty years, amounting to about as many plays. The question as to acceptance from the theatre and the the set-up of the plays, however, -especially at the beginning of his career - would often postpone the actual theatre debut by many months, sometimes years. And thus, although Andersen had translated/ re-written two other plays for the stage, before he re-wrote "Skibet" ("The Ship"), after Scribe and Mazere's "La Quarantaine", "Skibet" came to be the very first re-worked play by Andersen that was performed at the theatre and only the second play at all, following his own "Kjærlighed paa Nicolai Taarn".

Together with "Kjærlighed paa Nicolai Taarn", "Skibet" constitutes his dramatical/theatre-debut and was of immense importance to him. After "Skibet", he continued to re-write foreign pieces for the stage and gained more and more success in this endeavour.