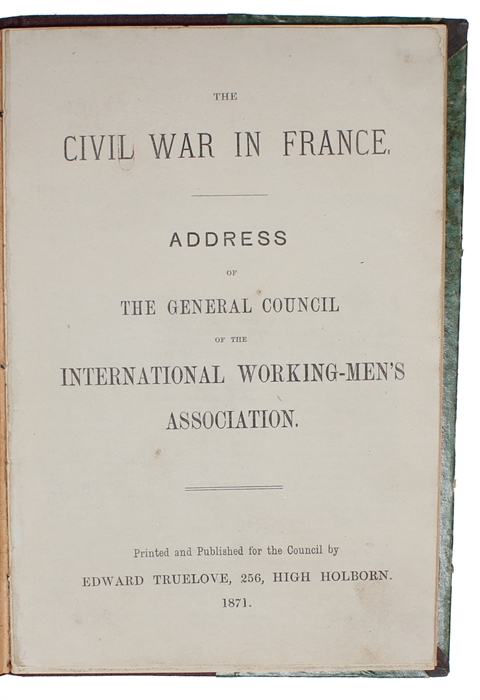 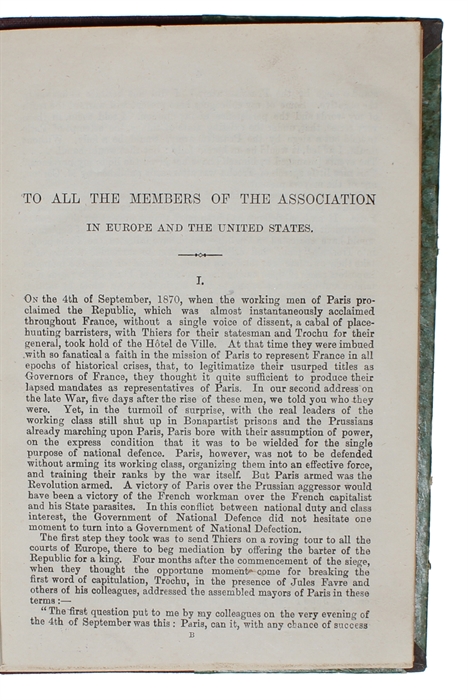 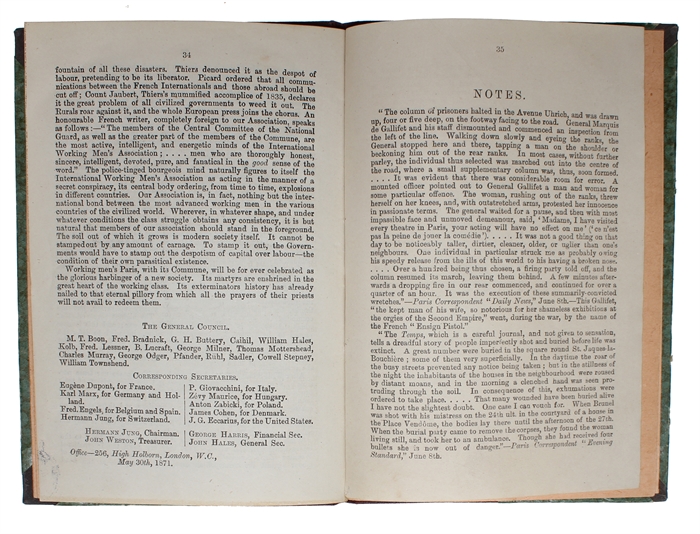 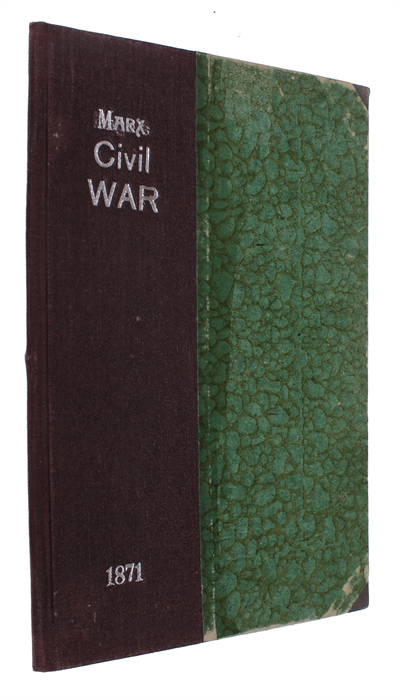 The Civil War in France. Address of the Gerenal Council of the International Working-Men's Association.

High Holborn, for the Council by Edward Truelove, 1871.

Small 8vo. Near contemporary quarter cloth with silver lettering to front board. Binding with signs of use, but overall good. One closed marginal tear and title-page with a few brownspots, otherwise very nice and clean. 35 pp.

Exceedingly rare first edition (with the names of Lucraft and Odger still present under "The General Council") of one of Marx' most important works, his seminal defense of the Paris Commune and exposition of the struggle of the Communards, written for all proletarians of the world.

While living in London, Marx had joined the International Working Men's Association in 1864 - "a society founded largely by members of Britain's growing trade unions and designed to foster international working class solidarity and mutual assistance. Marx accepted the International's invitation to represent Germany and became the most active member of its governing General Council, which met every Tuesday evening, first at 18 Greek Street in Soho and later in Holborn. In this role, Marx had his first sustained contact with the British working class and wrote some of his most memorable works, notably "The Civil War in France". A polemical response to the destruction of the Paris Commune by the French government in 1871, it brought Marx notoriety in London as 'the red terror doctor', a reputation that helped ensure the rejection of his application for British citizenship several years later. Despite his considerable influence within the International, it was never ideologically homogenous... (homas C. Jones: "Karl Marx' London").

The work was highly controversial, but extremely influential. Even though most of the Council members of the International sanctioned the Address, it caused a rift internally, and some of the English members of the General Council were enraged to be seen to endorse it. Thus, for the second printing of the work, the names of Lucraft and Odger, who had now withdrawn from the Council, were removed from the list of members of "The General Council" at the end of the pamphlet.

"[Marx] defended the Commune in a bitterly eloquent pamphlet, "The Civil War in France", whose immediate effect was further to identify the International with the Commune, by then in such wide disrepute that some of the English members of the General Council refused to endorse it." (Saul K. Padover, preface to Vol. II of the Karl Marx Library, pp. XLVII-XLVIII).

"Written by Karl Marx as an address to the General Council of the International, with the aim of distributing to workers of all countries a clear understanding of the character and world-wide significance of the heroic struggle of the Communards and their historical experience to learn from. The book was widely circulated by 1872 it was translated into several languages and published throughout Europe and the United States." (The Karl Marx Archive)

Marx concluded "The Civil War in France" with these impassioned words, which were to resound with workers all over the world: "Working men's Paris, with its Commune, will be forever celebrated as the glorious harbinger of a new society. Its martyrs are enshrined in the great heart of the working class. Its exterminators history has already nailed to that eternal pillory from which all the prayers of their priests will not avail to redeem them."

The address, which was delivered on May 30, 1871, two days after the defeat of the Paris Commune, was to have an astounding effect on working men all over the world and on the organization of power of the proletarians. It appeared in three editions in 1871, was almost immediately translated into numerous languages and is now considered one of the most important works that Marx ever wrote.

" "The Civil War in France", one of Marx's most important works, was written as an address by the General Council of the International to all Association members in Europe and the United States.

From the earliest days of the Paris Commune Marx made a point of collecting and studying all available information about its activities. He made clippings from all available French, English and German newspapers of the time. Newspapers from Paris reached London with great difficulty. Marx had at his disposal only individual issues of Paris newspapers that supported the Commune. He had to use English and French bourgeois newspapers published in London, including ones of Bonapartist leanings, but succeeded in giving an objective picture of the developments in Paris. ...

Marx also drew valuable information from the letters of active participants and prominent figures of the Paris Commune, such as Leo Frankel, Eugene Varlin, Auguste Serraillier, Yelisaveta Tornanovskaya, as well as from the letters of Paul Lafargue, Pyotr Lavrov and others.

Originally he intended to write an address to the workers of Paris, as he declared at the meeting of the General Council on March 28, 1871. His motion was unanimously approved. The further developments in Paris led him, however, to the conclusion that an appeal should be addressed to proletarians of the world. At the General Council meeting on April 18, Marx suggested to issue "an address to the International generally about the general tendency of the struggle."

Marx was entrusted with drafting the address. He started his work after April 18 and continued throughout May. Originally he wrote the First and Second drafts of "The Civil War in France" as preparatory variants for the work, and then set about making up the final text of the address.

He did most of the work on the First and Second drafts and the final version roughly between May 6 and 30. On May 30, 1871, two days after the last barricade had fallen in Paris, the General Council unanimously approved the text of "The Civil War in France", which Marx had read out.

"The Civil War in France" was first published in London on about June 13, 1871 in English, as a pamphlet of 35 pages in 1,000 copies. Since the first edition quickly sold out, the second English edition of 2,000 copies was published at a lower price, for sale to workers. In this edition [i.e., MECW], Marx corrected some of the misprints occurring in the first edition, and the section "Notes" was supplemented with another document. Changes were made in the list of General Council members who signed the Address: the names of Lucraft and Odger were deleted, as they had expressed disagreement with the Address in the bourgeois press and had withdrawn from the General Council, and the names of the new members of the General Council were added. In August 1871, the third English edition of "The Civil War in France" came out, in which Marx eliminated the inaccuracies of the previous editions.

In 1871-72, "The Civil War" in France was translated into French, German, Russian, Italian, Spanish, Dutch, Flemish, Serbo-Croat, Danish and Polish, and published in the periodical press and as separate pamphlets in various European countries and the USA. It was repeatedly published in subsequent years.
...
In 1891, when preparing a jubilee German edition of "The Civil War in France" to mark the 20th anniversary of the Paris Commune, Engels once again edited the text of his translation. He also wrote an introduction to this edition, emphasising the historical significance of the experience of the Paris Commune, and its theoretical generalisation by Marx in "The Civil War in France", and also giving additional information on the activities of the Communards from among the Blanquists and Proudhonists. Engels included in this edition the First and Second addresses of the General Council of the International Working Men's Association on the Franco-Prussian war, which were published in subsequent editions in different languages also together with "The Civil War France". (Notes on the Publication of "The Civil War in France" from MECW Volume 22).

Only very few copies of the book from 1871 on OCLC are not explicitly stated to be 2nd or 3rd editions, and we have not been able to find a single copy for sale at auctions within the last 50 years.