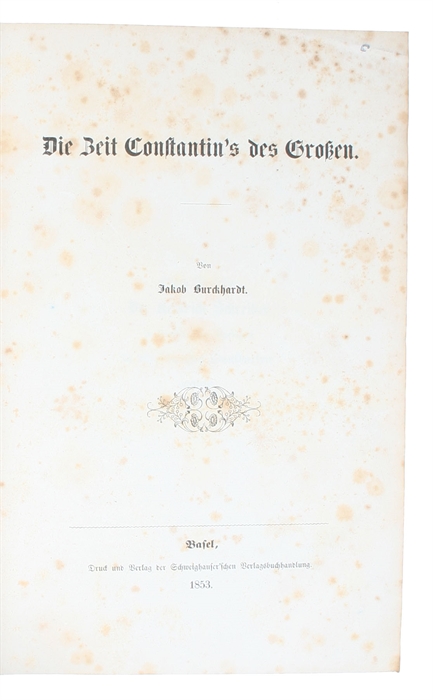 First edition of the first publication of any of Burckhardt's books, his fist major publication, the important and influential "The Age of ConstantinE the Great".

Burckhardt's "The Age of Constantine the Great" was the first work to describe an "Age of Constantine". It was also the first work of a series of cultural histories that Burckhardt had planned. The series was supposed to begin with the age of Pericles and end with that of Raphael, and that of Constantine became the first to appear. The work founded the basic structure of his other later cultural histories, namely representing what he considered the three great powers: state, religion and culture. Burckhardt eminently describes transitional periods and periods of crises, and this work deals with the transition from late pagan Antiquity to early Christian Middle Ages.

The age of Constantine is here considered as the necessary transition from Antiquity to the Christian era and as such it is also understood as the basis of the culture of the Middle Ages. In opposition to the historians of his time, Burckhardt portrayed the Emperor Constantine negatively, as a calculating politician only concerned with preserving his own power, whose turn toward Christianity was purely speculative and driven by politics. He is thus portrayed as wholly unreligious and as having the sole goal of dominion.

The work and the portrayal of Constantine caused the greatest controversies within religious and historical circles. The work became hugely influential and many later historians were inspired by both the controversial portrayal of Constantine, which they applied to other historical figures as well, as well as of Burckhardt's theories of the transition between the two eras.

The Swiss historian of art and culture, Jacob Chrisoph Burckhardt (1818-1897), contributed seminally to the historiography of these two fields. He is considered the discoverer of the Renaissance, and with his later main work, "Die Cultur der Renaissance in Italien", he founded the study of thirteenth- to fifteenth-century Italy and thereby the historical study of the Renaissance, the society of which he dealt with all aspects of. In general, Burckhardt's works all constitute an original historical approach to the study of art, culture, social institutions etc.

As a highly respected scholar of Greek civilization, Burckhardt, with his original historiographical approach, was highly admired by Nietzsche, who also attended his lectures. The two kept in contact and corresponded frequently. Like Nietzsche, Burckhardt was a great admirer of Schopenhauer, and he greatly opposed the Hegelian interpretations of history.

"Outstanding among his (Burckhardt's) writings are, besides the books on Italian art and civilization, "The Age of Constantine the Great", 1853, in which he reinterpreted Gibbon, and the two posthumously published books..." (PMM, p. 210).