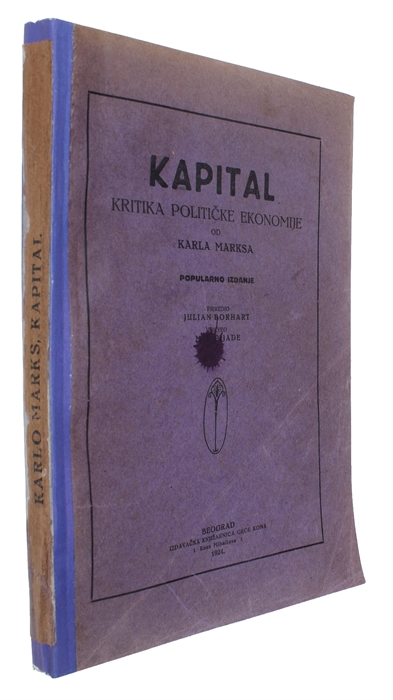 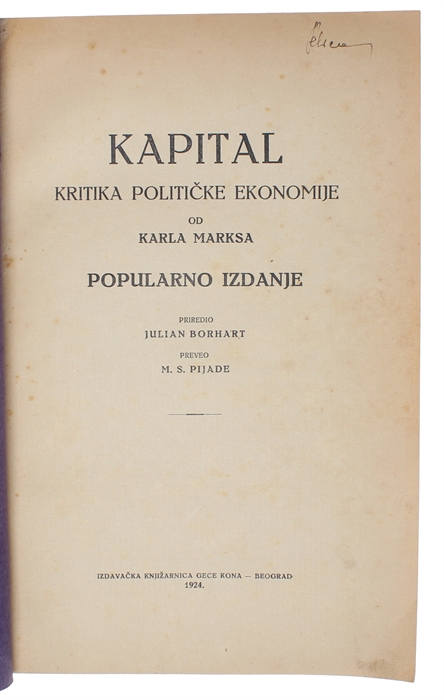 Rare first Serbian translation of Marx's Das Kapital. Translator Mosa Pijade, a Serbian Sephardic Jew, were sentenced 20 years of prison in 1925 because of 'revolutionary activities', partly because of making the present translation. In prison he meet Josip Broz-Tito and Pijade became Tito s right hand, one of the leaders of Tito s Partisans during WWII and after the war the President of the Yugoslavian Parliament.

During WWII Pijade became one of the leaders of Tito s partisans and after the war the President of the Yugoslavian Parliament between 1954 and 1955. In 1948, Pijade convinced Tito to allow the Yugoslav Jews to immigrate to Israel. The book was issued by Geca Kon (Géza Kohn), a Jewish publisher, born in Hungary, who owned the biggest publishing house in Yugoslavia, operating from 1901 until the occupation by Germany in 1941. After the Germans marched into Belgrade, Kon was arrested and shot. Most of his family, who were also active in the business, were taken to a concentration camp in Vojvodina and shot in the same year.