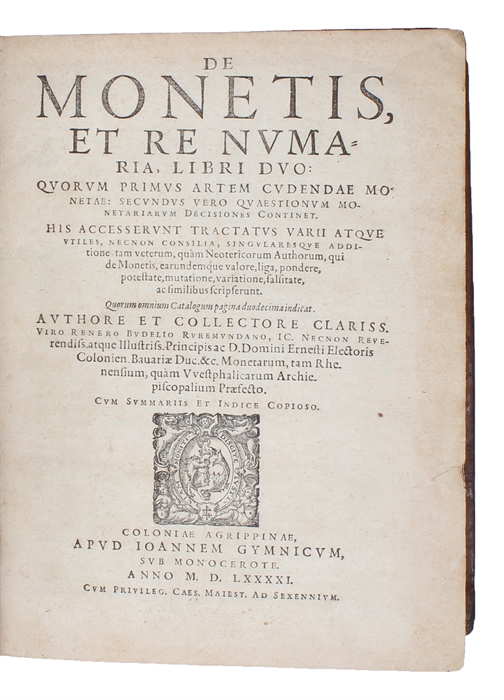 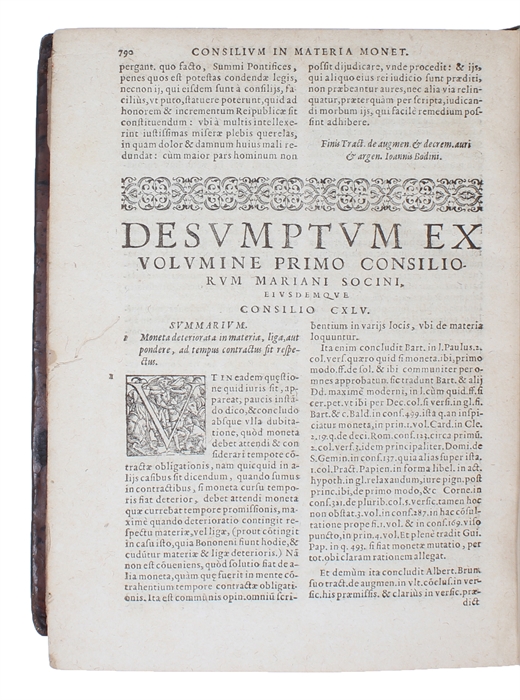 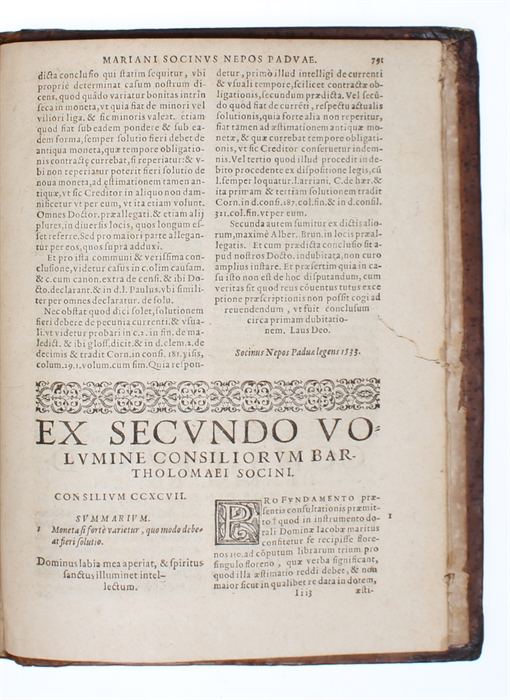 STANDARD WORK ON COINAGE - THE FIRST OF ITS KIND

Scarce first edition of one of the earliest - and most important - works on coinage, dealing with weight and measure, as well as the value and devaluation of money. Apart from the seminal original contribution of Budel, this extensive work contains 29 contributions by earlier philosophers and theologians on the subject, - "a compilation of almost every earlier treatise on the subject" - which, in a true Renaissance spirit, makes it the very first compilation in economic history." "De Monetis et re numaria" remained the standard work on the subject for almost two centuries". (Nussbaum, A Note on the Idea of World Money).

During the Renaissance, international banking saw a rise, which eventually resulted in a demand for one uniform European coinage. Budelius' thesis can be read as an ideological response to this demand, as he argued for precisely that: a unified market with one universal coinage. In this sense, his work anticipates by several hundred years many of the economic thoughts presented by the Classical economists during the second half of 18th century.

Budelius discusses the metallic view and the abuse of adulteration and falsification, and then attempts an exposition of how money may be coined in the most practical way. He then goes on to deal with the problem of how a debtor will meet his obligations if the coinage has been debased since the time the debt was contacted or the loan received. He maintaind that the same bullion value must be repaid although the coin may be depreciated - a view that was generally accepted at the time.
The third part of the work consists of a "compilation of almost every earlier treatise on the subject. In nearly all of them, the central problem is the same as the one discussed in the second book of Budelius' work". (Mariana ,The political economy of Juan de Mariana).

The general thesis of Budelius' work is that the trading partners should seek to use only one currency and that the law of coinage and money's "natural state" (an early reference to how money behave in the market) should be unified. In the period of the Cologne War, Germany had several different currencies and laws in relation to coinage and minting of coins. This not only restrained the domestic trade in Germany, it also lead to armed conflict which again resulted in a more fragmented economy. Budelius's work can be read as an attempt to unify Germany (and the rest of Europe) under one currency, which also would serve the purpose of stabilizing the highly volatile curriencies during this period: "The widely cited Rene Budel (1591) held it "to be indubitable that a Prince in the midst of costly wars, and therefore in great necessity, can order that money be made out of leather, bark, salt, or any material he wants, if he is careful to repair the loss inflicted thereby on the community with good and better money". (Cambridge Companion to Economic Thought).

In the sense of unifying Europe under one currency, Budelius seperates himself from not only Medieval monetary thinkers, but from his contemporary mercantilists as well: "The medieval literature on money is characterized by nascent nationalism, with the imagery of the body applied to the kingdom, and of money as the blood moving through its parts. Nicole Oresme’s De Moneta pointed out that if money is accumulated in the king’s treasury and withdrawn from circulation, it constitutes an abscess in the body." (Cambridge Companion to Economic Thought).

His comments represent the synthesis of two traditions, one uncovering the theoretical possibility of fiat money, the other uncovering its practical usefulness, as means of raising revenues in emergencies, from examples taken from history. Budelius cites examples of copper petty coinage in Germany and the Low countries, and gives examples of siege money. From Maastricht in 1579 (copper), Vienna in 1529 (lead), tin in Neuss, and even paper siege money in Leyden in 1574. He then writes: "I hold this to be indubitable, as I recall a little earlier, that a Prince in the midst of costly wars, and therefore in great necessity, can order that money be made out of leather, bark, salt, or any material he wants, if he is careful to repair the loss inflicted thereby on the community with good and better money." The insights of Budel about token money were to be tested by some experiments in the coming years and were carried further by important theorists in the Renaissance and later.

Budelius (1530-91), was a practitioner, a jurist by training, who worked as diplomat for the archbishop of Cologne, and later as mint-master in Westphalia for the duke of Bavaria. This is reflected in his practical and empirical approach to the economic challenges the Renaissance society was subjected to, unlike the more often seen theoretical and moral approach.