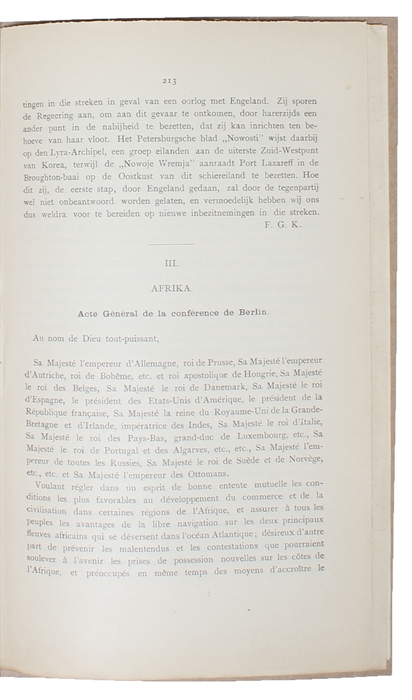 THE GENERAL ACT OF THE BERLIN CONFERENCE 1885

First printing of the first report on the The Berlin Conference (of 1884-85), also known as the Congo Conference or West Africa Conference. It sought to regulate European colonisation and trade in Africa during the New Imperialism period. The General Act of the Berlin Conference, can be seen as the formalization of the Scramble for Africa and is by far the most severe infringement ever on African sovereignty. The conference ushered in a period of heightened colonial activity by European powers, while simultaneously eliminating most existing forms of African autonomy and self-governance.

"For at a time when an estimated 80% of Africa remained under traditional and local control, the purpose of the Berlin Conference had been for the Great Powers to establish rules amongst themselves for the colonization of Africa and the exploitation of Africa's resources. Including the division of territory, the drawing of maps, and the establishment of Congo -- as a personal possession of the Belgian King. Not surprisingly, no Africans had been invited to the Conference." (Calmettes, Berlin 1885: The Division of Africa).

"Owing to the upsetting of Bismarck's carefully laid balance of power in European politics caused by Leopold's gamble and subsequent European race for colonies, Germany felt compelled to act and started launching expeditions of its own which frightened both British and French statesmen. Hoping to quickly soothe this brewing conflict, King Leopold II was able to convince France and Germany that common trade in Africa was in the best interests of all three countries. Under support from the British and the initiative of Portugal,Otto von Bismarck, German Chancellor, called on representatives of Austria-Hungary, Belgium, Denmark, France, the United Kingdom, Italy, the Netherlands, Portugal, Spain, Sweden-Norway (union until 1905), the Ottoman Empire and the United States to take part in the Berlin Conference to work out policy." (Ngoyo, Federation of the Free States of Africa).

The boarders drawn in Africa during the Berlin Conference had devastating consequences for Africa:" "The Berlin Conference was Africa's undoing in more ways than one. The colonial powers superimposed their domains on the African Continent. By the time Africa regained its independence after the late 1950s, the realm had acquired a legacy of political fragmentation that could neither be eliminated nor made to operate satisfactorily. The African politico-geographical map is thus a permanent liability that resulted from the three months of ignorant, greedy acquisitiveness during a period when Europe's search for minerals and markets had become insatiable." (Ibid).