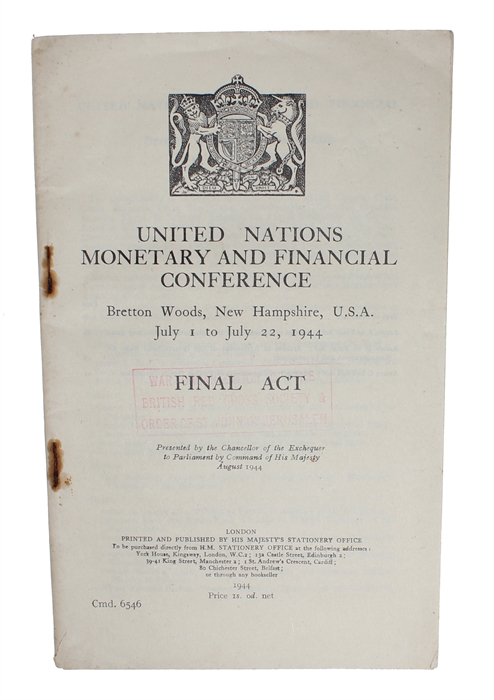 First European announcement of the establishment of the International Monetary Fund (IMF) at Bretton Woods in July 1944 - the greatest, most powerful and successful international economic agreement ever made.

44 Allied nations led by The United States and Great Britain sought to rebuild the international economic system while World War II was still going on. The Bretton Woods system obligated each country to adopt a monetary policy that maintained the exchange rate by tying its currency to the U.S. dollar and the ability of the IMF to bridge temporary imbalances of payments
The formation of the Bretton Woods system is by many considered the main factor in the economic prosperity experienced in Western Europe and the USA during the 50ies and 60ies thus shaping the world economy for decades. Regardless of the fact that some of the basic traits of the system (the gold standard) was abandoned in 1971 - usually referred to as the Nixon Shock - it is still the most influential economic event in the post war-years, if not the entire 20th century.

"The United States and Great Britain took the lead in constructing the postwar international monetary institutions, with John Maynard Keynes and Harry Dexter White drawing up rival designs for the new system. The Charter of the International Monetary Fund provided for a system based on pegged, but adjustable, exchange rates and an institution which would lend additional reserve assets to countries which were having temporary difficulties in maintaining convertibility. Resort to floating exchange rates, competitive devaluations, and trade restirctions to promote domestic employment were explicitly to be avoided, in the light of the problems of the 1930s".

The present publication was printed in August 1944, thus being first publication to introduce the Bretton Woods system to the British and European public and legislators.