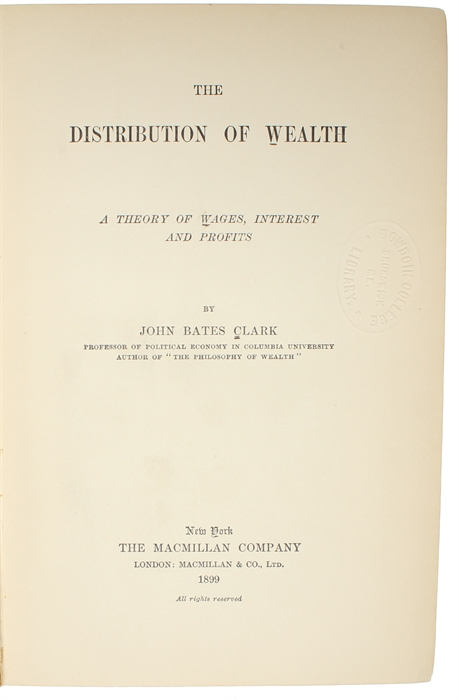 The Distribution of Wealth. A Theory of Wages, Interest and Profits.

London, The Macmillan Company, 1899. 8vo. In the original full cloth with gilt lettering to spine. Traces after removel of label on lower part of spine. Library labels pasted on to pasted down front free end-paper. Embossed library stamp to titbel page (not affecting text). Otherwise a fine copy. XXVIII, (2), 445, (3) pp.

The scarce first edition of Clark's seminal work - a cornerstone of neoclassical micro-economics -, which is considered "by any reasonable test, a landmark treatise in the development of economics". (New Palgrave). Clark "is regarded in some quarters as the one great American economist of the calibre of Smith and Mill". (Cohen, American Thought: A Critical Sketch, p. 117).

Clark here presented his famous theorem: Given competition and homogeneous factors of production labor and capital, the repartition of the social product will be according to the productivity of the last physical input of units of labor and capital. This theorem is one of the pillars of neoclassical micro-economics and was popularly formulated by Clark himself: "[W]hat a social class gets is, under natural law, what it contributes to the general output of industry."
"Very early in his career Clark began to work on the problem of factor shares (possibly because of his interest in Henry Georg) and concluded that the treatment of land rent as a surplus whose size is not determined by marginal productivity was gross error. The most complete statement of his views on distribution is in [The present work]. [...] Despite its flaws (which include the universal measure of value) 'the Distribution' is a remarkable book and, by any reasonable test, a landmark treatise in the development of economics.
The 'Distribution represents an advance on the prior art in two important respects. It offers a discussion of the relation of statics to dynamics - the terms was introduced into economics by Clark - superior to that of previous treatments. And it offers, for the first time, a complete and lucid exposition of the neo-classical theory of distribution." (The New Palgrave)

"One of the classics on the subject. "Aims "to show that the distribution of the income of society is controlled by a natural law, and that this law if it worked without friction, would give to every agent of production the amount of wealth which the agent creates." (A Select Bibliography of Modern Economic Theory, 1870-1929, P. 69).

John Bates Clark (1847 - 1938), American neoclassical economist, was one of the pioneers of the marginalist revolution and opponent to the Institutionalist school of economics, and spent most of his career teaching at Columbia University.