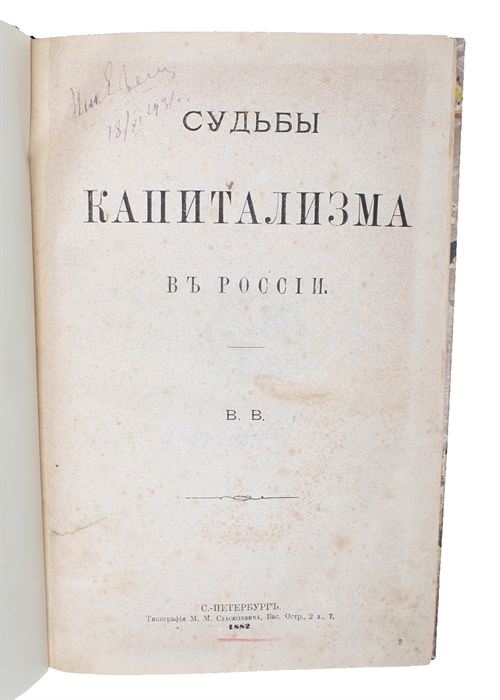 The exceedingly scarce first edition of this landmark work of Russian economics, being Vorontsov's seminal pre-revolutionary book "The Fate of Capitalism in Russia", which constitutes, not only the first serious attempt at analyzing Russian capitalism, but also one of the earliest (and the first Russian) theoretical statements of the assumption of economic development along non-capitalist lines. Vorontsov, together with Danielson - who was greatly inspired by the present work - is considered the major exponent of Narodnik (and pre-revolutionary) economics, of which the present work is essentially the epitome.

"In the 1880's, after the revolutionaries had clearly abandoned their indifferences to political forms, legal Populism became a distinctly separate movement with its own ideology. The common denominator linking the often very different members of this movement was the postulate of noncapitalist industrialization to be initiated and directed by the state, which would safeguard the interests of the small producers. The leading and most characteristic representative of this trend was V. P. Vorontsov (1847 - 1918). His book [the present] was the first ambitious attempt to analyze the specific features of Russian capitalism; at the same time, it was an original statement of the theoretical assumptions of economic development along noncapitalist lines." (Walicki, A History of Russian Thought)

Vorontsov argues that that Russia's lack of an adequate internal market and the continued vitality of the peasant commune in Russia precluded any possibility that capitalism could ever supplant the agrarian economy that existed there; the process of industrialization had been initiated in Russia but the backwardness compared to the rest of Europe meant that the industrialized mode of production would be kept in Europe, meaning Russia would have to import instead of export goods and thereby be kept on a comparatively low industrialization level due to the lack of internal market. Vorontsov, however, saw this as a not necessarily negative development. He wrote:
"The countries which are latecomers to the avenue of history have a great privilege in comparison with their foregoers, a privilege consisting in the fact that the accumulated historical experience of other countries enables them to work out a relatively true image of their next step and to strive for what others have already achieved not instinctively but consciously, not groping in the dark but knowing what should be avoided on the way." [From the present work].

Vorontsov was one of the first Russian economists to study the works of Karl Marx, the historical materialism of whom he was strongly influenced by. Vorontsov, inspired by Marx, maintained that crises are caused by production of surplus value, which becomes the real purpose of the economy under capitalist relations. The "problem of the home market" and the excess of production over consumption are manifestations of the fact that the capitalist class is not in a position to consume the entire surplus value produced. Vorontsov had therefore worked out a Marxist version of the underconsumption approach, which converged with the one first introduced by Malthus: Crises emanate from "over-saving," or, in Marxist terms, from the inability of the capitalists to consume surplus value.

"The views of the other Marxist theoreticians of the Narodnik current, first and foremost Nikolai Danielson, who in 1891 presented his theses in comprehensive form in his "Outlines of our Social Economy after the Reform" converged with the basic conclusions of Vorontsov's analysis: inability of the economy to absorb the product generated owing to capitalism's inherent tendency to increase production beyond society's ability to consume. Within this framework, Danielson is nevertheless to be distinguished from Vorontsov as regards the factors that cause underconsumption: contraction in the purchasing power of the popular masses (and not the inability of capitalists to consume the surplus value)." (MILIOS, Tugan-Baranowsky and Effective Demand)

The present work had a profound influence upon the Narodnik movement and is considered the movements economic background. It is commonly rendered as "populism" or "peopleism", an ideology which took "peasant collectivism as a vehicle for non-capitalist development in Russia. The Narodnik movement developed along two paths: The intellectual, media based approach (The most influential and to which Vorontsov belonged) and the revolutionary agitation against the Tsardom. Though their movement achieved little in its own time, the Narodniks were in many ways the intellectual and political forebearers of the socialist revolutionaries, who went on to greatly influence Russian history in the 20th century.