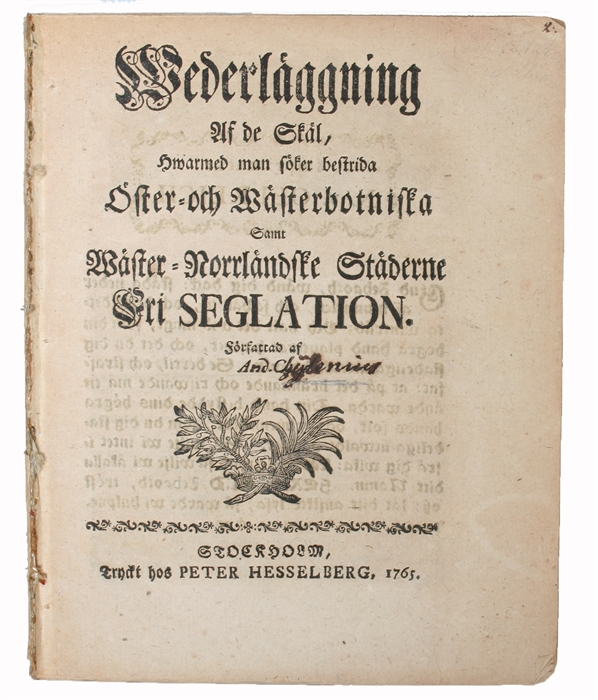 First edition of Chydenius' exceedingly important and influential publication on the benefits of the free market and trade of the surrounding area of Stockhom. Here Chydenius puts forth economic ideas that anticipate Adam Smith's economic liberalism, as presented in his Wealth of Nations, by eleven years.

Up until 1765, Stockholm had the monopoly on selling tar in the Gulf of Bothnia and the Northern part of the Baltic Sea. This meant that all producers of tar had to sell their goods to merchants in Stockholm, who thereafter sold the tar on the international market and thereby made the biggest profit. The publication of the present book secured a parliamentary debate which shortly after resulted in the breaking of the monopoly.
This had profound economic consequences for the Gamlakarleby, Vasa, Björneborg, Uleåborg and Ostrobothnia in general, since development and prosperity was secured.

"Unquestionably the most important of the Swedish economists was Anders Chydenius, a clergyman in Finland. In 1765, a torrent of extremely radical brochures from his pen suddenly burst forth in Stockholm where he was attending the riksdag as a member of the estate of the clergy. As a stylist he had few if any equals in the history of Swedish social science. It is no exaggeration to say that he is the most captivating writer within that field ever to appear in Sweden, and that his works even today still vibrate with life and excitement."( Heckscher, An economic history of Sweden, p. 204.)

Later in 1765 Chydenius also published what is often regarded as his most important book: Den Nationnale Winsten (i.e. The National Gain), in which Chydenius attacks the export subsidy as an example of the harmful effects of government intervention on the domestic economy. This work is usually compared to Adam Smith's Wealth of Nations since it is a description of the market in general and not focused on a specific areas or goods. The offered work, however, anticipates these exact thoughts but presents them in a different context.
Chydenius never knew about Adam Smith, Locke, Hume and Davenant, which only emphasizes his visionary thoughts.

Not in Kress, Cossa, Einaudi, Goldsmiths, Hollander or Menger.

OCLC lists only one copy, in the National Library of Sweden.