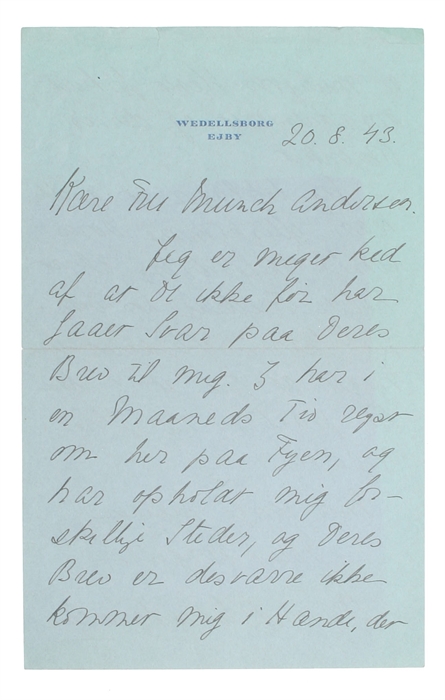 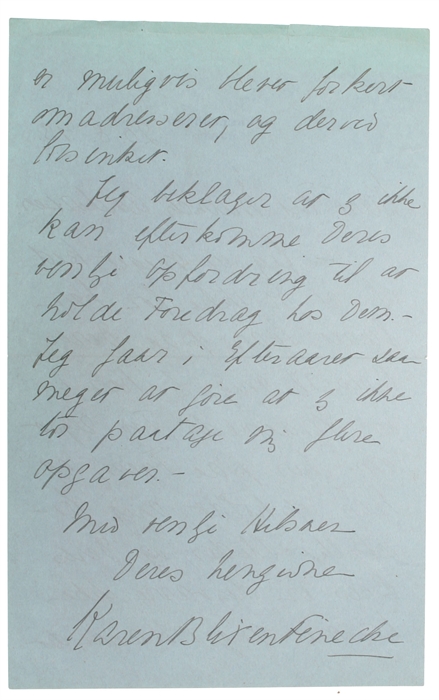 A HANDWRITTEN LETTER FROM THE AUTHOR OF "OUT OF AFRICA"

2 pages 8vo. Written on blue paper w. the letterhead "Wedellsborg/ Ejby." The letter is a polite refusal to an invitation to give a lecture. It translates as thus: "I am very sorry/ that that you have not/ received an answer to your letter/ sooner. For about a month/ I have been travelling around Funen, and/ I have been staying numerous/ places, and unfortunately I have not/ received your letter, there/ has possibly been an incorrect re-addressing and thereby delay./ I am sorry that I can/ not accept your/ kind request to/ give a lecture at your place. -/ In the fall I will/ have so much to do that I can/ not accept any more/ engagements. -/ Kind regards/ Yours sincerely/ Karen Blixen-Finecke."

The legendary Danish writer, Karen Blixen-Finecke (pseudonym: Isak Dinesen) (1885-1962), was a Danish baroness, who married her cousin, the Swedish Baron Bror Blixen-Finecke, in 1914. They soon moved to Africa, where they ran a coffee-farm near Nairobi, and the happiest years of Blixen's life were spent here (she used to say that "Africa made me"). The farm in the Ngong Hills is the centre of her world famous novel, "Out of Africa". She divorced her husband, who was cheating on her and gave her syphilis, in 1922, and in 1932 she moved back to Denmark after the farm had gone bankrupt and her lover, Denys Finch-Hatton, had died in a plane-crash. She spent the remaining 30 years of her life in Denmark, and died a legendary writer. She greatly influenced writers and cultural personas of the generations to come, and many authors recognize the direct impact she has had on their writings. Several of her novels have been filmatized, most famously "out of Africa" with Meryl Streep and Robert Redford, she was nominated for the Nobel Prize twice, she was elected honorary member of "The American Academy of Arts and Letters" (1957), and her portrait is printed on the Danish 50 kr. notes. She is the absolutely most famous of all modern Danish writers, and the only one of international fame.