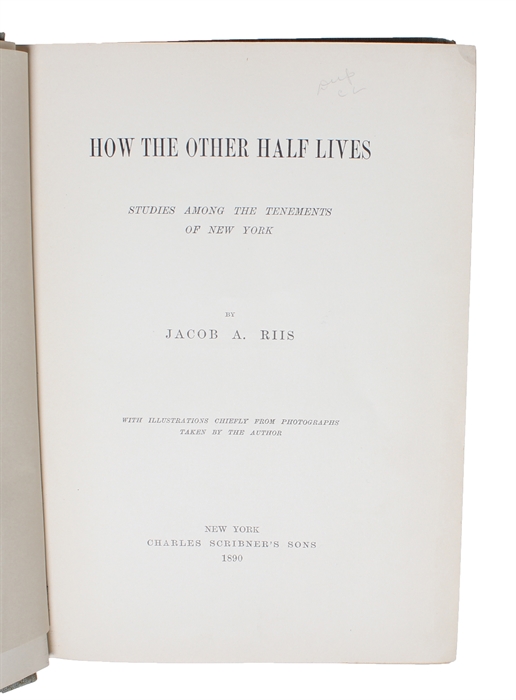 How the Other Half Lives. Studies Among the Tenemants of New York. With Illustrations chiefly from Photographs taken by the Author.

New York, Charles Scribner's Sons, 1890. Lex 8vo. Original blue full clothWith title in blue to front board and blue and gilt lettering to spine. Spine and parts of boards lightly brownspotted. A bit of wear to capitaks and corners. But overall a very nice copy of this fairly fragile and delicate cloth binding (there is an original variant binding with cloth spine and illustrated boards, but no precidency between the bindings has been established). Internally very nice and clean. XV, (1), 304 pp. Wih numerous illustrations, most of them photographic.

First edition of this landmark work on the miserable living conditions of the poor immigrants in New York, constituting one of the very earliest - and certainly the most popular and influential - attempts at making "the other half", i.e. the middle and upper classes, aware of how the poor in New York actually lived.

Riis's work created attention to the neglected and overseen community that was the underprivileged in New York. In the long run, the great success of the work created attention to the status, living conditions and general health of the poor, and it initiated social reform movements in all major North American cities. Furthermore, the work is regarded the very first example of "muckraking" journalism and was the first to extensively use halftone photographic reproductions in a book.

Riis used a convincing combination of facts from Dr. Roger S. Tracy, Registrar of Vital Statistics, and his own talents as a photo journalist to make a hitherto unseen powerful description of the correlation between the high crime rate, drunkenness and reckless behavior of the poor and their lack of proper homes. The statistical facts made it a relevant and sober work and lent it enough authority to the book's claims for it to be taken serious by city official. His groundbreaking photographs confirmed the dry numbers and "spoke directly to people's hearts". (Pascal, "Jacob Riis: Reporter and Reformer", p. 87).

Unlike all previously works on the living conditions of the poor, "How the Other Half Lives" offered concrete solutions on how to improve living condition, how to make the tenants improve their buildings, and finally how the politicians and city officials could make the appropriate and necessary juridical changes.

The effect of the work was immediately seen and included: the tearing down of New York's worst tenements, sweatshops, and the reformation of the city's schools. The book led to a decade of improvements in Lower East Side conditions, with garbage collection, sewers, and indoor plumbing all following soon after.

Because of the present work, Riis quickly rose to fame and in 1895 he became close friends with Theodore Roosevelt, then a New York City official, who wrote of Riis: "Jacob Riis, whom I am tempted to call the best American I ever knew, although he was already a young man when he came hither from Denmark". After Roosevelt became President, he wrote a tribute to Riis that started: "Recently a man, well qualified to pass judgment, alluded to Mr. Jacob A. Riis as "the most useful citizen of New York". Those fellow citizens of Mr. Riis who best know his work will be most apt to agree with this statement. The countless evils which lurk in the dark corners of our civic institutions, which stalk abroad in the slums, and have their permanent abode in the crowded tenement houses, have met in Mr. Riis the most formidable opponent ever encountered by them in New York City."

The title refers to the French writer François Rabelais, who famously wrote in Pantagruel: "one half of the world does not know how the other half lives". As a work of journalism and of social criticism, Riis's book still stands as a truly seminal testimony to how the lower classes lived at the turn of the century. Due to this work, attention was eventually paid to them and their conditions bettered.