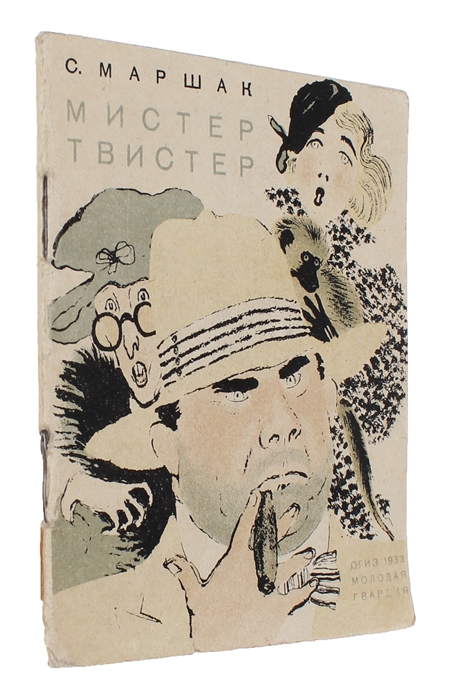 Mister Tvister. Risunki i obloschka V. Lebedeva [In Russian; i.e. Mister Twister. With Drawings and the Wrapper by V. Lebedev].

Leningrad - Moskva (Moscow), Molodaja Gvardija, 1933. 12mo. Stapled, in the original coloured illustrated wrappers: Some minor wear along spine, resulting in a tear to lower hinge, virtually no loss. A bit of minor soiling. A very fine copy of this fairly fragile publication. With many illustrations throughout. (18) ff.

The scarce first edition of Marschak's important political and social comment to Russian society, masked as a children's story. Marschak played a seminal role in the emergence of children's literature in Russia after the Revolution, and the present work constitutes a prime example of the political satire and comment for which this genre also served as a cover.

In pre-revolutionary Russia children literature had been in somewhat of a stand-still since the appearance of the first journal for children appeared in 1785. Throughout the entire 19th century texts by Russian authors were counted as children's literature, although they had by no means been written as such, e.g. works by Puschkin, Lermontov, Gogol, Turgenjev, Tolstoj etc., etc. There was no such thing as actual children's literature in its own right. Not until the 20th century did this change. With the political and social changes after the Revolution of 1917, the field of children's literature would change, and Marschak was at the centre of this change. He was the director of the actual children's periodical "The New Robinson", which hired authors to write stories specifically for children.

This must naturally have been a relief for the children, but as important was the fact that this sort of writing could become a refuge for the authors themselves. To a large extent the genre of children's literature was considered harmless and not something that was politically supervised; this meant that the authors could express them self much more freely here that they would normally be able to. And thus, it is among the children's literature around 1930 that we find some of the most politically interesting Russian works, Marschak's "Mister Twister" being a prime example.

The moral story of an American racist, who travels to Russia, refuses to stay in a hotel-room next door to a black man and ends up without a roof over his head, could be seen as a tale for children which instructs them in how to treat people equally and not look down upon others. But as much as this, and perhaps more, the present pamphlet is an ingenious piece of political satire which plays off socialism against capitalism. What would have been impossible in adult literature, becomes possible in that for children, and Marschak masters the ambiguity to perfection.
Furthermore, it is a work in which Marschak displays his thrill with the technical progress of Russia

The work appeared in German in 1933