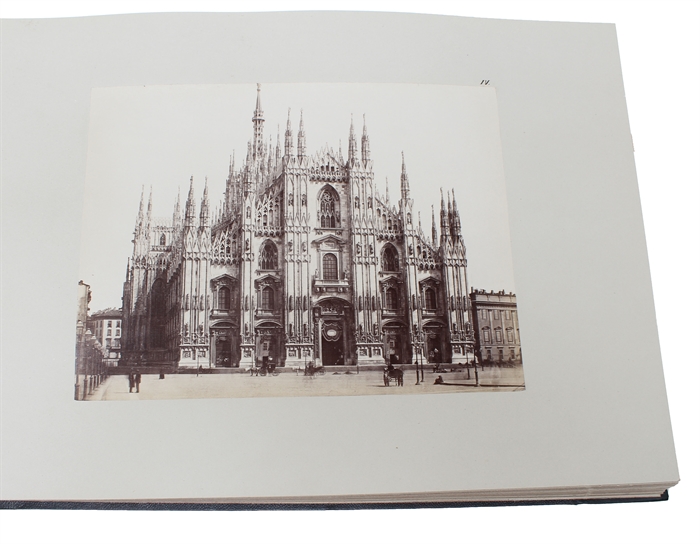 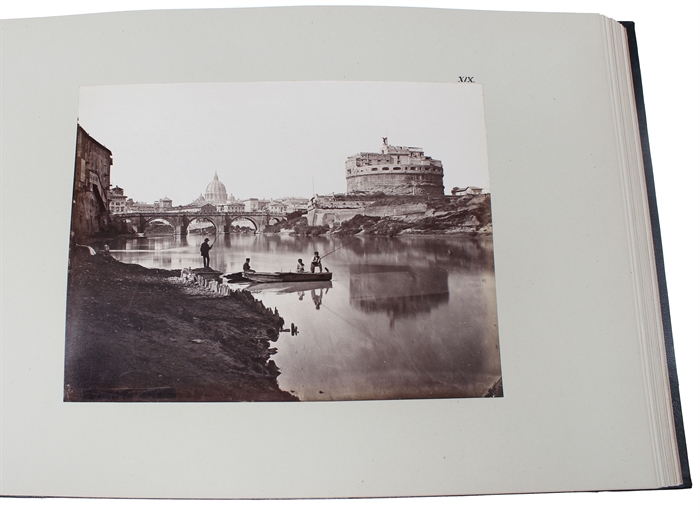 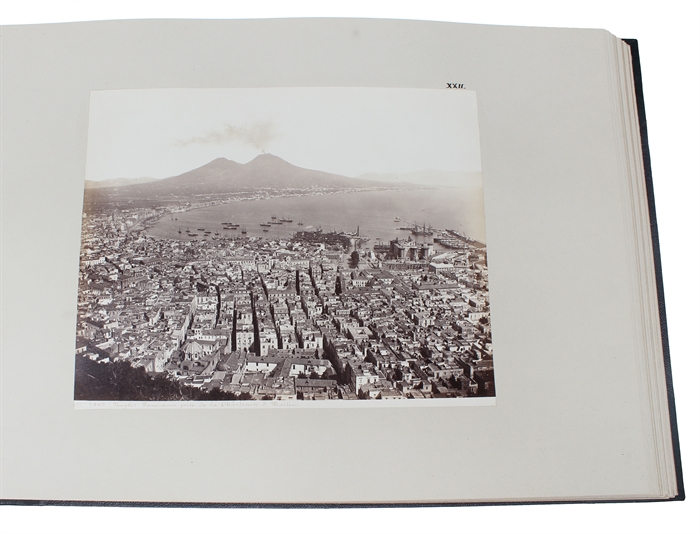 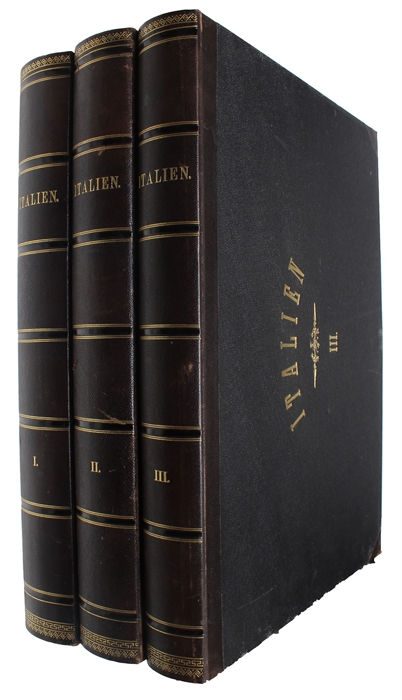 MAGNIFICENT COLLECTION OF PHOTOGRAPHS OF ITALY

[Circa 1870-1880]. An extensive series of 132 stunning photographs of Italy and Italian artwork, most measuring 25 x 17 cm, some slightly smaller, some slightly larger, all mounted on leaves measuring 30x42 cm. and bound in three exquisite near contemporary (ab. 1900) oblong black half morocco bindings with four raised bands, gilt spines, boards with elaborately gilt corners, gilt border and to the middle of front boards a gilt vignette, gilt title ("Italian" i.e. either Norwegian or Danish for Italy). and gilt volume-number. Housed in three equally elegant half morocco boxes with with gilt spines, marbled edges, and with middle of boards corresponding to those of the bindings. The boxes are also from ab. 1900. The boxes have a few traces of wear, but all in all, the set is in splendid condition.
Many of the photographs have numberings and several of them also mention the motiv.

Volume I contains 46 photographs, 8 by (Giacomo or his son Carlo) Brogi, 1 by Pompeo Pozzi, 4 by Maug and 33 unsigned. Most of the pictures are of ancient Roman buildings and renaissance art works. A few of the photos are from Milan.

Volume II contains 49 photographs, 2 by Volpato and 2 by Brogi, the remaining 45 are unsigned. The first half depicts ancient Roman statues renaissance painting. The last part consists of photos portraying vast landscapes around the bay of Naples and Mount Vesuvius and cityscapes

An extensive and stunning collection of photographs from Italy, a splendid example of a Victorian Grand Tour photo album from Milan in the north down to Rome and ending in Napoli, photos prepared while the traveler shopped and visited the Italian sites.

Photography studios in different Italian cities developed different specialties and were especially oriented towards the three genres of portraiture, views and art reproductions, of which the present collection is a fine example.
"Among the activities of the most renowned firms (Brogi and Pozzi), there was ample space for the reproduction of works of art and monuments most representative of the art historical tradition and natural beauty of Italy. Nature was not only seen as such, but as an integral part of the landscape, and essential element of a whole in which nature and history, culture and nature harmoniously balanced and completed each other". (Hannavy, Encyclopedia of Nineteenth Century Photography)
Most of the photographs by Brogi are presumably from his first Pompeii campaign from 1879-1880 which we exhibited in Milan the year after.