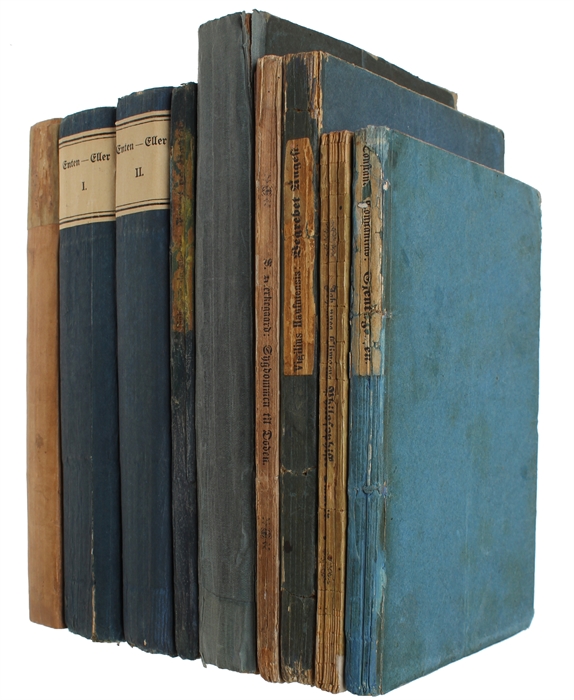 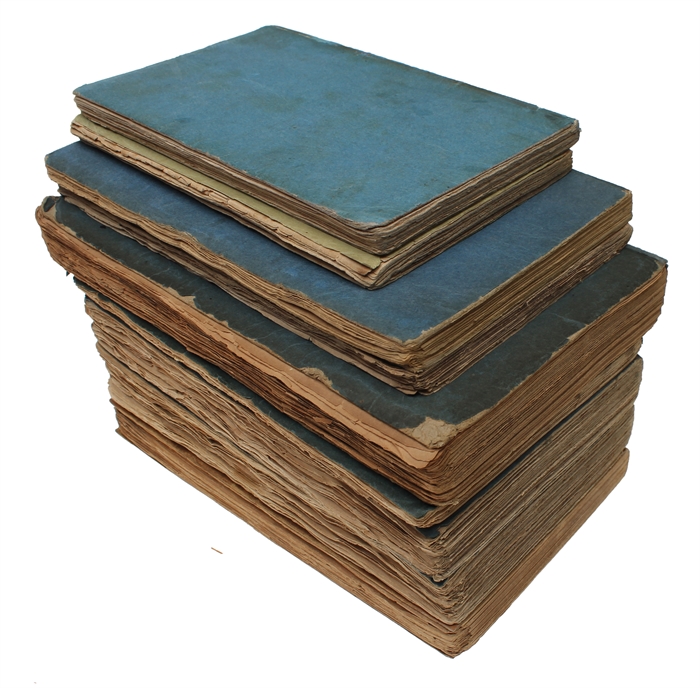 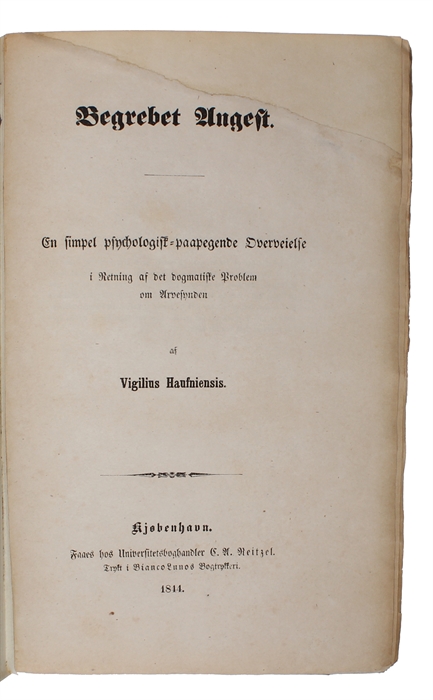 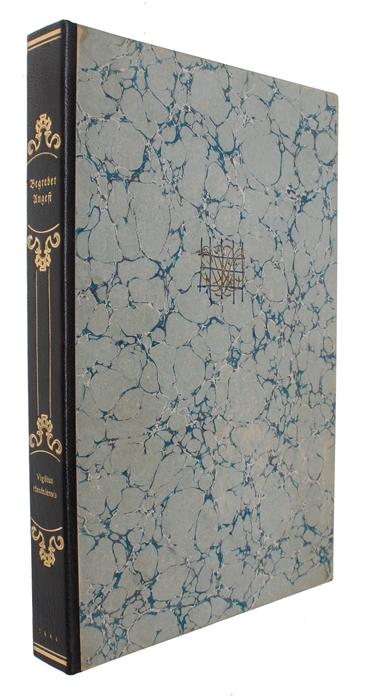 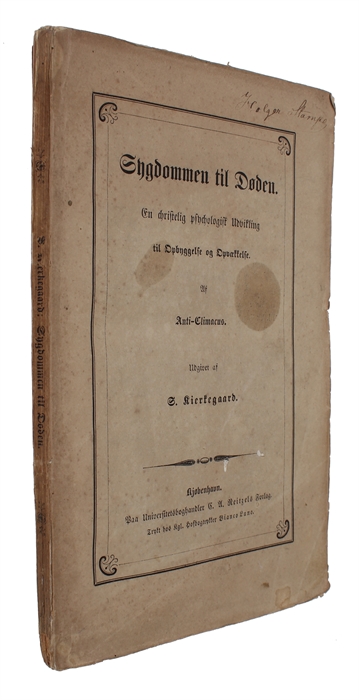 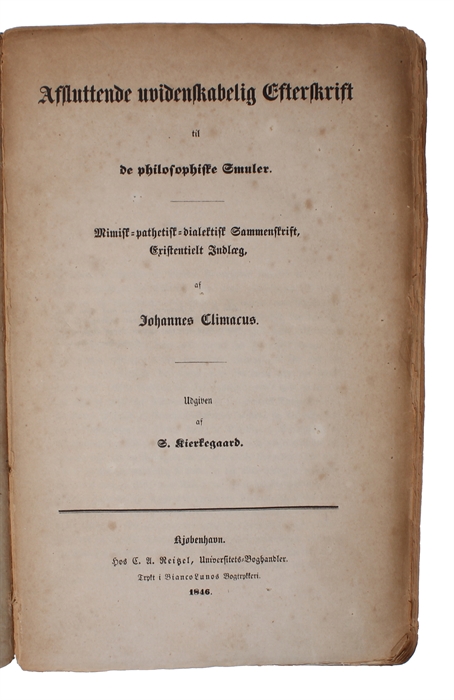 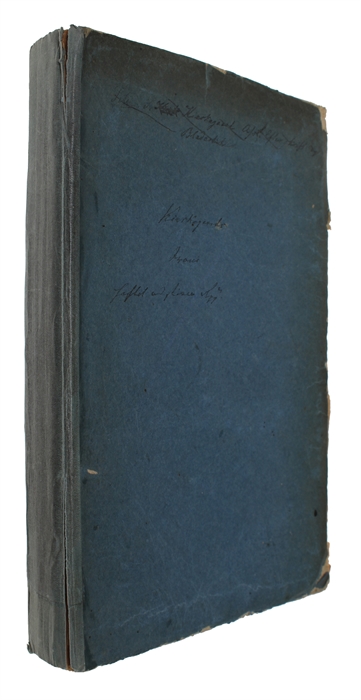 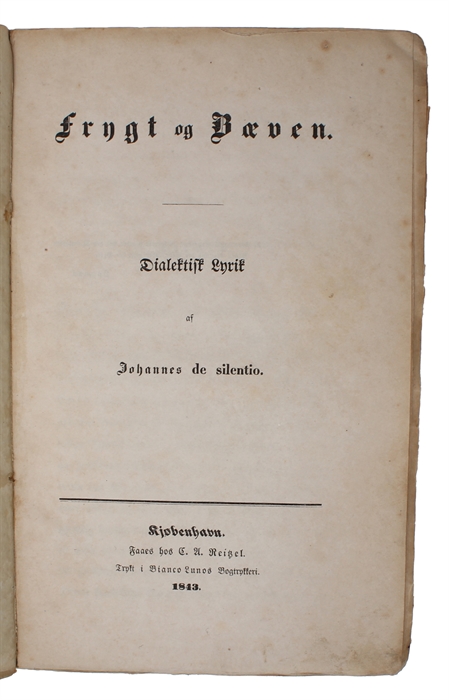 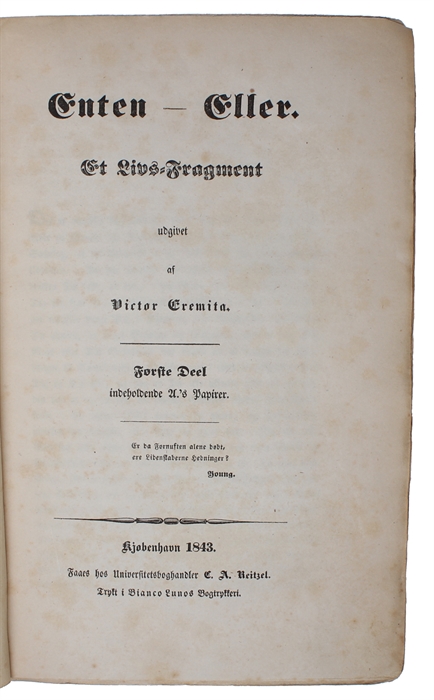 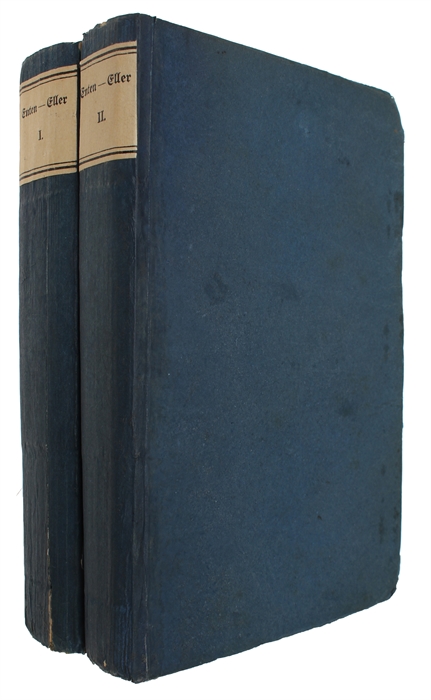 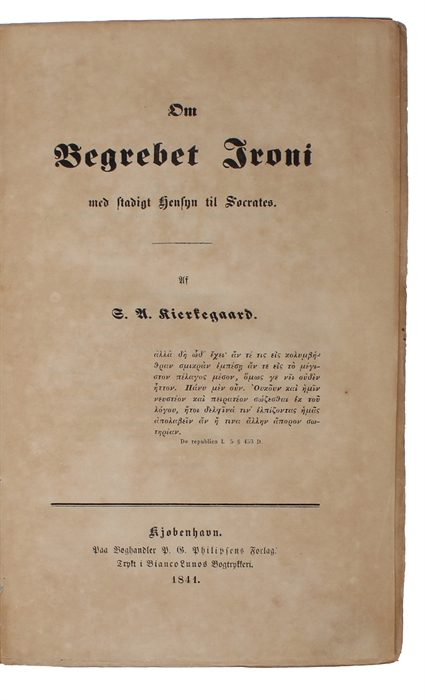 8 works, in nine volumes, all in original bindings/wrappers. Please see further description below.

A truly unique collection of first editions of the eight works that must be considered Kierkegaard's main works, all present in original condition - i.e. completely uncut and in either blue cardboard (called "hollanderet" binding), brown cardboard, or printed wrappers.

It is rare to find Kierkegaard's works in original state, as most of them were rebound almost immediately after having been purchased. The anonymous cardboard bindings of the larger volumes were a kind of interim binding that was meant to be replaced by a more permanent one at a book binder, and the wrappers that a few of his slimmer works were issued with, are quite fragile and hardly ever survive. The cardboard bindings don not have a hard spine, but merely thin paper glued directly on to spine, meaning that in the rare cases where one does find a Kierkegaard first edition in original binding, the spine is almost always gone or completely worn, leaving the stitching unprotected and often deteriorated. Thus, rebacking to some degree will almost always be the case, especially with the more comprehensive volumes, which it also is here.

Considering the scarcity of several of the individual volumes and that of original bindings and wrappers particularly, a collection as the present must be considered an extreme rarity possibly never to be seen again.

1. First edition of Kierkegaard's master's thesis, which constitutes the culmination of three years of extensive studies on Socrates.

8vo. Bound uncut in the original brown cardboardbinding. Rebacked with brown paper and corners of boards neatly restored. A bit of brownspotting as usual, but an excellent copy. (4), 350, (4) pp.

2. First edition of the work that founded existentialism. Kierkegaard's monumental magnum opus, Either-Or, seminally influenced later as well as contemporary philosophy and ranks as one of the most important works modern philosophy.

2 vols. 8vo. Uncut in the original blue cardboard-bindings, re-backed in perfectly matching blue paper and with pastiche paper title-labels to spines. A bit of wear to extremities. Apart from a bit of brownspotting, mostly to the first two leaves of each volume, the copy is in magnificent condition and unusually fresh and clean. XX, (2), 470 pp.; (8), 368 pp.

Though all original Kierkegaard-bindings are rare, those of Either-Or are even more so, and very few copies are known to exist in this state. Only one copy has been registered for sale, and none in any institutions as far as we are aware. The copy naturally also contains the often lacking half-titles.

3. First edition of one of Kierkegaard's most important and sought-after works, "Fear and Trembling", which is rather more difficult to find in the first edition than many of his other works. The work represents his earliest important questioning of German idealism. "Fear and Trembling" constitutes a poetical-philosophical reflection on the story of God's command to Abraham to sacrifice Isaac as a test of his faith and poses the fundamental question whether there is an absolute duty to God and whether Abraham's action was justified or murder. Faith is presented as a paradox that eludes reason, and he challenges the ethics and immanent philosophy of Kant and Hegel.

8vo. Uncut in the original blue cardboard-binding. Spine restored, preserving most of the original printed paper title-label (through printing difficult to read). Old owner's signatures to inside of front board. Some brownspotting, as always, but overall very nice. VIII, 135 pp.

4. First edition of Kierkegaard's important work on the theory of repetition and the philosophical contents of the phenomenon. For Kierkegaard, repetition is to be likened to recollection, and as he himself states on the first page of the work: "You can say whatever you wish about it [repetition], it will play a very important role in recent philosophy; for Repetition is a decisive expression for what "Recollection" was for the Greeks. Just like when they taught that all perception is a recollection, so the new philosophy will teach that all of life is a repetition."

8vo. Uncut in original blue cardboard-binding. Spine neatly restored and strengthened, preserving almost all of the original printed title-label. A bit of wear to extremities and some brownspotting, as always. Old owner's name to top of title-page. 157 pp.

5. First edition of "Philosophical Fragments", which by many is considered Kierkegaard's actual religious-philosophical main work. It is the first book written under the important pseudonum Johannes Climacus, and it is here that Kierkegaard unfolds the tension between philosophy and religion, in an attempt to find an historical onset for eternal consciousness, opposing the ideological thought inherited by Plato, Aristotle and Hegel.

Small 8vo. Uncut in the original printed wrappers. Lacking a small part of the lower corner of front wrapper, far from affecting the imprint - restored. Also with a small restoration to lower back hinge of back wrapper. Some tiny ink dot to top of wrappers and slight wear to extremities. Spine worn and with loss of paper to top and bottom, but stable and fine, and most of the printed title legible. Brownspotting, as always. 164 pp.

6. The very rare first edition of Kierkegaard's seminal "Concept of Dread", which formed the basis for existential psychology, and in which Kierkegaard heavily attacks the philosophy of Hegel.

Apart from "Sexten opbyggelige Taler" (the amputated "Atten opbyggelige Taler" -without the two that were quickly sold out), this is the rarest of Kierkegaard's works. It is said to have appeared in 250 copies (and the other works in about 525), which has not actually been verified, but it is a fact that it was issued in a significantly smaller number than the other works and is thus the hardest to come by. This work in the original binding is an extremely rare survival.

8vo. Uncut in the original blue cardboard-binding. Minor wear to extremities, mostly the spine, which, however, is incredibly well preserved, including the entire printed paper title-label, which is quite extraordinary. A neat restoration to blank top of title-page, far from affecting imprint, and a vague damp stain to upper blank margin of the last leaves. A remarkably well preserved copy. Ex libris and previous owner's annotations to inside of front board. (8), 184 pp.
Housed in a beautiful custom-made half morocco box with elegant pastiche-gliding to the spine. Gilt super ex-libris to front board. (box signed Anker Kysters Eftf. And gilding by Hagel Olsen).

7. First edition of this highly important major work by Kierkegaard, the "Postscript", by many considered his second magnum opus. Besides being one of the most philosophically important of Kierkegaard's publications, this work reveals one of the most important "secrets" of this philosophical giant: The authorship of not only his main work and the main work of existentialism, "Either-Or", but also of all of his pseudonymous works.

Nothing that Kierkegaard did was left to chance, which is also reflected in his carefully chosen pseudonyms and everything that came with them, e.g. his presentation inscriptions, which carefully followed the pseudonym of the book, so that he never signed himself the author, if his Christian name was not listed as the author on the title-page.

This carefulness also applied to the publication of his works, and his "Postscript" is one of the most carefully planned ones. The format of the book is large, 145 x 230 mm, and it is comprehensive - 480 pages followed by 6 unpaginated ones, the last four of which contain his greatly important and carefully chosen revelation of the true authorship of all the pseudonymous writings, under the headline "A First and Last Explanation". The pages are left unpaginated, divided from the rest of the book with a blank leaf and printed with a smaller type, which clearly indicates for the reader that these pages are not part of the actual text, but something different that must be noticed.

The postscript to the "Postscript" begins thus (own translation): "For the sake of manners and etiquette I hereby acknowledge, what can hardly in reality be of interest to anybody to know, that I am, as one says, the author of Either-Or (Victor Eremita), Copenhagen in February 1843; Fear and Trembling (Johannes de Silentio), 1843; Repetition (ConstantinConstantius) 1843; On the Concept of Dread (Virgilius Hafniensis) 1844; Preface (Nicolaus Notabene) 1844; Philosophical Fragments (Johannes Climacus) 1844; Stages on Life's Way (Hilarius Bogbinder: William Asham, The Assessor, Frater Taciturnus) 1845; Concluding Postscript to The Philosophical Fragments (Johannes Climacus) 1846; an article in "Fædrelandet", January 1846 (Frater Taciturnus)." And he then goes on to tell about the significance that his chosen pseudonyms bear, why he writes under these, and what his relationship to them is, -questions that none the less continue to puzzle philosophers to this day and which seem be bear part of the key to the question of the person Kierkegaard and his philosophical writings.

Large 8vo. Uncut in the original blue cardboard binding. Some wear to corners, spine re-backed with matching paper, and some contemporary annotations to front board. A few leaves at the beginning have loosened from the stitching, but otherwise internally very nice, with minimal browning and almost no brownspotting. X, 480 pp., (1 f., -blank) (2 ff., -"A First and Last Explanation").

8. First edition of Kierkegaard's radical and comprehensive analysis of human nature, "The Sickness unto Death" - a foundational existentialist work, which has had a profound influence on the development of modern existentialism. Here, despair is likened with the Christian concept of sin and Kierkegaard's ideas of the finite and infinite parts of the human self are developed - concepts that we find again with Heidegger (his concept of "facticity") and Sartre (his concept of "transcendence).

8vo. Uncut in the original printed wrappers. Although slightly worn at extremities and spine, this is a remarkably well preserved copy with all of the printing on the spine fully legible. Two tiny worm holes to front wrapper and two other spots. Old owner's signature to top of front wrapper. A bit of brownspotting, as always. (8), 136 pp.