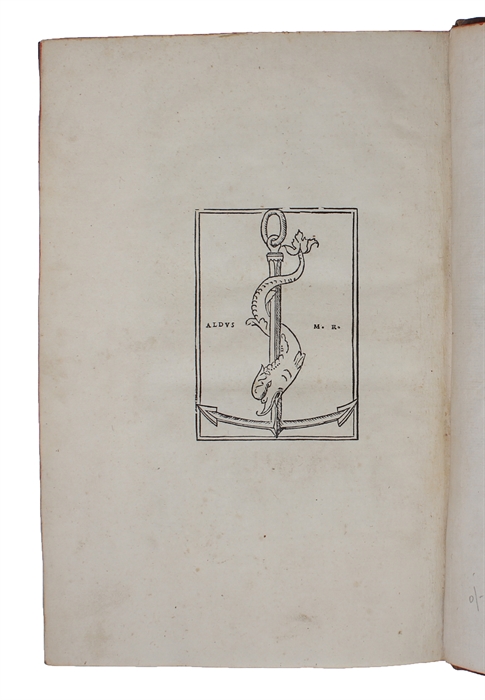 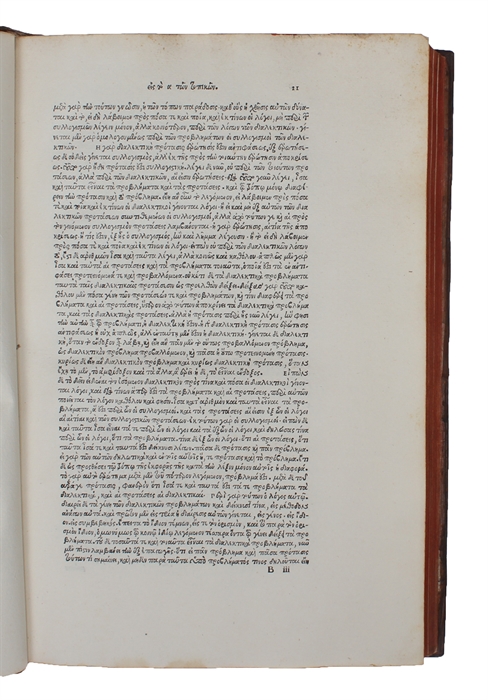 DISCOVERING THE FIRST PRINCIPLES OF THOUGHT

[Venice, House of Aldus and Andrea of Asola, September 1513].

Folio. A lovely late 17th or early 18th century full calf, beautifully re-backed to style with raised bands and elegant blindstamped ornametations. Boards with lovely blindstamp-decorations, in style constituting a forerunner of the Cambridge-style binding. A very nice, clean, and fresh copy with the often lacking final leaf with the large woodcut Aldine anchor-dolphin device to verso. Woodcut printer's device to title-page as well. Without the blank A9 (almost always removed when bound). (4), 3-281, (3) pp.

The scarce editio princeps of Alexander of Aphrodisias' extremely influential commentary of Aristotle's "Topics", which is responsible for our understanding and utilization of this most fundamental text for the thought of mankind. Aristotle's "Topics" occupies an absolutely central place in the development of science and philosophy since Antiquity. It is this work that sets the boundaries for what we can meaningfully talk about, and even how to talk about it. Through the "topics" mankind will be able to state the true premises that form the foundation upon we build science and philosophy. Alexander's commentary on this fundamental work is the most important and influential that we have. It was of the utmost importance to Renaissance philosophy, science, scholarship and learning, and it greatly influenced the path of Aristotelian scholarship as well as almost all original thought and philosophy within this period. Alexander came to influence all reading of Aristotle in the Renaissance and with his commentary on the "Topics", he came to profoundly influence our understanding of the first principles of thought as well as the dialectical and philosophical training that is necessary for our understanding of them.

Without the "topics" of Aristotle, we cannot be certain that we are discussing that which we ought to be discussing. Aristotle's "Topics" provides us with the general basis for all forms of inquiry; as he himself states: "Our treatise proposes to find a line of inquiry whereby we shall be able to reason from opinions that are generally accepted about every problem propounded to us, and also shall ourselves, when standing up to an argument that, avoid saying anything that will obstruct us." (Topica 110a18-22, in Ross' translation, Oxford, 1928).

"Alexander of Aphrodisias was the leading ancient commentator on Aristotle in the Aristotelian school. He wrote around AD 200, more than five hundred years after Aristotle's death. His commentaries had an immense influence first on the Neoplatonist school and then on Medieval Philosophy in Islam and eventually in the Latin West.
His commentary on "Topics" Book 1 opens the door on a major argument between the Stoics and the Aristotelians on how to think of syllogistic. He discusses how to define Aristotelian syllogistic and why it stands up against the rival Stoic theory of inference." (Richard Sorabji, Preface to Ophuijsen's Translation of Alexander's commentary, in the "Ancient Commentators on Aristotle"-series, ed. by Sorabji. p. (IX).).

It is a curious but generally accepted conception that with the rise of the Renaissance came the fall of Aristotle. Whether this is actually true can be disputed, but it is a fact that with the recovery of many lost works of ancient literature, the widening of the range of classical studies and the renewed interest in Plato, Aristotle was no longer the sole authority on a huge number of fields. That this should mean a total ignorance of the teachings of Aristotle must be considered somewhat of a myth (though a very frequently repeated one), and in fact with the grand humanists of the late 15th and early 16th century, the study of Aristotle fits perfectly with the broader comprehension of scholarship. The great humanists like Ficino, Pico and Pomponazzi had not forgotten about Aristotle, and the revival of learning did not mean the neglect of the prince of philosophers. On the contrary, with the appreciation of the knowledge of Greek and the invention of the printing, works were being printed like never before, which meant that the greatest of the humanists could be acquainted with the Greek texts of Aristotle and the Greek commentaries of "The Commentator", Alexander.

The present editio princeps of Alexander's commentary on the "Topics" is a prime example of this fundamental development. We here have the first printing of the interpretation of the greatest of all commentators of one of the most important works in the history of philosophy. The importance of this printing can hardly be overestimated, as it came to influence an entire generation of philosophers, humanists and thinkers. Among the wide range of thinkers of the following centuries that were profoundly influenced by Alexander's exposition of Aristotle's "Topics", we count for instance Descartes and Vico, to mention a copule.

Of course Aristotle's text was also read, but it was through the interpretation of Alexander that the influence of it was most widely felt. It was Alexander who modified Aristotelian doctrine in a more naturalistic and anti-Platonic direction that was more readily acceptable for the great "modern" thinkers.

"With reference to those works of Aristotle which were and remained the center of instruction in logic and natural philosophy, the most important changes derived from the fact that the works of the ancient Greek commentators became completely available in Latin between the late fifteenth and the end of the sixteenth centuries and were more and more used to balance the interpretations of the medieval Arabic and Latin commentators. The Middle Ages had known their works only in a very limited selection or through quotations in Averroes. ... When modern historians speak of Alexandrism as a current within Renaissance Aristotelianism that was opposed to Averroism, they are justified in part by the fact that the Greek commentators, that is Alexander and also Themistius, Simplicius, and many others, were increasingly drawn upon for the exposition of Aristotle." (Kristeller, Renaissance Thought and its sources, 1979, p. 45).

"The group of innovating "Alexandrists" who appear at the end of the century derive their name from Alexander of Aphrodisias, the best of the Greek commentators on Aristotle, whom they studied and cited; ... but the Averroists had likewise cited Alexander; his views they found discussed by the commentator himself. ... And we find strong Humanistic interests." (Randall in: Cassirer, Kristeller and Randall, The Renaissance Philosophy of Man, 1956, p. 260).

"Although the ancient commentators on Aristotle left a much larger literature than that surviving from Aristotle himself, only a few of their commentaries were known to the medieval West. In the four decades after 1490, the interpretations of Alexander, Themistius, Ammonius, Philoponus, Simplicius, and other Greek commentators were added to the familiar views of Averroes, Albert and Thomas, thus stimulating new solutions to Aristotelian problems." (Copenhaver & Schmitt, Renaissance Philosophy, 1992, pp. 13).

"Equally important for the continued growth of the Peripatetic synthesis was the recovery and diffusion of the Greek commentaries on Aristotle. These treatises, about ten times longer than the works they discuss, were written by pagans and Christians, Platonists and Peripatetics in late antiquity, between the second and seventh centuries in the Greek world of the Eastern Mediterranean, and then again in twelfth-century Byzantium. The most important of the two dozen commentators were Alexander of Aphrodisias, Ammonius, Simplicius, Themistius and John Philoponus. Of these five, only Alexander and Themistius were Aristotelians..." (Copenhaver & Schmitt, p. 68).

This magnificent first edition of the text was possibly reprinted in Venice, 1526 (Graesse states that it "est douteuse"). The first Latin translation followed in 1520 and appeared numerous times thereafter.