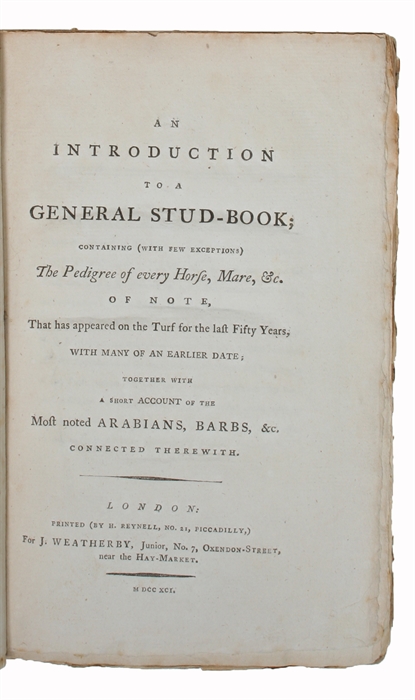 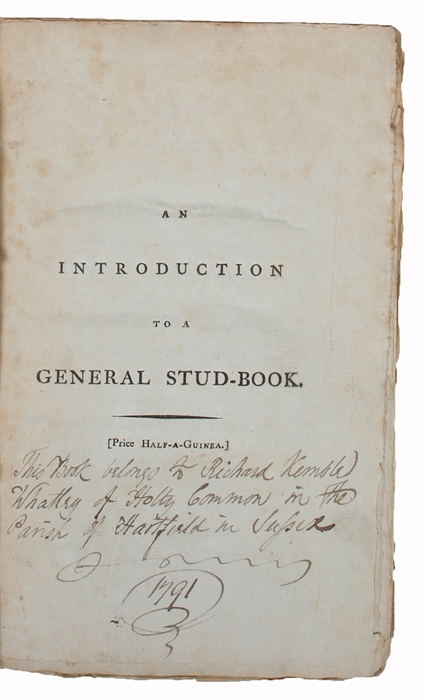 THE MOTHER OF ALL STUD BOOKS

An Introduction to a General Stud-Book; Containing (with few exceptions) The Pedigree of every Horse, Mare, &c. Of Note, That has appeared on the Turf for the last Fifty Years, With Many of an Earlier Date; Together with A Short Account of the Most noted Arabians, Barbs, &c. Connected Therewith.

8vo. Completely uncut in contemporary marbled boards. Rebacked. Very light occasional brownspotting. A nice copy. (14), XX, 207, (1) pp. With contemporary owner's inscription to half-title: "This book belongs to Richard Kemble/ Whatley of Holty Common in the/ Parish of Hartfield in Sussex/ 1791". Mr. Kemble Whatley has furthermore annotated the front end-papers with "A Memorandum of the weight of/ my Guns. - 1791. -", listing 5 guns, mostly of noted origin, e.g. one previously belonging to King George II.

Extremely scarce first edition of the original "mother" Stud Book for the Thoroughbred, being "[n]ot only the first Thoroughbred stud book, but the first published stud book of any breed." (Mackay-Smith).

This foundational work of race-horse breeding constitutes the first of its kind and is THE inevitable source-book for the history of thoroughbreds. It meticulously records the evolution of the British Thoroughbred and has acted as a blueprint of all other stud books worldwide. Being the forerunner of "The General Stud-Book", the definitive ancestry record for Thoroughbreds, continuously published by Weatherbys every four years since 1793, it contains information about all matings and births of Thoroughbreds in Britain and Ireland and as such, it constitutes the official foundation of racehorse selection and evolution.

"The publication in 1791 by Mr James Weatherby of Volume 1 of The General Stud Book was the key development in the emergence of the thoroughbred as a distinct equine breed. This first listing of notable horses of the day is the breed's founding register. It has been maintained ever since, with Weatherbys meticulously recording all thoroughbred births in Britain and Ireland.
The record now extends to 46 consecutive volumes, providing an unbroken ancestry record of the breed. All thoroughbred stud books around the world trace their origins to that first produced by Weatherbys." (British Horseracing Authority).

The thoroughbred horse is a breed of horse developed in the 18th century. English mares were bred to Arabian stallions in order to create a breed of horse capable of running great distances. All modern thoroughbred horses are descendants of three horses: the Darley Arabian, the Godolphin Arabian, and the Byerly Turk. The Bedouins maintained a strict registry of the breed in order to maintain its purity, but the first Thoroughbred "Stud Book" was created and maintained by James Weatherby in 1791, almost some 100 years following the importation of the three foundation stallions. This Stud Book listed the pedigrees of over 350 mares, each of them tracing their beginnings back to ECLIPSE - a descendent of the Darley Arabian, MATCHEM - a grandson of the Godolphin Arabian or HEROD - a great grandson of the Byerly Turk.

In 1770, James Weatherby became the secretary of the Jockey Club in England. According to Peter Willett in "A History of the General Stud-Book", Weatherby was so busy that he needed an assistant, so he hired his nephew, who was also named James. He gave him the responsibility of publishing "An Introduction to a General Stud-Book", which was based upon first-hand information. Weatherby actually went from breeder to breeder and gathered all the race-programs of the day, making sure that "[w]ith regard to the authenticity of the Pedigrees, nothing is here inserted for which there is not some authority; as little as possible is hazarded on uncertainty; and nothing upon conjecture" (Weatherby, Preface, p. XI). Upon completing this momentous task, "the two pillars of racehorse selection and evolution were in place," (Willett).

"WEATHERBYS" as the register is now known, appeared for the first time as it is here, in 1791, as "An Introduction to a General Stud-Book". This was later re-worked into "The General Stud Book", which appeared in 1793, and which was revised numerous times, most importantly in 1803, 1808, and 1827, 1859, and 1891. Weatherbys still appears every 4 years and is still considered the official register of Thorougbred horses.