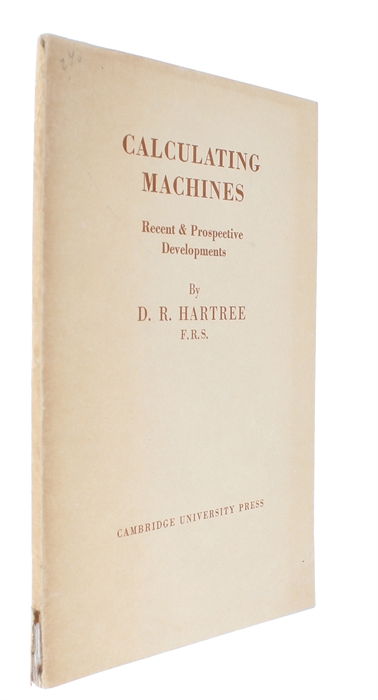 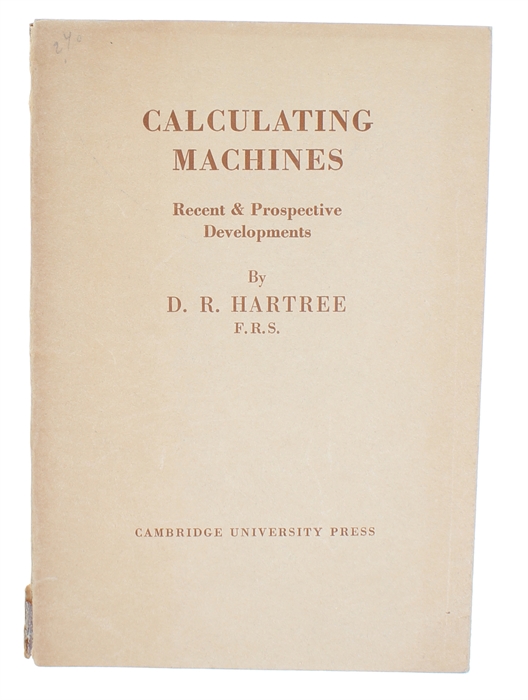 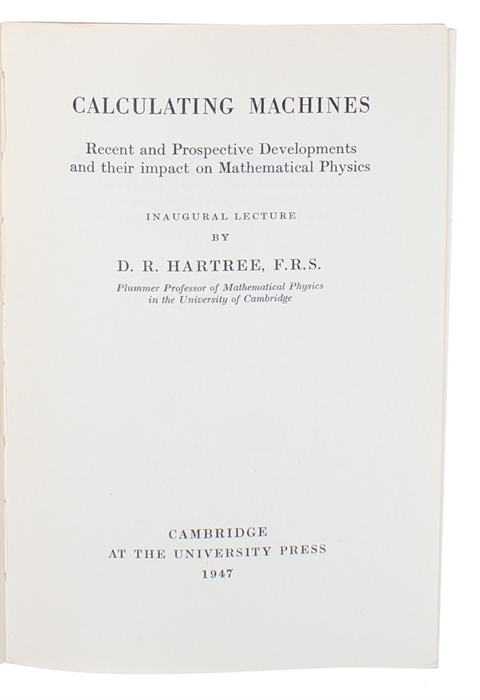 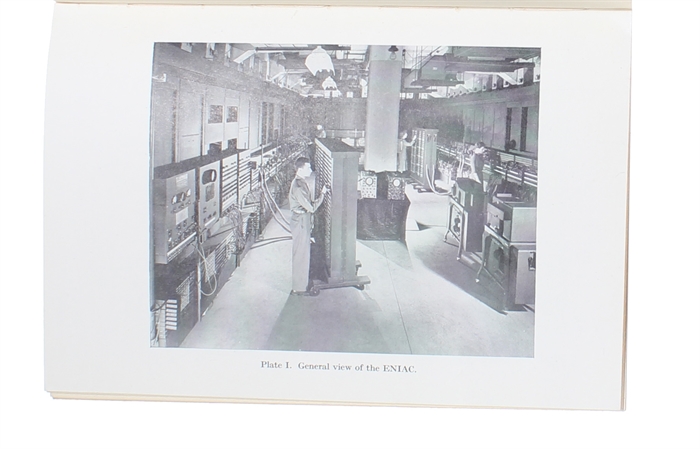 THE FIRST BOOKLET ON ELECTRONIC COMPUTERS

Calculating Machines: Recent and Prospective Developments and Their Impact on Mathematical Physics.

First printing of Hartree's famous inauguration speech, which not only "marks the introduction of the knowledge about electronic digital computing into Britain [...]" (Erwin Tomash Library, H31) but also constitute "the first booklet on electronic computers separately published by a conventional publisher, and also one of the earliest discussions of how these machines could be used in scientific calculations" (Origins of Cyberspace 649).
The present publication marks shift from computers being seen as a purely technical toy to an invention with a huge potential to the scientific community and society in general: "This can be seen as the start of Hartree's work on bringing computers and their potential to the attention of the scientific community." (DSB).

"It reports on information he acquired while on a research trip to the United States earlier in the year. During his visit he was able to use the new ENIAC to solve a problem of integrating differential equations. He points out that the entire computation and punching of the result took less than four minutes, and it would have taken a human at least two days to simply write down the out produced during that time, let alone do any calculations. Such computing power must have seemed like a dream come true to his audience, but Hartree went on to describe the new machines under development that would be much easier to set up, more flexible to use and, more importantly, have more storage for data than the ENIAC." (Erwin Tomash Library, H31).

"In 1945, Hartree paid an official visit to the United States on behalf of the British government, during which he visited the Harvard MARK I and ENIAC projects-both large-scale calculating machine projects. The ENIAC was built at the Moore School of Engineering at the University of Pennsylvania; it led directly to the development of the stored program computer concept, influencing computer design around the world. In 1946, Hartree again visited the ENIAC at the express invitation of the U.S. War Department in order to explore the ENIAC's application to scientific problems, with particular reference to the laminar boundary flow problem. Hartree was thus well placed to understand the advances being made in the United States and to promote computer development in the United Kingdom. It is unclear whether Hartree knew of the top secret Colossus machines built at Bletchley Park for code-breaking purposes, but he certainly moved in social and scientific circles with those who did. Hartree sat on advisory committees and executive groups and gave very positive support to the development of computers. In the late 1940s and early 1950s, electronic computers were developed in three main locations in the United Kingdom-at the University of Manchester, Cambridge University, and the National Physical Laboratory at Teddington. Hartree influenced all three projects, usually acting behind the scenes to promote, enable, or support the work." (DSB)